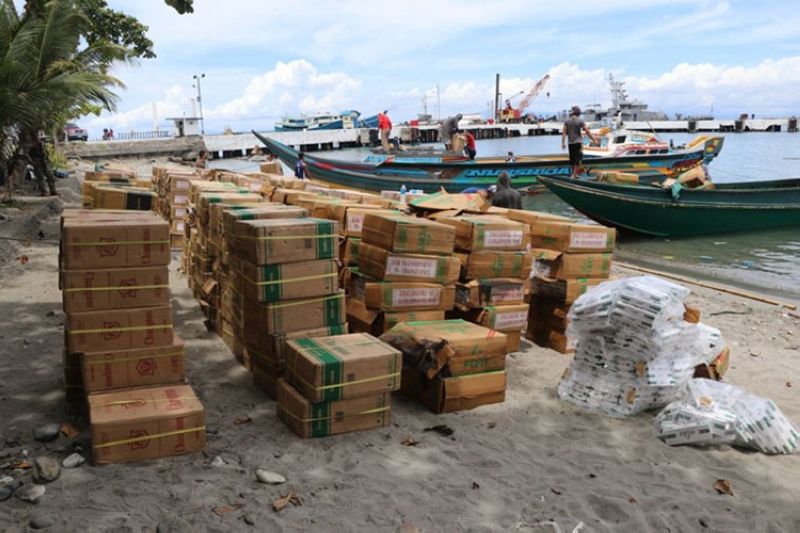 ZAMBOANGA. Operatives of the Naval Forces Western Mindanao in coordination with the Bureau of Customs seize early Monday, May 17, some P17.5 million worth of smuggled cigarettes off Zamboanga City. A photo handout shows the cigarettes and two watercrafts were taken to the shore of Naval Station Romulo Espaldon in Zamboanga City. (SunStar Zamboanga)

THE Naval Forces Western Mindanao (NFWM), in coordination with the Bureau of Customs (BOC), seized early Monday, May 17, some P17.5 million worth of smuggled cigarettes off Zamboanga City.

Adaci said /B Nurshida and M/B Dream Boy, both of which came from Sulu, were found to be loaded with 228 and 274 master cases of undocumented assorted cigarettes, respectively, when the NFWM and BOC personnel conducted Visit Board Search and Seizure Operations (VBSSO).

He said the two watercrafts were escorted to the Naval Station Romulo Espaldon, which houses the NFWM headquarters in the city for a joint inspection and inventory.

He said inspection and inventory showed that the watercrafts were carrying a total of 502 master cases of assorted smuggled cigarettes worth P17,570,000.

The seized items and vessels were turned over to the BOC for proper disposition, he added. (SunStar Zamboanga)