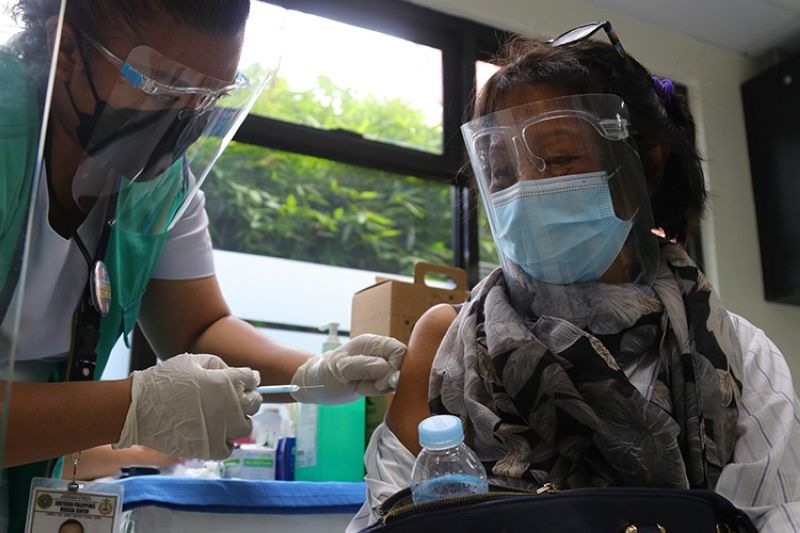 AFTER previously experiencing logistical delays, Pfizer-BioNTech’s BNT162b2, the third Covid-19 vaccine brand that arrived in Davao Region, has already been inoculated to senior citizens in Davao City on Monday, May 17, 2021.

The Department of Health (DOH)-Davao Region led the symbolic vaccination rollout of Pfizer-BioNTech at the Southern Philippines Medical Center (SPMC).

A total of 29,250 doses of Pfizer-BioNTech arrived on Wednesday afternoon, May 11, along with the 132,000 doses of AstraZeneca and 80 doses of Sinovac.

DOH-Davao Director Annabelle Yumang told the media that all Pfizer vaccines will be allotted in Davao City hospitals, particularly in Davao City, for now.

Pfizer-BioNTech's BNT162b2 is kept at a -70 degrees Celsius (°C) storage facility to ensure its efficacy.

Other provinces in the region will have their share once additional Pfizer vaccines will arrive, she said.

The health official said they will be spearheading simulation exercises in other parts of the region to ensure that the transportation of the vaccines will be effectively implemented.

Yumang said there will be temperature monitoring in transporting the vaccines to other areas to ensure the retention of their efficacy.

According to the initial reports coming from the national government, the next batch of Covid-19 vaccines is set to arrive in the first week of June. But this is still subject for change.

Admittedly, the current number of vaccines augmented in the region cannot cover those in the A2 group.

According to the May 9 data of DOH-Davao, a total of 353,268 have been enlisted in the vaccination rollout in the region. Yumang, however, said this number would still increase as pre-vaccine registration is still ongoing.

The Pfizer vaccines were supposed to arrive in the country, and in the region early March this year, based on the previous pronouncement of DOH-Davao.

However, due to a logistical problem, the arrival of the Pfizer vaccines, which has been reportedly 95 percent effective, has been delayed.

Since last week, Yumang said the region had already started the vaccine rollout to the Priority Group A2 or the senior citizens.

The health official noted a large queue of seniors lining up to get the vaccine.

In Davao City, Yumang said a 99-year-old woman even lined up to receive her first dose of Sinovac.

The Davao City Information Office identified the senior as Tomasa Pedrido, who was inoculated at Calinan Elementary School and is considered the oldest person in the city to receive the Covid-19 vaccine.

Yumang said that as of Monday, they have not yet received reports of seniors experiencing severe adverse effects of the vaccine.

Amelia Pleños, 63, was among those who were vaccinated with the Pfizer vaccine on the first day.

Pleños said she did not experience adverse effects after vaccination.

She did not have any hesitations of getting the vaccine since her cousins in the United States were also inoculated with the Pfizer vaccine.

"Actually, any vaccine will do. But based sa ako istorya sa akong cousin, gi-encourage ko niya na sulayan mag-take sa Pfizer (on my cousin, they encourage me to try Pfizer)," Pleños said.

With her experience, she encouraged her fellow seniors to take advantage of the vaccine rollout of the government.

BNT162b2 is the first Covid-19 vaccine to be issued with an emergency use authorization (EUA) from the Food and Drug Administration (FDA).

SPMC Chief Dr. Ricardo Audan, during the ceremony, said Pfizer vaccines are currently intended for the seniors, and even to the patients who had undergone kidney transplant.

Audan said Pfizer is currently the only vaccine in the world proven safe for kidney transplant patients.

The hospital chief also said the arrival of the Pfizer vaccines will accommodate individuals incompatible to receive with the Sinovac and Astrazeneca vaccines.

He said SPMC is currently the only hospital in the region capable of storing BNT162b2.

Meanwhile, he clarified that all vaccines are good, effective, and safe.

"Each vaccines that has received FDA authorization has been proven to decrease severe illness, hospitalization, and the worse outcome of Covid[-19] -- death," Audan said.

Despite being vaccinated, he reminded them to continuously observe the minimum health protocols to make the vaccine effective.