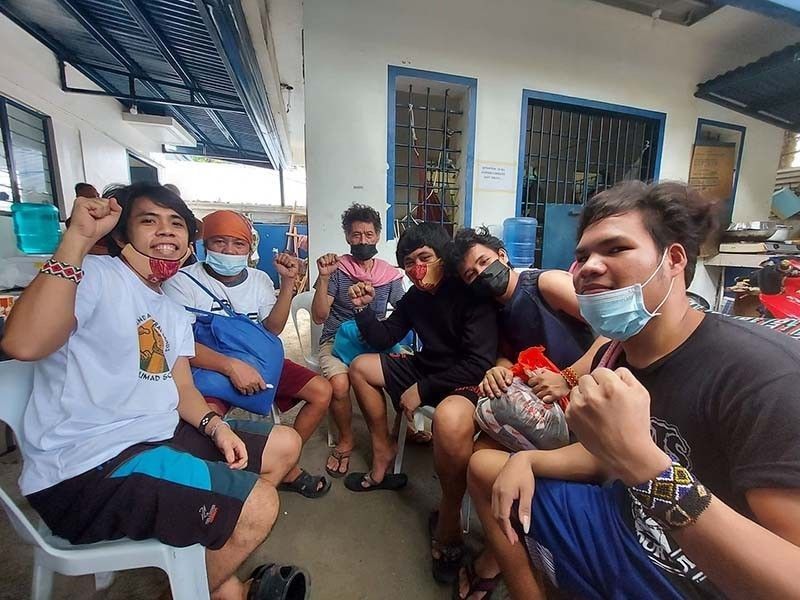 A NON-GOVERNMENT organization (NGO) is calling anew for the abolition of the National Task Force to End Local Communist Armed Conflict (NTF-Elcac) after its spokesperson Lorraine Badoy "launches another threat" to pursue the case against "Bakwit School 7," whose charges were recently dismissed.

Badoy said in a press conference on Tuesday afternoon, May 18, 2021, that they will assist the Lumad parents, whose children were reportedly kidnapped and brought to the retreat house of the Societas Verbi Divini Philippines Southern Province, University of San Carlos-Talamban campus in Cebu City, to file a motion for reconsideration.

"'Wag sila masyadong magdidiwang kasi butas na butas sila dito (They should not celebrate just yet because we noticed many loopholes here)," the NTF-Elcac official said.

In a forwarded statement, the Save Our Schools Network (SOS) said Badoy’s statement "shows malice and vindictiveness to persecute the Bakwit School 7 following the dismissal of trumped-up charges against them."

Earlier, the Office of the Provincial Prosecutor (OPP) of Davao del Norte in Tagum City ordered the immediate release of the "Bakwit School 7" after it dismissed the criminal charges filed against them by the Philippine National Police Anti-kidnapping Group (AKG) on Friday, May 14.

SOS said they were arrested by the Philippine National Police (PNP) "without a warrant" in a raid last February 15 in the USC campus in Cebu.

A total of 19 Lumad students and minors were taken in custody by the Department of Social Welfare and Development (DSWD)-Central Visayas.

"Badoy and the NTF-Elcac’s insistence that the students that the PNP mauled and detained were kidnapped by Lumad leaders and teachers only show that they only believe in their own lies. For that, we condemn the NTF-Elcac as they have destroyed the students' rights to education through red-tagging and militarizing the DepEd that led to the closure of Lumad schools in Mindanao," the group said.

"They will not stop at nothing to silence the Lumad who are fighting for their ancestral domain against state and corporate intervention," the group added.

SOS said it is calling for the abolition of NTF-Elcac, stressing that the task force "is nothing but lies and evil that destroys the spirit of solidarity that it has done to the Lumad, to the community pantry, to rights advocates."

According to its Facebook page, SOS is a network of child-focused NGOs, church-based groups and other stakeholders advocating for children's right to education

There have been moves to defund Elcac as several lawmakers joined calls to defund it, including Senate Minority Leader Franklin Drilon and Senator Joel Villanueva, who urged the realignment of the task force’s current budget to the government’s social amelioration program.

Drilon said there is no need to wait until the 2022 budget deliberations to defund the task force since President Rodrigo Duterte has the power to realign the budget.

At the House of Representatives, Gabriela Women’s Party Representative Arlene Brosas proposed that the P19.4-billion budget of the task force be considered among the sources of funding for the proposed P10,000 cash aid for the poor under the Bayanihan 3 bill.

However, Davao Oriental Governor Nelson Dayanghirang, who is also the chairperson of the Regional Peace and Order Council of Region 11 (RPOC-Davao), said in a previous statement that defunding the P19-billion budget of the NTF-Elcac will affect barangays who had fought to clear their communities from communist influence and insurgency.

"We appeal to those who are calling to defund the Elcac to open their hearts and minds to the plea of our people. Defunding the [Elcac] would be a huge disservice to these barangays who fought long and hard to clear their communities from communist influence and insurgency that has brought nothing but fear and poverty aggravated by violence," he said.

Signed into law by Duterte in December 2018, Executive Order 70 created the NTF-Elcac that institutionalized "a whole-of-nation approach in obtaining exclusive and sustainable peace, giving the government an effective solution against communist terrorists."