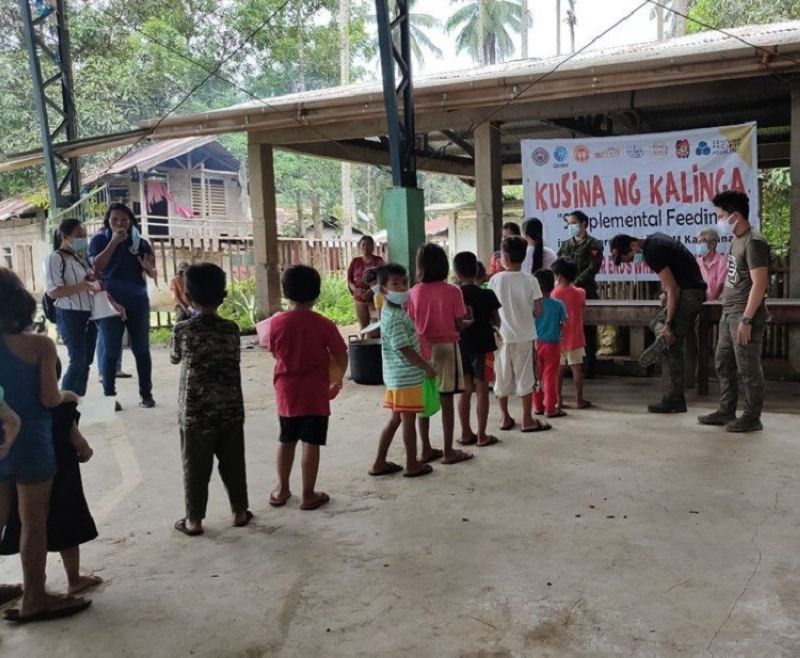 ZAMBOANGA. The Army’s 97th Infantry Battalion, through its Civil-Military Operations team, holds a feeding program that benefitted 300 persons in Seres village, Katipunan, Zamboanga del Norte. A photo handout shows children, who were served with chicken and pork and beans, lining up to receive their share of food. (SunStar Zamboanga)

A TOTAL of 300 individuals composed of kids, adults, pregnant, and senior citizens benefitted from a feeding program in a remote village in Zamboanga del Norte.

The recipients of the activity, held Monday, May 17, were residents of Seres village in Katipunan town, Zamboanga del Norte.

Lieutenant Colonel Manaros Boransing II, 97IB commander, said the feeding program was held in partnership with the municipal government and Gawad Kalinga of the same town.

The activity forms part of the 30-day “Kusina ng Kalinga” supplemental feeding launched on April 21 by the Gawad Kalinga and Katipunan municipal government, which is anchored on the theme “Hunger Ends Where Caring Begins.”

Boransing said the recipients in Seres village were served chicken with pork and beans.

The Gawad Kalinga flagship program to end hunger malnutrition aims to provide nutritious lunch meals to the community that cares for young ones by involving parents and other individuals who experience hunger, especially during this health pandemic.

Boransing thanked Gawad Kalinga for giving them the opportunity to help in their program to address hunger and poverty alleviation in the province of Zamboanga del Norte.

He added they hoped that more government agencies, local government units and non-government organizations would collaborate to address hunger and poverty alleviation not only in Zamboanga del Norte but in other areas as well. (SunStar Zamboanga)