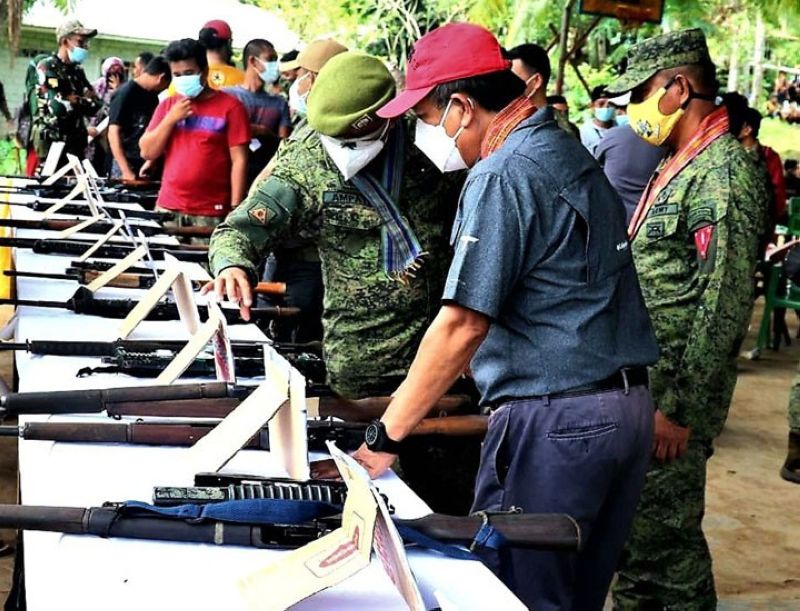 ZAMBOANGA. Military and provincial government officials of Basilan have entered into a Memorandum of Understanding (MOU) Friday, May 21, that seeks to intensify the implementation of the small arms and light weapons (SALW) program in the province. A photo handout shows Lieutenant Colonel Alex Ampati, 4th Special Forces Battalion commander (left), inspecting some surrendered firearms. (Contributed photo)

MILITARY and provincial government officials of Basilan have entered into a Memorandum of Understanding (MOU) that seeks to intensify the implementation of the small arms and light weapons (SALW) program in the province.

Basilan Governor Hadjiman Hataman-Salliman said the SALW program seeks to lessen, if not eradicate, the number of small arms and light weapons of individuals and groups to prevent them from creating havoc in the communities.

the implementation of the SALW program was initiated by the Basilan provincial government in partnership with the government’s Joint Normalization Committee headed Ariel Hernandez.

“Joint Task Force Basilan will continue to support our partners and stakeholders in all their endeavors for the attainment of our common goal that is to sustain peace in all the municipalities of Basilan,” Gobway said.

“Let us continue to work together to win lasting peace and progress in our respective community,” Vinluan added. (SunStar Zamboanga)