Pawikan of the gulf 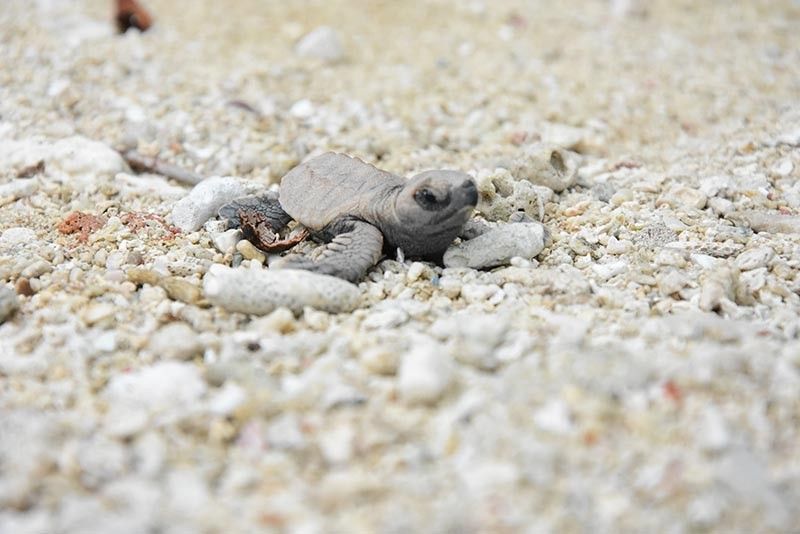 HATCHLING. A sea turtle hatchling released at the Cleanergy Park. The park serves as a nesting ground for the critically endangered Hawksbill sea turtle. (Photo by Davao Light) 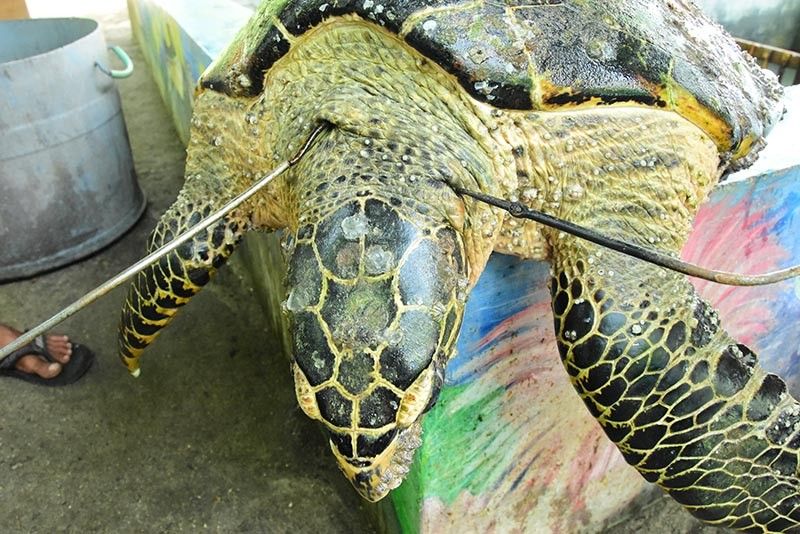 DUMALAG. The female Hawksbill sea turtle was found by fishermen at Dumalag with spears on its neck. The sea turtle is being rehabilitated at the Pawikan Rescue Center inside the Cleanergy Park. (Photo by Davao Light) 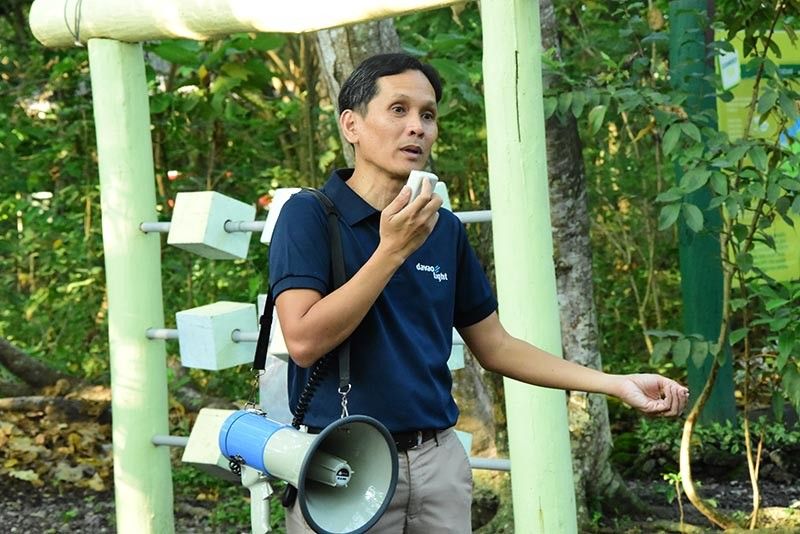 CLEANERGY PARK. Fermin Edillon, Davao Light and Power Company (Davao Light) Reputation Enhancement Department manager, said the Clenaergy Park has not only served as a nesting ground for sea turtles. It is also a thriving beach urban forest with around 100 species of birds. (Photo by Davao Light) 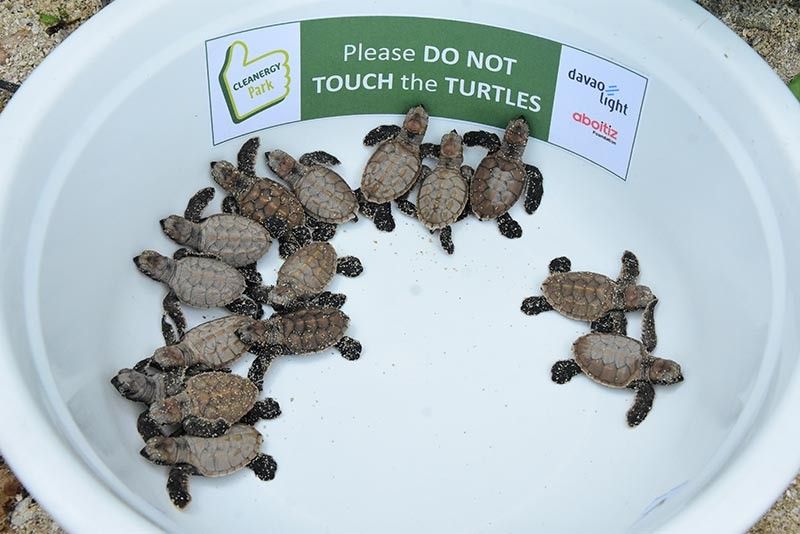 TO BE RELEASED. Since 2014, the Cleanergy Park has released 5,145 hatchlings into the wild. Sadly, only around one percent of sea turtle hatchlings reach adulthood. Some are eaten by predators immediately after they are released. (Photo by Davao Light) 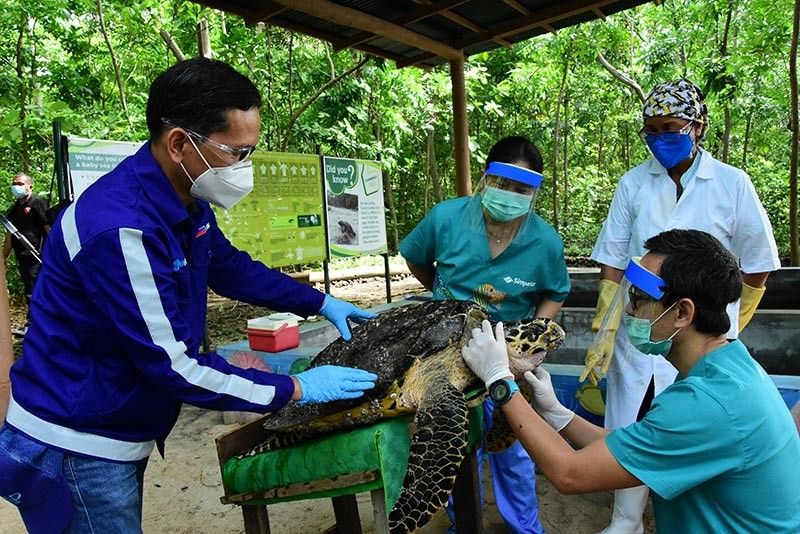 RESCUE. Several injured and captive sea turtles have been turned over at the Pawikan Rescue Center at Clenaergy Park for rehabilitation and treatment. (Photo by Davao Light) 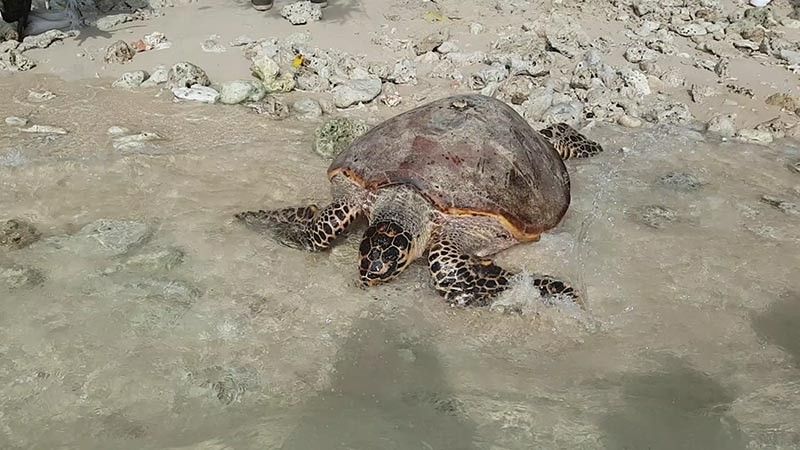 BACK HOME. Once the rehabilitated sea turtles have recovered and given a clean bill of health, they are released back to the sea. (Photo by Davao Light)

MAY 23 marks World Turtle Day, which was started by the American Tortoise Rescue, a nonprofit organization established in 1990.

According to the group, "The day was created as a yearly observance to help people celebrate and protect turtles and tortoises and their disappearing habitats around the world."

These sea turtles are known to make the different shorelines of Davao Gulf as their nesting grounds.

The Hawksbill have been recorded to lay their eggs in white sand beaches like at AboitizPower's Cleanergy Park in Punta Dumalag, Davao City and Dahican beach in Davao Oriental.

"Davao Gulf is a very rich marine ecosystem. That is why hindi lang naman pawikan ang makita natin, kundi, (You can not only find sea turtles here, but) you can also find some dugongs, dolphins," Arguillas said.

Turtles and the environment

Arguillas said sea turtles help maintain healthy seagrass beds in the Davao Gulf or any habitat they are present at.

The Oceana report states when sea turtles graze, they help "increase the productivity and nutrient content of seagrass blades."

"Sea turtles forage on seagrass just a few centimeters from the bottom of the blades, allowing older, upper portions of the blades to float away. As the turtles crop and re-crop the same plot, seagrass blades are removed from the area rather than accumulating on the bottom. This results in a 15-fold decrease in the supply of nitrogen to seagrass roots, which impacts plant species, nutrient cycling, animal densities and predator-prey relations," the Oceana report reads.

Arguillas said sea turtles also keep the jellyfish population in check. The same Oceana report states how Leatherback sea turtles are able to consume 440 pounds of jellyfish in a day.

Hawksbill sea turtles, on the other hand, help landscape the coral reef as they eat on marine sponges.

"By doing this, they change the species composition and distribution of sponges in coral reef ecosystems. Sponges compete aggressively for space with reef-building corals. By removing sponges from reefs, hawksbills allow other species, such as coral, to colonize and grow," the Oceana report reads.

"Kung mawala siya, dako impact sa ecosystem (If the sea turtles are gone, it will have a big impact on the ecosystem)," Arguillas said.

For example, the Oceana report states that "older portions of seagrass beds tend to be overgrown with microorganisms, algae, invertebrates and fungi." While areas with more jellyfish are proving "detrimental to the recovery of fish stocks since jellyfish prey on fish eggs and larvae." Meanwhile, if sponges are not controlled, they could dominate the reef, "further limiting the growth of corals and modifying the very structure of coral reef ecosystems."

At present, the Hawksbill is classified under the IUCN Red List as critically endangered. The Green Sea Turtle is endangered while the Olive Ridley and Leatherback are vulnerable.

Arguillas said there are a lot of threats to sea turtles.

One of which is the loss of habitat due to developments.

Ruth U. Gamboa, professor at the Department of Biological Science and Environmental Studies, College of Science and Mathematics at the University of the Philippines-Mindanao, said the recent developments near Punta Dumalag may have affected the nesting grounds of the Hawksbill sea turtles.

She said the developments may have affected the current of the water resulting in the reduced beach line. This puts the nests in danger during the habagat when the tide is high and waves are strong.

Edillon shared how caretakers of the Clenergy Park had to move a nest during one habagat season as the high tide has begun to reach the nest. This area used to be safe from the high tide and waves.

Arguillas and Edillon shared how trash also poses a threat to the sea turtles.

Edillon recalled a time when they had to attend to a sea turtle at the Pawikan Rescue Center in the Cleanergy Park that was throwing up and pooping plastic wastes.

"Makita nato sa mga videos na makaon nila, ma-ingest nila, mugawas sa ilahang nostrils (We saw in videos that they have eaten plastics, ingested it, and some of the plastics are coming out of their noses)," Arguillas said.

Some sea turtles have mistaken plastics as jellyfish, which is common in their diet.

Edillon said at the Cleanergy Park, the caretakers could collect around three to four sacks of garbage in two hours every day. Being in between the mouth of Davao River and Talomo River, Punta Dumalag has become convergence point of trash being expelled by the river.

Edillon said to protect the sea turtles, there needs to be a collaboration among the people in the community.

One of the current efforts to conserve the sea turtles at the Davao Gulf is the Cleanergy Park. What used to be a grassland is now a thriving urban beach forest and a nesting ground of the Hawksbill Sea Turtle.

Founded in 2013 and launched in 2015, the Cleanergy Park is a collaborative project between Davao City local government, Barangay Matina Aplaya, DENR, BMB (formerly PAWB), researchers from UP and University of Southeastern Philippines, and Aboitiz Group.

It is a five-year development project with a total budget of P5 million funded by Aboitiz Foundation as part of Aboitiz Group’s sustainability program.

Gamboa said sea turtles would return to where they hatched to lay their eggs. Punta Dumlag could have been a nesting ground for generations of Hawksbill sea turtles.

No nests were found in 2016. However, Edillon said it is possible that there were nests but they were not able to discover it because the clues to the nest may have been erased by either the waves or the wind.

Edillon said the caretakers at the Cleanergy Park would regularly roam in the evening to check for sea turtle nests. Each female sea turtle could lay a clutch of egg three to five times in a span of two to three weeks.

Once they find nests, they will dig it to check if it is where the turtle laid its eggs or if it is a false nest.

On average, a clutch of eggs at the Cleanergy Park would average at 140 eggs. Though there was a time that it reached around 200 eggs.

Once the hatchlings are out, they are released within 24 hours. Sadly, though a lot will be released, only a few will reach adulthood and reproduce. Studies have shown that only one in 1,000 to one in 10,000 will survive.

"When you release, naay paspas, naay hinay. Those na mauna are those mga hatchling nga makaon. Pag-abot sa mga hinay, ok na sila (When you release them, some are fast while others are slow. Those who are fast may be eaten by predators first. While for the slow ones, it could be safer for them because some of the predators may be full already)," Edillon said.

Edillon recalls how some sea birds snatch hatchlings on their way to sea. They have also captured on video how a small octopus caught one of the hatchlings that were released. Some species of fishes are also known to eat hatchlings.

Three days after the release, Edillon said they would dig up the nests to check for sea turtles that may have been stuck and get DNA samples from some of the eggs.

To date, they have released a total of 5,145 hatchlings.

Aside from serving as a nesting ground, the Cleanergy Park also houses the Pawikan Rescue Center. Many sea turtles have been brought here to recover.

At present, two turtles are being treated here -- Coaco and Dumalag.

Coaco was rescued on April 25, 2016. Edillon said the Hawksbill sea turtle was in captivity for 15 years. It was rescued by DENR-Davao after it received reports of a turtle being kept at a beach resort. It was turned over to Cleanergy Park on April 26, 2016.

Dumalag is a female Hawksbill sea turtle that was rescued on May 20, 2020, and turned over by the Davao City Police Office to the Cleanergy Park on the same day. The sea turtle was discovered by fishermen in their net with two spears, three feet long each. Dumalag is currently recovering but the spears may have affected her buoyancy.

Meanwhile, Arguillas said the Cleanergy Park plays a vital role in the conservation efforts for the sea turtles. Likewise, she said the community plays a crucial role too.

"Kami sa government (We at the government), we are doing our best to intensify public awareness," she said.

Arguillas reminds the public that if they see a sea turtle at shore, they should avoid approaching or touching it. Instead, they must report it to the barangay or DENR.

Arguillas said if the turtles start laying, they urge the community to protect them from dogs and humans who may dig up the eggs and eat them.

"Report immediately sa DENR kay para mahibaw-an namo pila na ka days before mag hatch (Report it to us at DENR for us to know the estimated time it will hatch)," she said.

If it is trapped in the fishermen's net and is uninjured, people are urged to release it immediately to sea.

Lastly, the public is urged to stop throwing garbage into the sea.

In his own opinion, Edillon said while it is good there are laws on waste management, it is still the humans who are the culprit to the threats on sea turtles and the environment.

"Dili gyud ang plastic ang culprit, tao man gyud ang culprit. Kasi tao man ang mag decide kung asa niya ilabay ang basuro or dili or asang lugara (It is not really the plastic that is the culprit, it is the person. The person decides whether he or she will throw the garbage and where it will be thrown)," Edillon said.

People are urged to throw their garbage responsibly and not throw it into the sea.