Vast Antarctic iceberg could drift through ocean for years 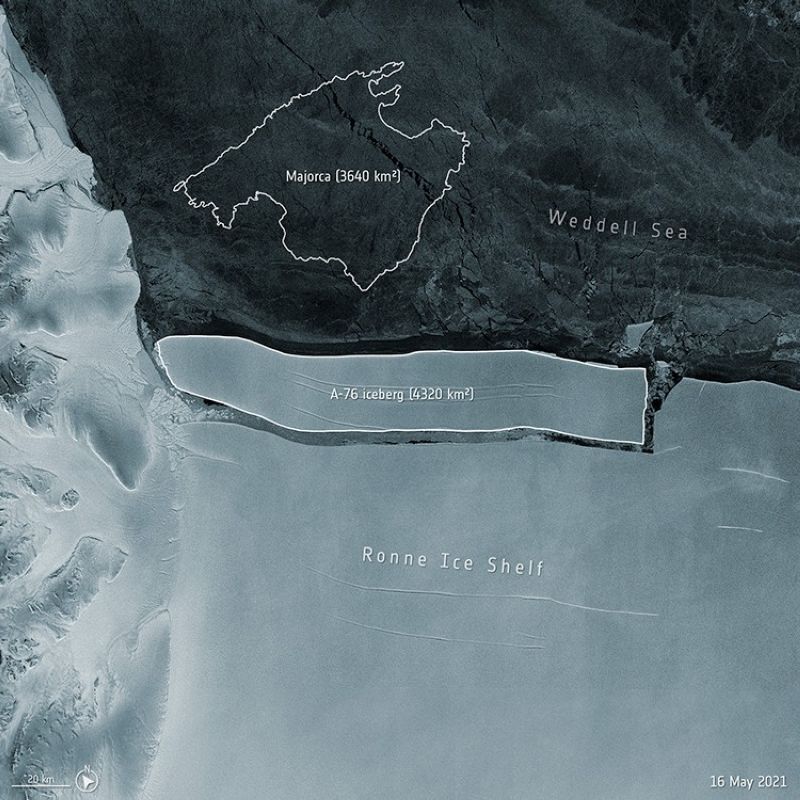 ANTARCTICA. This handout image provided by the European Space Agency (ESA) shows a representation of the size of an iceberg which has calved from the western side of the Ronne Ice Shelf, lying in the Weddell Sea, in Antarctica. A vast iceberg that broke off from Antarctic earlier this month could drift through the ocean for years before it breaks up and melts away, a scientist from the ESA said Friday, May 21, 2021. (AP)

PARIS -- A vast iceberg that broke off Antarctica earlier this month could drift through the ocean for several years before it breaks up and melts away, a scientist from the European Space Agency said Friday.

The iceberg, dubbed A-76, is more than 40 times the size of Paris, or about 73 times as big as Manhattan, making it the largest currently afloat.

It was first spotted by scientists at the British Antarctic Survey and confirmed by the US National Ice Center using images taken by the European Space Agency's Sentinel 1A satellite.

Mark Drinkwater, a senior scientist at the space agency, said that while icebergs regularly calve from Antarctic ice shelfs, the region where A-76 broke off had seen relatively little change in recent decades.

“It’s become a poster child, obviously, and there’ll be a lot of attention on it," he said of the 4,320 square-kilometer (1,668-square-mile) floating island of ice.

A-76 will eventually escape from the Weddel Sea around Antarctica and drift into the South Atlantic, but that journey could take years, Drinkwater said.

“We’ve seen icebergs that can last up to 18 years that have been tracked around Antarctica if they remain in relatively cold waters,” he said. “But it’s likely that once this thing gets ejected from the Weddel Sea out into the South Atlantic, it’ll disintegrate fairly quickly.”

The even larger iceberg A-68 that calved from Antarctica’s Larsen C ice shelf in 2017 disappeared by early this year.

Drinkwater said satellites have helped scientists keep track of the changes happening on the vast but largely uninhabited continent that would otherwise go unnoticed.

“The continent that everybody thinks of as a benign, frozen part of the world that never changes is actually very dynamic,” he said, adding that increasing calving activity in parts of Antarctica monitored from space over the past 30 years can be attributed to climate change.

Antarctic ice shelves regularly lose large chunks to the sea even as fresh ice forms inland, a process that Drinkwater compared to a bank account that's continually being paid into and withdrawn from.

“Parts of Antarctica are in arrears, and that’s largely a consequence of increase in temperature or large calving events that have removed ice and destabilized the ice shelves themselves,” he said. “Climate is responsible for these changes. And over the longer term, of course, it will have wide-ranging impacts in different locations around Antarctica.” (AP)