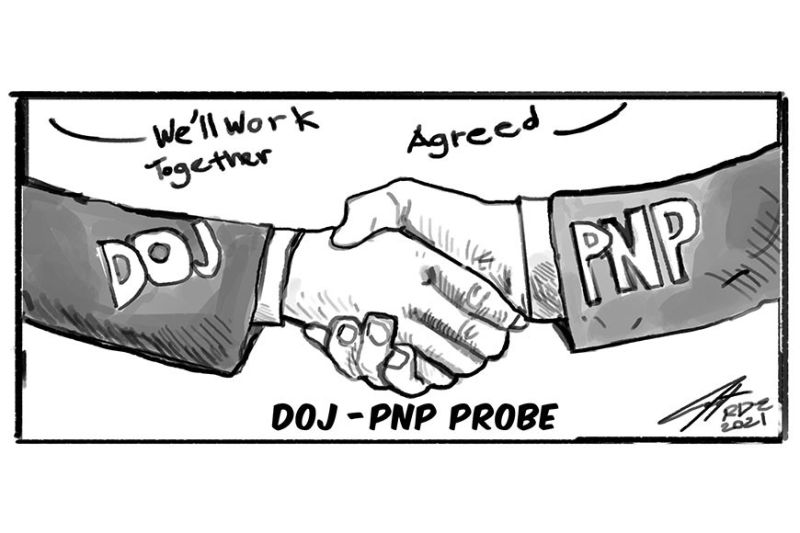 The Department of Justice (DOJ) and the Philippine National Police (PNP) agreed to work together in looking into alleged extrajudicial killings in the government’s war on drugs. The PNP will open its books on illegal drug apprehensions to the DOJ. Culling over 328 cases that “were made available for review,” around 61 internal investigation cases “where clear liability was established” will be investigated by the DOJ. These were the ones that “stood out,” DOJ Secretary Menardo Guevarra said.

But critics of the government’s drug war welcome the DOJ-PNP probe with understandable skepticism. With over 7,000 drug war deaths officially recognized by the PNP, 61 cases barely represent one percent.

This update pops out some three months after Guevarra’s damning report to the United Nations Human Rights Council (UN HRC) that more than half of the reviewed 5,655 “nanlaban” cases that resulted to deaths indicated police action that did not follow protocols.

PNP Chief Guillermo Eleazar, on the other hand, assured that the PNP intends to open more records in the course of the DOJ inquiry.

“I assure the good justice secretary that the PNP has no tolerance for rogues, including those who may not have committed unjustified killings in the course of anti-illegal drug operations, and that we are serious in cleansing our ranks,” Eleazar said.

Meantime, Human Rights Watch Deputy Director for Asia Phil Robertson said, “This whole statement is like a magician’s trick—with the big reveal that the police didn’t faithfully investigate or follow procedures to excite the international community audience, but then nothing further.”

It appears that the DOJ is throwing the PNP “under the bus,” but the DOJ-led review excludes the independent Commission on Human Rights (CHR), said Robertson. The move also comes at a time when pressure from international rights groups and the International Criminal Court mounts, calling out the government on the matter of extrajudicial killings and persistent impunity in the war against drugs.

Due credit, however, to the newly installed PNP Chief Eleazar, who incidentally retires in the last quarter of 2021, for this openness, a bit of fresh air from the rather clamlike style of his predecessor. He understands that the skepticism towards this recent multi-agency initative to investigate the alleged extrajudicial killings comes from a long-standing animosity toward the police. Working on trust, Eleazar said, is part of his roadmap.

Guevarra, on the other hand, says the joint probe can be credited to “political will—the will to do what is right.”

Rights groups alleged that of the estimated 25,000 who were killed in the drug war, only one case led to a conviction—that which found three cops guilty in the killing of 17-year-old Kian delos Santos in 2017.

National Union of People’s Lawyers president Edre Olalia said the move is only meant to “deflect and dissipate valid criticisms over lack of immediate, fair and comprehensive accountability.” The public simply cannot just be sold out by this token move.

But then again, hope against hope, we’ll take what sliver of chance we get to call for accountability. If critics have been barking against impunity, the DOJ-PNP’s work on this may just be something worth the close look.