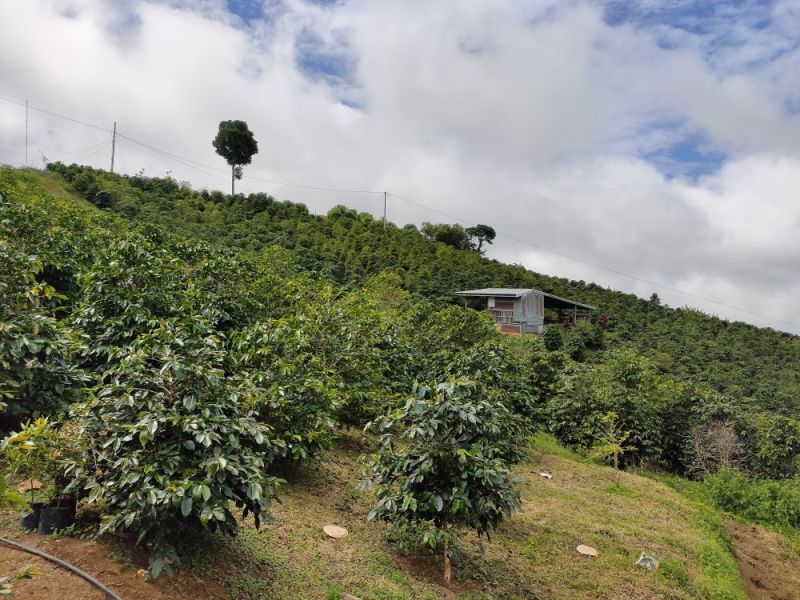 BALUTAKAY. Five farmers from the Balutakay Coffee Farmers Cooperative in Bansalan, Davao del Sur were among the winners in the Arabica Category of the Philippine Coffee Quality Competition. A total of 31 Arabica entries were submitted in the competition and 12 were cupped in the finals. (Photo by RJ Lumawag)

FIVE coffee farmers from the Balutakay Coffee Farmers Cooperative (Bacofa) in Balutakay, Bansalan, Davao del Sur were among the winners in the Arabica Category of the Philippine Coffee Quality Competition (PCQC).

During the virtual awarding on May 26, 2021, Marites Arellano's natural processed coffee beans, which are of the catimor varietal, scored an average score of 85.86, placing first in the Arabica category. The coffee has notes of peach, guava, chocolate, apricot, and almond.

"This is a very gentle coffee and is quite a fruit bomb. Moving away from the typical spice notes and typical nutty and tobacco notes from a Philippine coffee. Quite an outlier," said Shaun Ong, International and Head Judge of PCQC 2021.

Ong, who is the head trainer at Bettr Coffee Academy in Singapore, described Arellano's coffee as "phenomenal."

"For where the coffee bean came from, a catimor, this speaks a lot to the efforts that you have put in in your processing," Ong said.

Arellano attributes her feat to openness to new technologies in coffee farming, harvesting, and processing.

“If you see coffee farming as a business, there should always be that eagerness to learn and expose yourself to various technologies from the experts,” she said.

Arellano is just one of the many coffee farmers who sought the assistance of various agencies to improve their coffee production. The Department of Agriculture in Davao Region (DA-Davao) is one of the agencies that provided substantial assistance through the High Value Crops Development Program's (HVCDP) Coffee Rejuvenation Project. The project has provided a package of assistance which includes close release fertilizer, pruning shears and pruning saw for its coffee rejuvenation program and post-harvest and processing facilities such as tramline system, dryers, a roasting facility, hauling truck, and mini-storage.

Placing second are natural-processed coffee beans of Lendilou Loon. Her beans scored an average of 85.07. It had notes of orange, caramel, pecan, sugar cane, dark chocolate, and peanuts.

"Very sweet. In this case, nutty and chocolatey. Moving away from the usual spicy notes that we have been getting," Ong said.

"The top three arabica are easily some of the best Arabicas I have tasted from the Philippines," Ong said.

On the fourth spot is the honey processed coffee beans of Marifel dela Cerna. Her coffee beans scored an average of 84.64 and had notes of dark chocolate, orange peel, cacao nibs, and capsicum.

Placing sixth are the honey processed beans coming from Maria Luz Dubria that scored an average of 83.07. It had notes of caramel, orange peel, cinnamon, almond, black tea, and lemon.

His coffee beans had an average score of 84.36 with notes of roasted peanuts, lemon, orange, tangerine, and pomelo.

The PCQC is a coffee competition of Philippine origin submitted by farmers and entities engaged in coffee farming.

It seeks to increase the consciousness of Filipino farmers on coffee quality and enhance their competitiveness in the domestic and international markets.

Based on PCQC standards, coffee beans must have at least a grade of 80 percent to be considered a specialty coffee.

The closer to 100 a coffee sample gets, the more likely it will command a higher price and increased demand from specialty rosters.

Cherry Cruz, chief executive officer of the Barista and Coffee Academy of Asia and PCQC TWG chairperson, said a total of 103 entries were submitted in this year's PCQC. This was an increase from the 72 entries in 2020.

She said the coffee beans from Visayas and Luzon were assessed and graded in Metro Manila. A total of 55 entries were graded from the two island groups and included 12 Arabica, 42 Robusta, and one Excelsa.

A total of 48 entries from Mindanao, which included 19 Arabica entries, 27 Robusta, and two Excelsa, were assessed and graded in Mindanao.

"In the PCQC, we put value and emphasis on the importance of quality coffee relative to consumer safety, market trust, value-adding, and ultimately, sustained livelihood of our stakeholders. It plays a very important role in achieving the goals and objectives of the Philippine Coffee Industry Roadmap," Myrna Pablo, National Coffee Cluster coordinator and Department of Trade and Industry-Cordillera Administrative Region director, said. (RJL with DA-Davao)