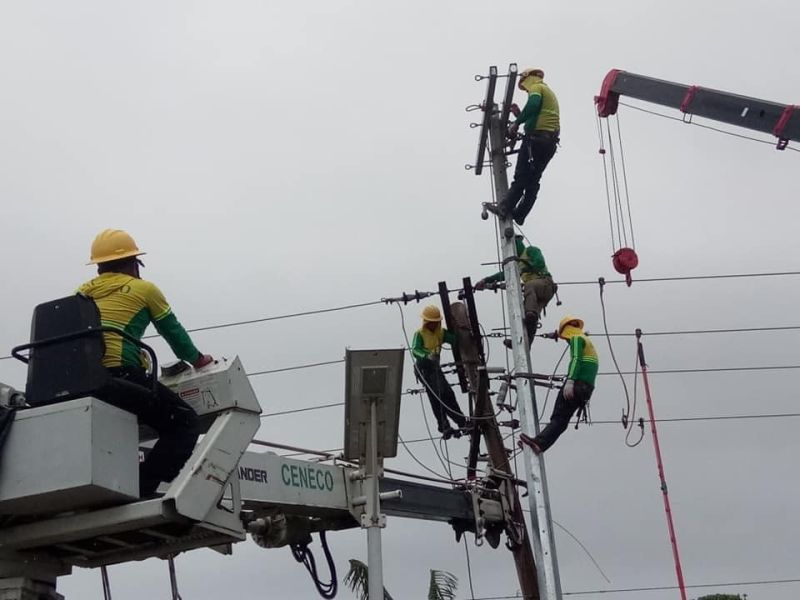 NEGROS. The Central Negros Electric Cooperative will continue to source power supply from Kepco Salcon Power Corp. at a reduced capacity of 20 megawatts and only for one year. (Contributed photo)

THE Central Negros Electric Cooperative (Ceneco), catering to the largest number of electric consumers in the province, has extended for one year its power supply agreement with Kepco Salcon Power Corp. (KSPC) only for a base load of 20 megawatts (MW), its official said.

Lawyer Dan Pondevilla, acting general manager and project supervisor of Ceneco, on Wednesday, May 26, 2021, said the power distribution utility accepted the earlier offer of KSPC for a one-year extension of their power contract ending this month.

Pondevilla, however, said the extension should be at a reduced capacity of 20 MW or half of the 40 MW that was previously contracted by Ceneco with the KSPC.

“This is the most practical and beneficial on the part of the consumers. Contracting just 20 MW, and not 40 MW, will enable us to maximize our supply and reduce our power rates,” he said, reiterating that based on the utility’s power supply plan “what we need is just 20 MW.”

It can be recalled that on May 7, 2021, KSPC president and chief executive officer Jong Ryoon Yoon wrote Ceneco that their "cooperation period" with the latter is set to expire on May 30, 2021.

The date is 10 years from the commercial operation date on May 31, 2011, he told Pondevilla, Ceneco president Dwight Carbon, and Corporate Planning Head Engineer Norman Pollentes.

The letter stated that "in reference to our power sales contract dated May 17, 2009, as amended, Article 16.1 of the PSC, provides that the contract shall terminate on the scheduled termination date unless otherwise renewed by mutual agreement of the parties in writing."

Yoon recalled that KSPC emerged as the "lowest calculated and responsive bidder" in the recently held bid opening for the 20 MW power requirement for 10 years of Ceneco.

He said currently, the Third Party Bids and Awards Committee has yet to conclude the post-qualification proceedings.

The power delivery schedule set for May 26, 2021 by the winning bidder would most likely be moved to a later and more practicable date considering the process between post-qualification until the implementation of the PSC, Yoon said.

He added that "in this light, KSPC would like to propose for the extension of our existing power sales contract for a period of not more than 12 months."

The KSPC official noted that the one-year extension will be under the same terms and conditions of their existing power sales contract.

"This will be beneficial to Ceneco and its member-consumers not only through stable and reliable power supply but to be freed from the risk of full Wholesale Electricity Spot Market (Wesm) exposure and volatility," he added.

Based on the records of Ceneco’s Corporate Planning Department, its 40-MW power supply contract with KSPC has already expired on Tuesday, May 25.

Pondevilla said during the last Board meeting on May 11, he was instructed to write a response to KSPC that Ceneco is willing for an extension of one year provided at a reduced capacity of 20 MW.

He said KSPC has already replied that it agreed with the extension.

“So, the Board discussed and passed a resolution on Tuesday approving the extension for 20 MW power supply contract with KSPC,” he said, adding that “it’s a go already though we have yet to reconcile our data whether the expiration is May 25 or 30.”

The Ceneco official also said there are no violations as far as the extension of the power contract with KSPC is concerned.

Pondevilla said it is allowed under the contract that was approved by the Energy Regulatory Commission (ERC).

“It is based on ERC guidelines like not more than one-year extension. It complies with the agreed terms and references,” he added.

Earlier this year, as Pondevilla sits as the new acting manager and project supervisor of Ceneco alongside his function as the general manager of the Northern Negros Electric Cooperative (Noneco), he made a commitment to reduce the cooperative’s power rate by at least P1 per kilowatt (kWh) starting June this year.

“I am keeping my promise, and it’s not meant to be broken,” Pondevilla said, adding that by cutting down the contract with KSPC, the cooperative is able to reduce its rates for member-consumers by June or July.

Ceneco caters to the Cities of Bacolod, Bago, Talisay and Silay, and towns of Murcia and Salvador Benedicto.

Its acting general manager had lamented that it is supposed to have the lowest power rate among all electric cooperatives in Negros Island because it is “very compact” as most of its consumers are commercial and industrial.

He said some contestable customers directly contract with power generators so they are no longer part of Ceneco’s requirement.

“We are optimistic to attain the estimated rate reduction of P1 per kWh especially when the price at the market goes down,” Pondevilla added.

Aside from the expired 40-MW supply agreement with KSPC, Ceneco also has an existing contract of 24 MW with the Cebu-based coal-fired power plant which will expire in 2022.

Other power supply agreements of Ceneco include 20 MW from Green Core Geothermal Inc. in Negros Oriental until 2025, and 35 MW from Palm Concepcion Power Corp. in Iloilo also expiring in 2025.

Amid the one-year extension at a reduced capacity of 20 MW with KSPC, the management assured that there will be no deficiency in the supply that may result in power outages.

Pondevilla explained that whatever deficiencies in the existing power contracts of Ceneco, they can source it from Wesm in such a way that the exposure is less.

Pondevilla said they recognized that the market price is volatile as it depends on the movement of supply and demand.

"We will source from the market but our exposure is not that huge,” he said, adding that “power interruptions are mainly caused by bad weather conditions resulting to problems in our lines and not because there is a shortage in supply.”

Consumer group Power Watch Negros Advocates earlier manifested its opposition against the proposal for extension of the power sales contract between Ceneco and KSPC, saying it constitutes overcontracting.

“We made a promise to the member-consumers that there will be no overcontracting under our management,” he said, reiterating that “this is the reason why we extended our contract at a reduced capacity.”