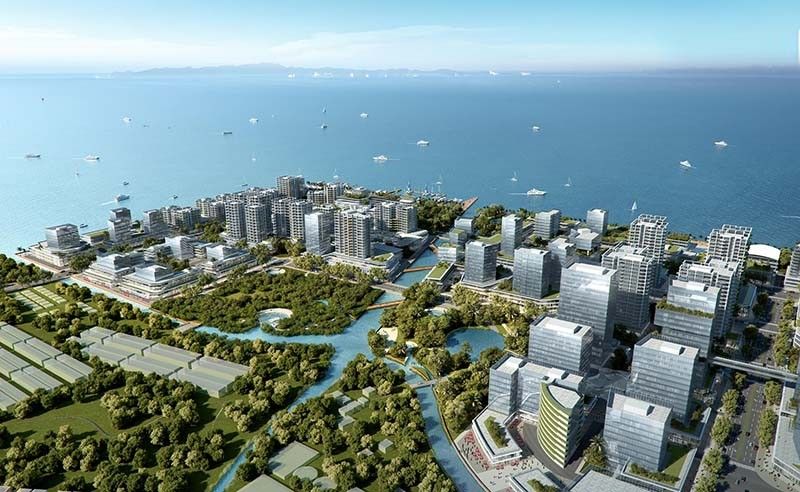 AWAITING APPROVAL. Once it gets the green light from the Philippine Reclamation Authority, Cebu Landmasters Inc. will begin the development of the 100 hectare Ming-Mori Reclamation Project in Minglanilla Cebu that will house a techno park, commercial, residential and post facilities. Here is an updated render of the Ming-Mori project by globally acclaimed masterplanner Surbana Jurong./ Photo courtesy by CLI

PROPERTY developer Cebu Landmasters Inc. (CLI) is eyeing to start the construction of the 100-hectare Ming-Mori Minglanilla Reclamation Project in the fourth quarter this year as soon as it gets the approval to proceed from the Philippine Reclamation Authority (PRA).

CLI chairman, president and chief executive officer Jose Soberano III said Thursday, May 27, 2021 that CLI is scheduled to sign an agreement with the PRA on June 11, 2021.

“Once signed, the PRA will issue to proceed (with the construction),” he said, during the media briefing following CLI’s virtual 2020 Annual Stockholders’ Meeting.

The signing of the agreement was supposed to happen in April but it was delayed due to the recent pandemic lockdown in Manila.

Ming-Mori Minglanilla Reclamation Project is a joint venture between the local government of Minglanilla and private consortium partner Ming-Mori Development Corp. (MMDC), an affiliate of CLI. MMDC envisions this project as a world-class estate that will generate over 75,000 jobs in the municipality.

MMDC, according to Soberano, is composed of six incorporators of which CLI is the project lead that holds a 51 percent stake.

The reclamation project is a P10 billion project that will house Ming-Mori Techno Business Park, a mixed-use development that will have light industrial facilities and a township with residential and commercial areas and port facilities.

“We are all excited for this project,” said Soberano, noting that Ming-Mori Techno Business Park is poised to become an alternative location for companies that want to locate in Cebu. “This will create a greater scale in terms of economic activity.”

Besides the reclamation project, Soberano disclosed that CLI will launch the redevelopment of Abaca Resort in Mactan Island and a condo project in Lowaii Cebu Marine Beach Resort in the third quarter this year.

“These are just some of the three things we are working on this year for Cebu,” said Soberano, adding that they will also disclose a few acquisitions once finalized this year.

CLI said it aims to buck industry trends once again this year with 25 projects in the pipeline–15 of which target the economic and mid-market residential segments in the region and are collectively valued at P19 billion.

The company is earmarking P12 billion for its capital expenditure this year.

“Our 2021 projects will expand our VisMin footprint to areas like Ormoc, Bohol, Bacolod, Dumaguete, Iloilo and other key cities in the region while further strengthening our market share in Cebu and Cagayan de Oro where we have established a strong presence,” said Soberano.

“This was due to strong sales take-up of its residential projects and unhampered construction activity bolstered by CLI’s financial assistance totaling P12.5 million to its 5,000 third-party construction workers in 2020,” CLI said in a statement. (KOC)
< Previous PageNext Page >