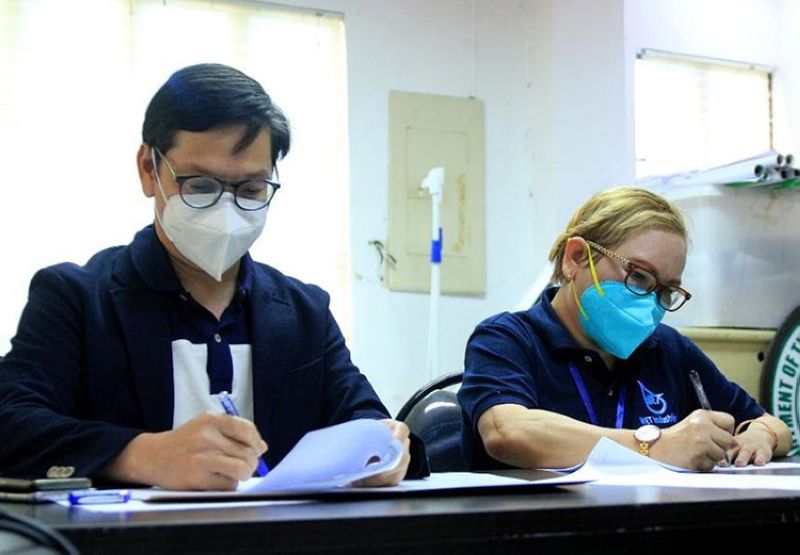 ZAMBOANGA. The Ministry of the Interior and Local Government in the Bangsamoro Autonomous Region in Muslim Mindanao (MILG-Barmm) allots more than P143 million to install 10 units of desalination machines in the island provinces of Sulu and Tawi-Tawi to address scarcity of potable water. A photo handout shows Lawyer Naguib Sinarimbo, MILG minister (left), and Donna Paiso, WET Industries Inc. representative, sign a contract agreement Thursday, May 27, for the implementation of the project. (SunStar Zamboanga)

THE Ministry of the Interior and Local Government in the Bangsamoro Autonomous Region in Muslim Mindanao (MILG-Barmm) has allotted more than P143 million to install 10 units of desalination machines in Sulu and Tawi-Tawi that will convert sea water into fresh potable water.

Sinarimbo signed a contract agreement on Thursday, May 27, with Water Equipment Technologies (WET) Industries Inc. for the provision, installation, and delivery of five desalination machines for Tawi-Tawi, and another five for Sulu, specifically in the island municipalities of Pangutaran, Pata, Hadji Panglima Tahil, and Pandami.

The funding to purchase the desalination machines will come from the 2020 contingency fund of the Office of the Chief Minister, and implemented by MILG under its Project Management Development Division.

Sinarimbo said that during his trip to the island provinces, he observed the challenges being faced by the residents -- the need to travel by boat from one island to another for four to five hours just to have access to safe potable water.

Sinarimbo said digging for wells was not an option, as it would not yield potable water since they are surrounded by the sea, and drinking water with high salt content poses serious health problems.

"We've been battling this problem for probably as old as time, and I am perplexed by the fact that no serious attempt has been made to resolve this issue," he said.

"During that trip, I made a promise to some of the officials there that we will try to resolve the challenge that has been there for generations, and this government will resolve that in earnest," he added.

He said the issue on potable water in Sulu was also raised during the Mushawara consultation with Civil Society Organizations held in January and Chief Minister Ahod Ebrahim vowed that a desalination project would be implemented.

Donna Paiso, WET Industries Inc. representative, said that despite the materials coming from abroad, she assured that they will do their best to deliver the machines on time.

Founded in 1975, WET is a water treatment expert based in Dallas, Texas.

Sinarimbo said the project is the "first bold step" of the regional government in addressing the lack of potable water in the island provinces.

He said desalination facilities will be also deployed to Basilan province. (SunStar Zamboanga)