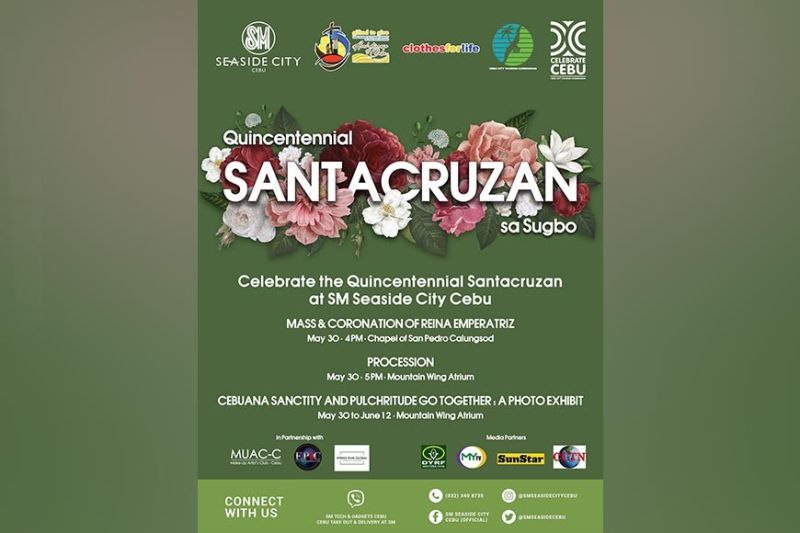 SM SEASIDE City Cebu and the Archdiocese of Cebu, as part of its 500 Years of Christianity celebration, will hold a mass and Santacruzan to close the Marian month of May. The mass and Quincentennial Santacruzan will be on Sunday, May 30, 2021 at the Chapel of San Pedro Calungsod in the South Road Properties at 4 p.m., and SM Seaside City Cebu, 5 p.m., respectively.

The mass will be presided by Cebu Archbishop Jose S. Palma.

After the mass, a procession will be conducted from the Chapel to the nearby SM Seaside mall for the Santacruzan.

The Santacruzan is a Filipino tradition that highlights the finding of the True Cross by Queen Helena, mother of the Emperor Constantine, and caps another beloved Filipino tradition, the Flores de Mayo. These traditions are also showcased in the 500 years of Christianity celebration as fruits of the faith as well as means to share the faith.

The sagalas of the Flores de Mayo and Santacruzan include representatives from parishes and beauty queens, such as Ms. Universe Philippines 2019 Gazini Ganados, Miss Earth 2008 Karla Henry, Miss Cebu 2009 Kris Tiffany Janson and Binibining Cebu 2018 Steffi Aberasturi; important personalities in the local government units, public and private agencies and other institutions, such as lawyer Jocelyn Pesquera and Cindi Chan, First Lady of Lapu-Lapu City, who is the Reina Elena and Emperatriz of this year’s Quincentennial Santacruzan.

A photo exhibit featuring the sagalas will also be opened after the activity, with photos by the Event Photographers Cebu from locations set at 13 old churches of Cebu with Holy Doors titled “Cebuana Sanctity and Pulchritude Go Together” and will be on display until June 12 at the Mountain Wing Atrium. (PR)