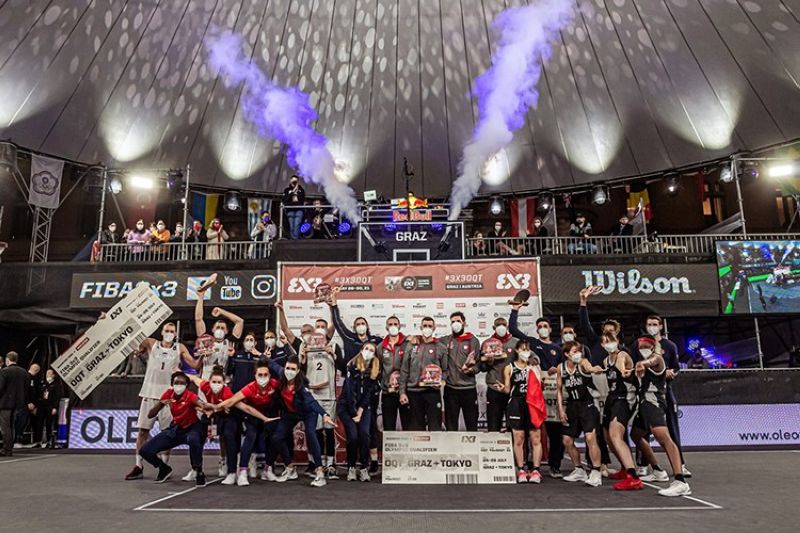 The six teams from both men and women’s fields celebrate after they earned a berth to the 3x3 basketball event in the Tokyo Olympics. (FIBA)

Six teams have earned slots to the 3x3 basketball event in the upcoming Tokyo Olympics after they shone in the FIBA 3x3 Olympic Qualifying Tournament in Graz, Austria.

In the women's category, France made the cut after a thrilling 15-14 win against Japan, which ended with Marie-Eve Paget sinking a tough layup with just eight seconds to go in the game. The United States then followed after an unbeaten 6-0 run in Graz and a last 21-13 against Spain.

Japan earned the last ticket to Tokyo available at the event with a heart-pounding overtime victory versus Spain. The tournament MVP Stephanie Mawuli drove to the basket for the game-winner, which sent the Asian team to the Olympics.

France, USA and Japan join China, the Russian Olympic Committee, Romania and Mongolia, who had already qualified for the Olympics based off the FIBA 3x3 Federation Ranking on November 1, 2019.

In the men's class, Poland was first to get their Olympic ticket after giving Latvia their first loss in Graz in the semi-finals, 20-18. The Netherlands joined them not long after after a win over France. Latvia captured the last Olympic spot available at the tournament after defeating France in the last game of the tournament, 21-15.

The number one 3x3 player in the world Nauris Miezis was named MVP and was joined on the Team of the Tournament by Poland's Michael Hicks and Dutch star Arvin Slagter.

Poland, the Netherlands and Latvia join Serbia, the Russian Olympic Committee, China and Japan, who had already secured their spot based on the FIBA 3x3 Federation Ranking on November 1, 2019.

The last spot in both categories will be decided at the FIBA 3x3 Universality Olympic Qualifying Tournament in Debrecen, Hungary, on June 4-6. (JNP)