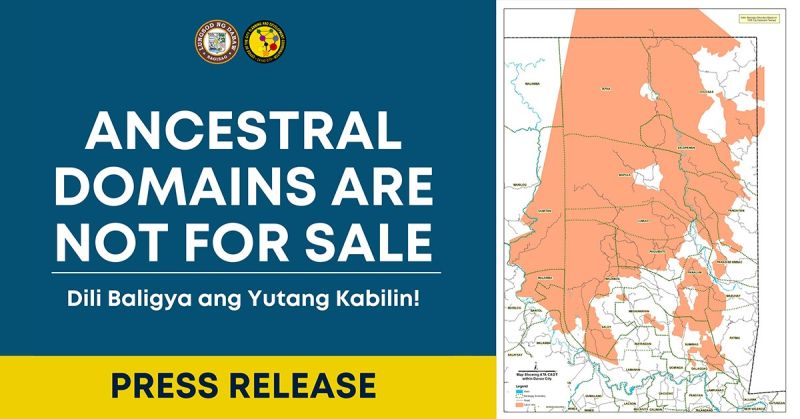 INDIGENOUS peoples (IP) leaders sought the support of the Davao City Government in promoting their call that the ancestral domains are not for sale by posting it on billboards.

In a press release on Tuesday, June 1, the City Planning and Development Office (CPDO) released a statement in support of the Ata Tribe in their call that the ancestral domains are not for sale.

CPDO said this call was reiterated by members of the Indigenous Political Structure of the Ata tribe of Paquibato District on May 15.

Members of the Indigenous Political Structure issued Resolution 10 series of 2021, reaffirming their commitment to protecting their ancestral domain from abuse due to rampant illegal sales of their lands and intrusive developments introduced to various areas.

During the gathering, IP leaders have collectively agreed to seek the support of Davao City Mayor Sara Duterte-Carpio in amplifying their efforts to promote awareness and recognition of, and respect for, their ancestral domain as enshrined in Republic Act (RA) 8371, otherwise known as the Indigenous Peoples Rights Act (IPRA) Law.

"Concretely, the IP leaders sought assistance in setting up billboards and signage in all the barangays of Paquibato District bearing the messages ‘Ancestral Domains are NOT FOR SALE’ and ‘Penalty of IMPRISONMENT for the Seller and Buyer,’ through Resolution 010 Series of 2021 signed by the nine members present in the meeting," CPDO said in a press release.

According to the City Planning, the entire Ata tribe’s ancestral domain sprawls over an area of 65,796.87 hectares of land, with 56,506.03 hectares situated within the boundaries of Davao City.

"The Ata tribe leaders are hoping that by protecting their ancestral domain, they will be able to preserve and enrich their indigenous culture and practices and also enhance their way of life with the support of local and national government agencies," CPDO said.

SunStar Davao has sought comments from the National Commission on Indigenous Peoples (NCIP), but it has yet to respond as of Tuesday afternoon, June 1.

According to RA 8371, "The indigenous concept of ownership generally holds that ancestral domains are the ICC's/IP's [Indigenous Cultural Communities/Indigenous Peoples] private but community property which belongs to all generations and therefore cannot be sold, disposed or destroyed."