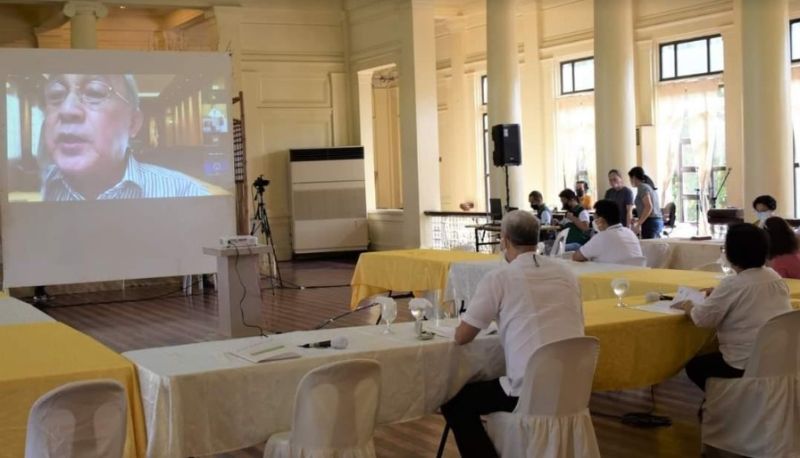 BACOLOD. Business leader Frank Carbon (on screen) raises the creation of Task Force Ceneco to Governor Eugenio Jose Lacson and other members of the Provincial Development Council during their quarterly meeting at the Provincial Capitol's Social Hall in Bacolod City on May 31, 2021. (Capitol Photo)

This was confirmed to SunStar Bacolod by Metro Bacolod Chamber of Commerce and Industry (MBCCI) Chief Executive Officer Frank Carbon, who met with Lacson and former governor and now provincial consultant on energy and development concerns Rafael Coscolluela during the Quarterly Provincial Development Council (PDC) Meeting held at the Provincial Capitol's Social Hall in Bacolod City on Monday, May 31.

Carbon, also the vice president of the Philippine Chamber of Commerce and Industry (PCCI) for the Visayas, said the governor approved the business sector's request for the creation of the task force as they underscored the "very damaging" impact of expensive power cost.

"Overpriced power supply contract will affect households mainly by taking food on the table," he said, adding that it will also prevent businesses to open up and hire more especially during this coronavirus disease (Covid-19) pandemic.

In fact, the group has already brought the issue up to the Department of Energy (DOE).

In a letter to Energy Secretary Eduardo Cusi dated May 29, 2021, a copy of which was obtained by SunStar Bacolod, Power Watch Negros Advocates secretary general Wennie Sancho asked the DOE top official to look into the matter, which would have an adverse economic impact on the consumers.

Sancho told Cusi that the decision of the Ceneco Board of Directors on the "short-term extension" was made notwithstanding the fact that in the meeting last April 12 of the Competitive Selection Process (CSP) on the procurement of 20 MW base load supply requirement for 2021 to 2031, there was already a lowest calculated bid of P3.2929 per kilowatt hour (kWh) from KSPC.

The group is also keen on bringing the issue up to the National Government, particularly at the House of Representatives.

Sancho said they are tapping the help of Negrense congressmen, mainly Negros Occidental Third District Representative Francisco Benitez, to push for a congressional inquiry regarding the alleged overpriced power deal between Ceneco and KSPC.

"We are now talking of the price of electricity in general which will affect all sectors -- business and consumers -- and so it is just proper that our legislators should know what is going on," he earlier said.

Its acting general manager and project supervisor, laywer Dan Pondevilla, welcomed the move of consumer group, saying he sees no problem with the consumer group pushing for a congressional inquiry as well as raising the matter to the DOE.

On May 26, Pondevilla confirmed that the power distribution utility accepted the earlier offer of KSPC for a one year extension of their power contract.

As this developed, Carbon said the governor recognized the need to look at this power overpricing concern at Ceneco, which also caters to areas under the jurisdiction of the Provincial Government.

Lacson told Carbon, who represented the business sector at the PDC, that he will issue the EO creating the task force so that the Provincial Government can call for a coordination meeting with the Ceneco Board, management and Third Party Bids and Awards Committee, among other groups.

"The task force will mainly help Ceneco to explore avenue where we can reduce power cost which will most likely result to lower electricity bills among consumers," he said, adding that the price difference between the contracted cost and lowest calculated bid, which is close to 100 percent, could have been a huge savings on the part of households and businesses.

The business leader stressed that there is a need not to overburden the households and businessmen given the current economic situation.

Carbon said that aside from enabling households to put more food to the table and businesses to have additional capital and create more employment, reducing the power cost will also result to more money in circulation.

"More savings from electricity [bills] could go to non-food purchases thus, non-food businesses may also benefit," he said, clarifying that leaving the investigation on the overpricing allegations to the DOE and ERC, the task force will concentrate on opening up the avenue for talking so similar woe in the power utility can be prevented in the future.

The business sector is upbeat that the cost of the extended power contract can still be lowered down.

"You'll never know if we will not start exploring," Carbon said, adding that they will push for talks with Ceneco, KSPC or any other parties to just conclude the bidding that as already conducted.

The task force may also raise the possibility of shortening the contract, maybe month to month basis, while other avenues are still being explored.

"Meaning, let us open the door for negotiation or talking as we might find a cheaper power price," he said.

Carbon stressed that the problem now is no longer health, but also economy.

There was no timeline yet as to the issuance of the EO. Also, the Provincial Government has yet to come up with the composition of the task force.

But, it will likely include the business sector as proponent, Carbon said.

Also, as they consider the creation of Task Force Ceneco as a welcome development, the business sector believes that this will also enable the power distribution utility to fulfill its mandate of giving reliable power at a reasonable price.

Meanwhile, Power Watch Negros Advocates, in a statement Tuesday, June 1, said the letter of another consumer group, Konsyumer-Negros, does not serve as an "imprimatur" that would compel the Ceneco Board and management to push through with the short-term extension contract nor chose the P5.58 per kWh over the P3.29 per kWh, which is grossly “disadvantageous” to the consumers.

Its secretary general cited the May 31, 2021 statement of Ceneco president Jojit Yap that there was actually a protest from Konsyumer-Negros, particularly on the terms and reference of the power supply agreement which the cooperative was about to enter.

Yap earlier said that tough there was already bidding, the board acted to the concern of Konsyumer-Negros by forwarding it to the DOE, adding that although the agency has acknowledged the receipt of the concern, it has yet to answer on the matter.

The Ceneco president said they opted to push with the extended contract with KSPC because it will already expire pending the decision of the DOE on the query of Konsyumer-Negros.

For Sancho, the board should have scrutinized the letter of Konsyumer Negros if the allegations are valid enough to postpone the awarding of the bid to the lowest calculated bidder.

"Furthermore, before making a crucial decision the board failed to verify whether the complaining organization is registered with the Securities and Exchange Commission? Or are they included in the official roster of legitimate Ceneco consumers," he said.

The consumer group leader further asked that if the complaining party does not possess a legal personality, why does the board give special attention to their query at the expense of not acting on the issue of the lowest calculated bidder concluded by the Third Party Bids and Awards Committee on its April 12, 2021 meeting.

That was one month and 18 days before the expiration of the 40 MW contract with KSPC by the end of May 2021, he said.

"Moreover, it is not a sine qua non or an essential element to jump over the hoops of the competitive selection process. That letter was not an absolutely indispensable document that should carry the weight in the Board's decision-making process," he said, adding that "to some observers, it would appear to be a flimsy excuse for justification as a result of their indecision."