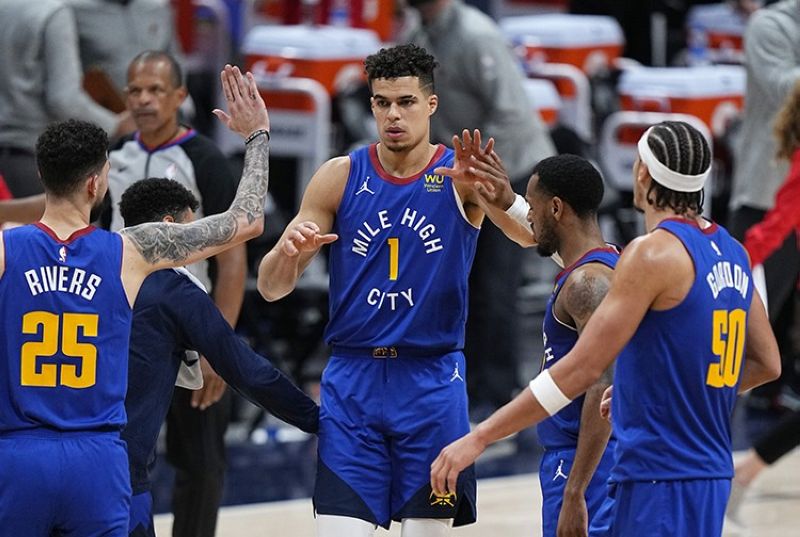 DENVER — On Damian Lillard's record-breaking night when he was hitting one shot after another from behind the arc and almost beyond belief, it was Michael Porter Jr. who quietly sank the biggest basket of all.

MPJ's 3-pointer from the left corner barely fluttered the net with 1:33 left in the second overtime and proved the game-winner as the Denver Nuggets squelched an epic comeback by the Portland Trail Blazers with a 147-140 win Tuesday night in Game 5 of their best-of-seven playoff series.

“That’s what playoff basketball is," Porter said after the thriller that included a dozen lead changes and 11 ties, including long 3s by Lillard that forced overtime and the second OT.

Lillard's night included a franchise playoff record 55 points and NBA playoff record 12 3-pointers. He eclipsed the mark of 11 set by Golden State’s Klay Thompson at Oklahoma City on May 28, 2016.

"At this point, all that matters is we can’t lose another game in the series,” Lillard shrugged.

And he, for one, isn't going to dwell on his big night and even bigger letdown.

“If I don’t put it behind me, and hold onto it, it’s going to get in the way of what we need to do in the next one," Lillard said.

And his teammates didn't score again, either.

Nikola Jokic, who scored 38 points and came one assist shy of a triple-double, tied it at 140 with a layup and Porter broke the tie with a 3 from the left corner with 1:33 left off a sweet pass from Jokic.

PHOENIX — The Phoenix Suns made LeBron James look away.

Riding an orange wave of support in the desert, the Suns sent the four-time league MVP to the locker room early and took control of their first-round playoff series with a 115-85 dismantling of the Los Angeles Lakers on Tuesday night.

The Suns lead 3-2, one win shy of becoming the first team in 15 tries to send James packing in the first round of the playoffs.

The Suns won in Los Angeles on Sunday to tie the series and went right at the Anthony Davis-less Lakers in front of a revved-up crowd in Game 5.

Davis was out after suffering a groin injury in Game 4 and the Suns took advantage by attacking every chance they had. The Lakers put up little resistance, allowing Phoenix to score nearly at will while building a 30-point halftime lead — Los Angeles' largest halftime deficit in 25 years.

Booker scored 30 points after two quiet games, the Suns made 14 3-pointers and had just four turnovers against the NBA's regular-season defensive efficiency leader.

The only bad news: point guard Chris Paul took a shot to his injured right shoulder in the third quarter and did not return.

NEW YORK — Kevin Durant, Kyrie Irving and James Harden had just eight games together in the regular season, few enough to wonder how good they could really be.

Five games against Boston provided some answers — and a chance to keep making up for all their lost time.

“We just don’t want to take any of this time for granted,” Irving said. “This doesn’t happen too often kind of in our culture, in our history, where three of the best scorers to ever play the game are on one team.”

Harden had 34 points, 10 rebounds and 10 assists for his first postseason triple-double with Brooklyn, leading the Nets into the Eastern Conference semifinals with a 123-109 victory over the Boston Celtics on Tuesday night in Game 5.

Irving scored 25 points and Durant had 24 for the Nets, who will face the Milwaukee Bucks in their first appearance in the second round since 2014. The No. 2-seeded Nets will host Game 1 against Giannis Antetokounmpo and the Bucks on Saturday.

“We've got our work cut out for us,” Durant said. “I mean, he’s a two-time MVP, Defensive Player of the Year for a reason, so we’re looking forward to the challenge.”

Despite their limited time together during the regular season, the Nets' three superstars showed how potent they can be in this series, particularly when they combined for 104 points in Game 4. (AP)
< Previous PageNext Page >