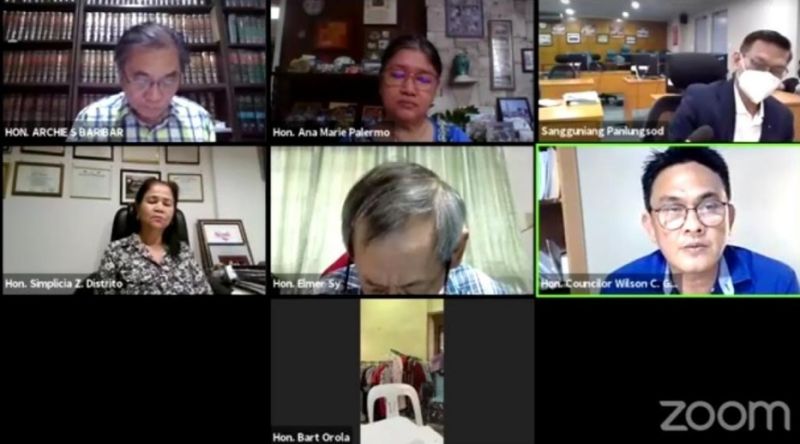 BACOLOD. Screenshot of the virtual session of the Sangguniang Panlungsod of Bacolod Wednesday where Councilor Wilson Gamboa Jr. proposed a resolution urging the Central Negros Electric Cooperative (Ceneco) to consider implementing immediately the result of the competitive selection process for its power supply contract with Kepco Salcon Power Corp.

Gamboa said the result of the bidding should be implemented immediately instead of extending the existing 40-megawatt (MW) power supply agreement at a reduced capacity of 20 MW with the Cebu-based coal-fired power plant.

The resolution stated that the Ceneco management has extended the power supply agreement at a reduced capacity of 20 MW from a 40-MW power contract at a rate of P5.42 per kilowatt-hour (kWh).

It said the rate of the recently conducted CSP was at P3.29 per kWh, adding that "a reduced capacity power supply contract extension is not an automatic renewal or extension of power supply agreement."

Gamboa, in the resolution, cited Section 23 of Republic Act 9136, otherwise known as the Electric Power Industry Reform Act of 2001 (Epira), and Section 4 (h), Rule 7 of the Implementing Rules and Regulation (IRR) of the Epira.

Under which, a distribution utility (DU) shall supply electricity in the least cost manner to its captive market within its franchise area subject to collection of retail rates duly approved by the Energy Regulatory Commission (ERC), he said.

On the basis of the resolution proposed by Gamboa, the City Council has set a public hearing on June 8.

Councilor Archie Baribar, chair of the committee on energy, said this will be a public hearing on whether the resolution be considered.

Baribar said the endpoint of the hearing is to see if are they going to follow or approve the resolution.

"We will discuss this resolution, ask everyone who has knowledge on this particularly on which is more favorable to the general public and should we see that it is good to have this resolution passed, we will pass it," he added.

The committee chair further said that if there is an issue to study the resolution more, they will study it.

Its acting general manager and project supervisor lawyer Dan Pondevilla earlier confirmed that the power distribution utility accepted the earlier offer of KSPC for a one-year extension of their power contract ending May 2021.

“This is the most practical and beneficial on the part of the consumers. Contracting just 20 MW, and not 40 MW, will enable us to maximize our supply and reduce our power rates,” he said, adding that "[there was] no overpricing primarily because all rates were approved by the ERC."

Backing this, Ceneco president Jojit Yap said there was no overpricing as the cost was still based on the existing contract with KSPC.

“Though there was already a bidding, the Board acted to the concern raised by Konsyumer-Negros by forwarding it to the Department of Energy (DOE),” she said, adding that though the agency has acknowledged the receipt of the concern, it has yet to answer on the matter.

“We cannot just rely on the Wholesale Electricity Spot Market (Wesm) as the cost of power there goes up and down,” Yap added.

Consumer group Power Watch Negros Advocates, however, believed that the extended power contract has an overprice of over P360 million.

In fact, the group has already brought the issue up to DOE.

In a letter to Energy Secretary Eduardo Cusi dated May 29, 2021, a copy of which was obtained by SunStar Bacolod, Power Watch Negros Advocates Secretary General Wennie Sancho asked the DOE top official to look into the matter that would have an adverse economic impact on the consumers.

Sancho told Cusi that the decision of the Ceneco Board of Directors on the “short-term extension” was made notwithstanding the fact that in the meeting last April 12 of the CSP on the procurement of 20 MW baseload supply requirement for 2021 to 2031, there was already a lowest calculated bid of P3.2929 kWh from KSPC.

“The Ceneco Board failed to act on this vital concern. Instead, they opted to close this short-term extension at the price of P5.42 to P5.58 per kWh,” he added.

The group is also keen on bringing the issue up to the national government, they plan to seek for inquiry at the House of Representatives.

As this developed, Negros Occidental Governor Eugenio Jose Lacson is set to issue an Executive Order (EO) creating the Task Force Ceneco that will work on exploring opportunities for coordination to address various issues hounding the local power industry like expensive electricity cost.

Lacson told Metro Bacolod Chamber of Commerce and Industry Chief Executive Officer Frank Carbon, who represented the business sector during the Quarterly Provincial Development Council Meeting on Monday that he will issue the EO creating the task force so that the provincial government can call for a coordination meeting with the Ceneco Board, management and Third Party Bids and Awards Committee, among other groups.

"The task force will mainly help Ceneco to explore avenues where we can reduce power cost which will most likely result to lower electricity bills among consumers," Carbon said.

The task force will concentrate on opening up the avenue for talking so similar woe in the power utility can be prevented in the future, the business leader added.