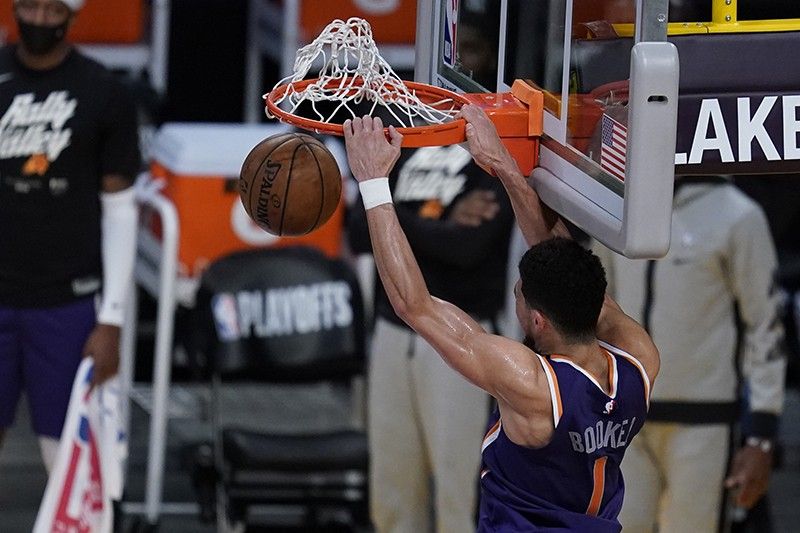 LOS ANGELES — Devin Booker scored 22 of his 47 points in a phenomenal first quarter, and the Phoenix Suns won their first playoff series since 2010, eliminating the defending NBA champion Los Angeles Lakers with a 113-100 victory in Game 6 on Thursday night.

Jae Crowder scored 18 points for the second-seeded Suns, who won three consecutive games to send LeBron James to a first-round series loss for the first time in his 18-year NBA career.

Phoenix will meet Denver in the second round. Game 1 is Monday in Phoenix.

Chris Paul had eight points and 12 assists for the Suns, who jumped to a huge early advantage in the opening minutes of Game 6 while Anthony Davis struggled and eventually left due to his groin injury.

Although the Suns lost much of their early 29-point lead, they patiently held off the Lakers and James, who had 29 points, nine rebounds and seven assists.

Dennis Schröder scored 20 points and Kentavious Caldwell-Pope had 19 for the Lakers.

Michael Porter Jr. added 26 points, including 22 in the opening quarter, for the third-seeded Nuggets. Denver will take on Phoenix, which eliminated the Los Angeles Lakers in Game 6, 113-100. Game 1 in the series is Monday in Phoenix.

Damian Lillard finished with 28 points and 13 assists for the sixth-seeded Blazers. They led by 14 points in the third quarter but couldn’t stave off elimination. (AP)
< Previous PageNext Page >