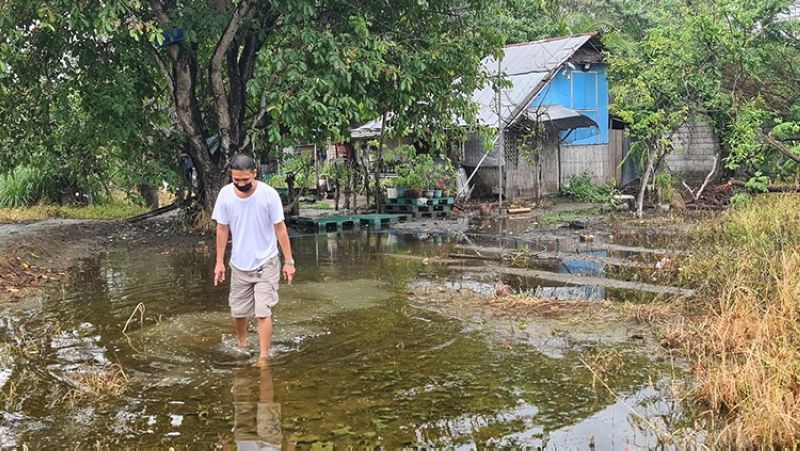 WITH only minimal volume of rain experienced in the past days, several houses in Barangay Sta. Monica, San Simon are already submerged in floodwaters.

Residents presume that floodwaters will become stagnant, if not rise, until the end of the year especially that several weather disturbances are expected to cross the country in the coming months.

"As early as June, the rainy season has not officially set in but we are already experiencing two feet of flood. What more when more typhoons make onslaught in our area. We have been in this kind of situation for the past three years," said Neri De Leon, one of the residents in Barangay Sta. Monica.

De Leon pointed at dysfunctional waterways and canals along Quezon Road as the cause of clogging of waters in low-lying areas such as his house.

"If only there is a functional drainage around our area, the water will be able to flow out and spare us from months-long of flood," he said.

Another resident, Ginesa Santiago, also lamented the lack of drainage on the newly-constructed road in the said barangay which further obstructed the flow of water.

"We are only asking for a functional drainage system. We understand the need to upgrade the roads as part of the development but we hope they will also think of the situation of residents, especially those who have no means to upgrade their houses," she said.

The local government, meanwhile, said it is already looking for a long-term solution to the years-long problem.

"We are including it to next year's funding but for the meantime, we can only pump out water to ease the situations of residents," Mayor Abundio Punsalan Jr. said.

The Department of Public Works and Highways through the First District Engineering Office's Maintenance Section, for its part, is set to inspect the drainages along Quezon Road.

After assessing the situation, the agency will deploy necessary equipment to unclog the waterways and canals.