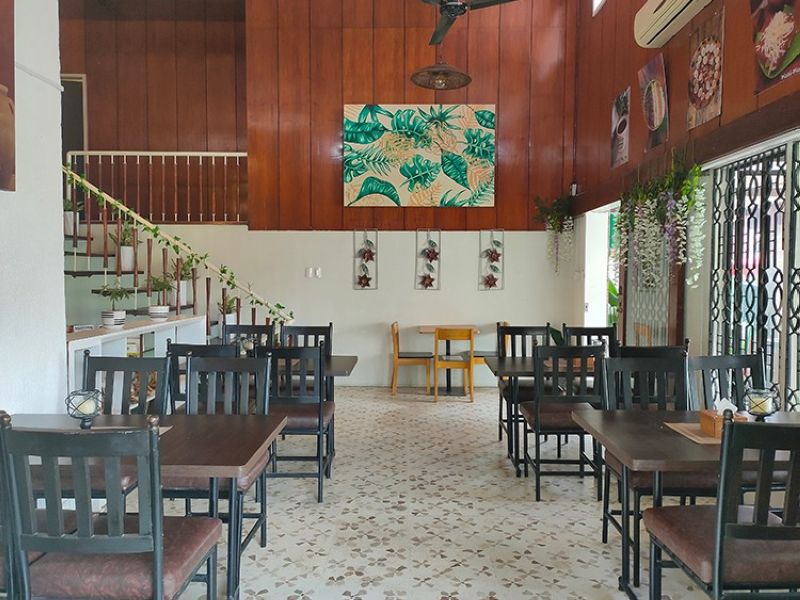 LIMITED DINING CAPACITY. Food establishments are allowed to operate in full capacity if they will operate for take-outs and delivery, 50 percent for outdoor dining services during MECQ. (RJ Lumawag)

FOOD establishments in Davao City are still allowed to operate under modified enhanced community quarantine (MECQ) but at a limited operational capacity.

According to the Department of Trade and Industry (DTI) Memorandum Circular (MC) 20-19, series of 2021, food preparation establishments such as kiosks, commissaries, restaurants, and eateries are allowed to operate in full capacity if they will operate for take-outs and delivery, 50 percent for outdoor dining services.

This is also supported by IATF Resolution No. 113, series of 2021, which was approved on April 29, 2021. It states that “Food preparation establishments such as commissaries, restaurants, and eateries may resume their indoor dine-in services in areas under Modified Enhanced Community Quarantine at an initial venue or seating capacity of 10 percent.”

“For this purpose, the application of Section 3 par.5(k) of the IATF Omnibus Guidelines on the Implementation of Community Quarantine in the Philippines, as amended, is hereby suspended,” the IATF Resolution 113 states.

While Section 1 of DTI MC 20-19 states that “food preparation establishments such as commissaries, restaurants, and eateries may operate with their indoor dine-in services at the venue or seating capacity of 20 percent, and 50 percent for al fresco or outdoor dining,” this is only applicable for “NCR Plus under GCQ with Heightened Restrictions.”

Meanwhile, Benjamin Lizada, Restaurant Owners Association of Davao City Inc. (RestoDC) president, said in a phone interview with SunStar Davao that despite the 10 percent allowable dine-in capacity during MECQ, some restaurants have opted to temporarily suspend their operations.

Those who will remain open, Lizada said they understand the situation and the need to implement MECQ.

Some restaurants with a garden or patio will also remain open for outdoor dining.

Lizada said restaurants may also appeal to landlords to ease the burden when it comes to their rent.

“Basi mag hangyo na pud mi sa ilaha nga iubos na pud kay 15 days baya mawala (We might be appealing to them to lower the rent considering that for the next 15 days will not be easy),” Lizada said.

“GCQ lisod gihapon. Kami hantod karon, we are hovering dira sa breakeven lang. Ok na nang breakeven. Bisan unsaon makapangkita pud mga tao, bisan 10 days lang. Unya, mabayaran pa namo ilang Philhealth, SSS, and Pag-ibig. Karon, dili lang man ang profit ginaapas, kanang mag survive jud (We were still struggling during the GCQ as we hovered around breakeven levels. We do not mind being at breakeven levels during this time. At least, we are able to pay for our staff, who are only working for 10 days, and at the same pay our obligations to Philhealth, SSS, and Pag-ibig. We are not only after profit nowadays, we also need to survive),” Lizada said.

Meanwhile, DTI-Davao City Director Rachel Remitio said they will continue to conduct random monitoring among business establishments to ensure that minimum health standards are being followed.

She also noted how business establishments in the city have been strictly complying with minimum health standards.

“Wala gyud mi problema in terms of compliance pagabot aning MC, maka-comply man gyud atong mga establishments (We had not problems when it comes to the establishments’ compliance with the MC),” Remtio said.

They did observe, however, how some customers have become the biggest problems of business establishments, especially restaurants.

“One thing na among gyud gina-remark sa among mga reports sir is the compliance of the customers. Ang public jud ang dili jud maka-comply like gahi-ulo or magalit. Mao gyud ang reklamo ng mga business establishments especially mga restaurants (We have remarked in our reports that it is the public who are not complying with the minimum health standards. Some are too stubborn while others would get mad. This is one of the concerns of the businesses, especially restaurants),” Remetio said.

She urged the public to practice minimum health standards to lower the risk of Covid-19 transmission.