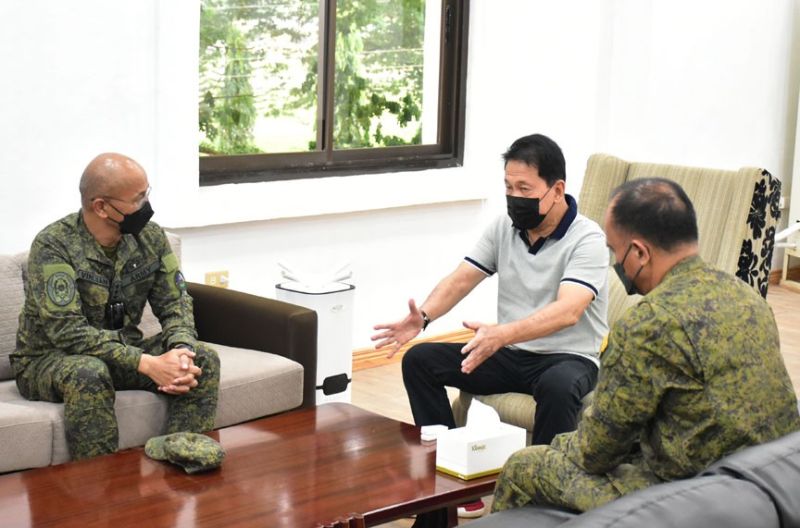 ZAMBOANGA. Lieutenant General Corleto Vinluan, Jr., commander of the Western Mindanao Command (Westmincom) orders the Sulu-based military troops to remain steadfast and to sustain the momentum in the campaign against terrorism. A photo handout shows Vinluan (left) in a courtesy visit to Sulu Governor Abdusakur Tan (center) during his three-day stay in the province. (SunStar Zamboanga)

THE military troops stationed in the province of Sulu have been ordered to remain steadfast and sustain the momentum in the campaign against terrorism.

Lieutenant General Corleto Vinluan, Jr., commander of the Western Mindanao Command (Westmincom), issued the order during his three-day visit to the troops, who are continuously pursuing the remaining members of the Abu Sayyaf Group (ASG).

“It is not yet time for us to relax. We still have few enemies to pursue. I know all of you have the passion to accomplish your mission,” Vinluan said.

Vinluan visited the army and marine brigades under Joint Task Force Sulu from June 1 to 3 to personally engage with and uplift the morale and welfare of the troops.

During his visit to the 1101st, 1102nd, 1103rd, and 4th Marine Brigades and his talk to the troops of the respective units, Vinluan lauded the resolve of the soldiers and ingenuity of the officers that led to numerous accomplishments, particularly in the neutralization of ASG notorious personalities.

“I congratulate everyone for your accomplishments. Sulu has never been this great. The peace and order situation continues to improve and this is attributable to the collective efforts of all the units here in Sulu,” Vinluan said.

“I can now proudly say that Sulu has zero kidnap victims, notorious kidnap-for-ransom group personalities were already neutralized, and the enemy’s manpower and capability have dwindled,” he added.

The last kidnap victim in captivity was rescued by the combined elements of the military and police in Kalupag Island, Languyan, Tawi-Tawi on March 21, 2021.

The abductors including Majan Sahidjuan alias Apo Mike, a notorious ASG sub-leader, and two of his comrades were neutralized by the operating troops in a clash in the Kalupag island, a day before the victim was rescued.

Vinluan noted that since January, the Joint Task Force (JTF)-Sulu has neutralized a total of 117 Abu Sayyaf bandits.

Among the 117, 14 were killed, 86 surrendered, and 17 were apprehended. Eight of the 17 apprehended personalities were captured in Sabah on May 8, through the constant coordination between the Westmincom and Eastern Sabah Security Command.

The eight include Abu Sayyaf sub-leader Sansibar Bensio and members Firdaus Omar, Munimar Binda, Ladin Mujahirin Faizal, Hamzah Faizal, Sansis Mohammad, Halim Akhir, and Yusuf Akram. They are now in the custody of the police in Sulu for the filing of appropriate charges.

“The continuous pressure you employ through your intensified operations forced the enemies to either surrender or transfer to nearby places and lie low,” Vinluan told the troops.

The JTF-Sulu also listed a total of 70 firearms recovered, 56 of which were high-powered, 11 were low-powered, and three were crew-served weapons.

Meanwhile, Vinluan acknowledged the support of local chief executives of Sulu to the military’s thrusts.

He also said the higher authorities are aware and are appreciative of the achievements of the military units at the tactical level.

“The Commander-in-Chief and Defense Secretary extend their commendations to all of you on your efforts to totally eliminate the menaces of society here in Sulu,” he told the troops.