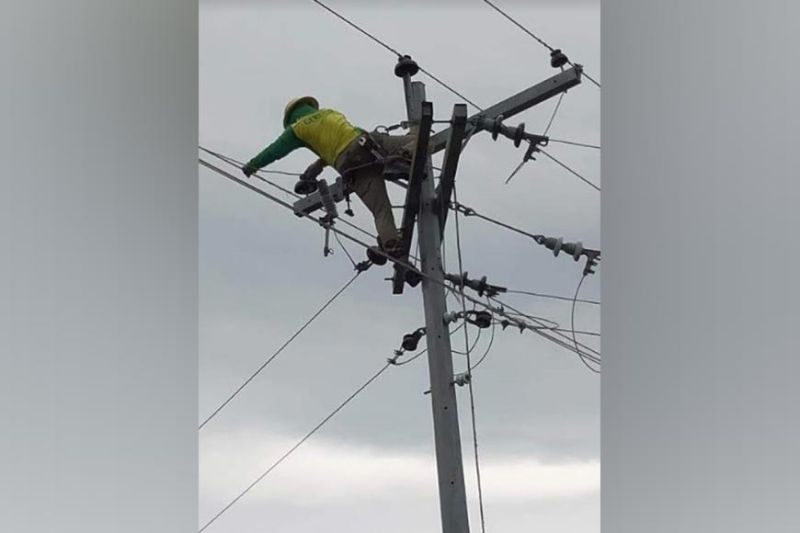 BACOLOD. A lineman of the Central Negros Electric Cooperative, a power distribution utility catering to the largest number of electric consumers in the province, during a maintenance activity. (Contributed Photo)

"WE HAVE nothing to hide."

This was stressed by Central Negros Electric Cooperative (Ceneco) president Jojit Yap, as she welcomed the move of the Provincial Government to create Task Force Ceneco amid various concerns hounding the local power industry like high electricity cost.

"We would gladly clarify all insinuations and misinformation being thrown against Ceneco," she added.

Metro Bacolod Chamber of Commerce and Industry (MBCCI) Chief Executive Officer Frank Carbon, who represented the business sector in the meeting, said the governor has recognized the need to look at the power overpricing concern raised against Ceneco, which also caters to areas under the jurisdiction of the provincial government.

Lacson told Carbon that he will issue the EO creating the task force so that the Provincial Government can call for a coordination meeting with the Ceneco Board, management, and Third-Party Bids and Awards Committee, among other groups.

"The task force will mainly help Ceneco to explore avenue where we can reduce power cost which will most likely result to lower electricity bills among consumers," he said, adding that the price difference between the contracted cost and lowest calculated bid, which is close to 100 percent, could have been huge savings on the part of households and businesses.

In fact, the group has already brought the issue up to the Department of Energy (DOE).

In a letter to Energy Secretary Eduardo Cusi dated May 29, 2021, a copy of which was obtained by SunStar Bacolod, Power Watch Negros Advocates Secretary-General Wennie Sancho asked the DOE top official to look into the matter that would have an adverse economic impact on the consumers.

Sancho told Cusi that the decision of the Ceneco Board of Directors on the "short-term extension" was made notwithstanding the fact that in the meeting last April 12 of the Competitive Selection Process (CSP) on the procurement of 20 MW baseload supply requirement for 2021 to 2031, there was already a lowest calculated bid of P3.2929 per kilowatt-hour (kWh) from KSPC.

The group is also keen on bringing the issue up to the national government particularly at the House of Representatives.

As the business sector, for its part, underscored the "very damaging" impact of expensive power cost during the PDC meeting, Carbon said overpriced power supply contract will affect households mainly by taking food on the table.

It will also prevent businesses to open up and hire more especially during this coronavirus disease (Covid-19) pandemic, he said, adding that the task force will concentrate on opening up the avenue for talking so similar woe in the power utility can be prevented in the future.

Its acting general manager and project supervisor laywer Dan Pondevilla welcomed the move of the consumer group, saying that he sees no problem with the consumer group pushing for a Congressional inquiry as well as raising the matter to the DOE.

Gamboa said the result of the bidding should be implemented immediately instead of extending the existing 40-MW power supply agreement at a reduced capacity of 20 MW with the Cebu-based coal-fired power plant.

On the basis of the resolution proposed by Gamboa, the City Council set a public hearing today, June 8.

Councilor Archie Baribar, chair of the committee on energy, said this will be a public hearing on whether the resolution be considered.

Baribar said the endpoint of the hearing is to see if are they going to follow or approve the resolution.

"We will discuss this resolution, ask everyone who has knowledge on this particularly on which is more favorable to the general public, and should we see that it is good to have this resolution passed, we will pass it," he added.

For her part, Yap said the public hearing sought by the City Council would be a proper venue to clarify matters of concern regarding the proposed resolution.

Yap said the Board and management of Ceneco are more than willing to make representations to clarify and discuss such concerns.

"Maybe this would settle once and for all the issues being raised that we believe are all misleading or incorrect information," she added.