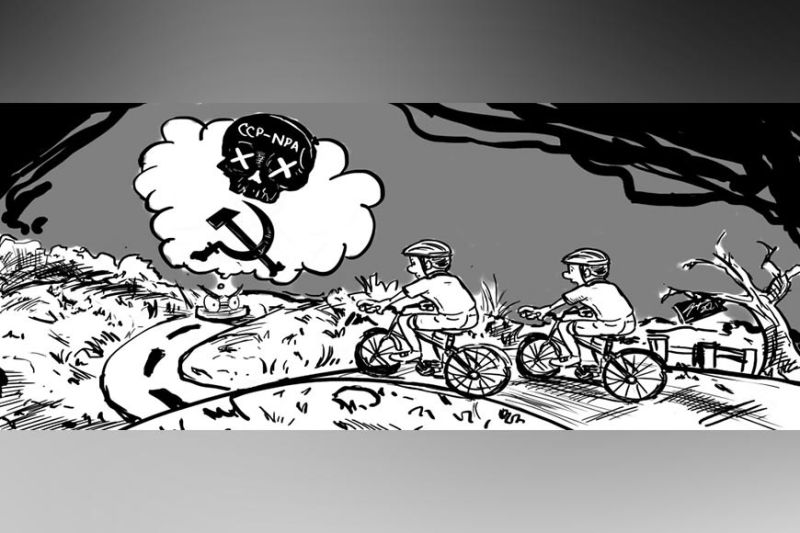 Who would have thought, a biking Sunday could be the last turn in the lives of Far Eastern University football player Keith Absalon and his cousin Nolven Absalon in Barangay Anas, Masbate City when they rose into an anti-personnel land mine (APM). Nolven’s 16-year-old son was injured as well in the blast.

Keith at once became poster boy in the most unfortunate terms. The defense sector and the public that denounces the movement promptly grab the chance for a strike at the image of the CPP-NPA.

On the other hand, the Communist Party of the Philippines and the New People’s Army (CPP-NPA) immediately took “full responsibility for the tragedy. CPP information officer Marco Valbuena, in a statement on June 9, said, “The entire CPP and NPA express their deep remorse over the untimely and unnecessary deaths of cousins Keith and Nolven Absalon and injury to others resulting form errors in the military action mounted by an NPA unit in Barangay Anas, Masbate City last Sunday.”

“There is no justification for the aggravation this has caused the Absalon family,” said Valbuena. “We fervently hope that the Absalon family, their relatives and friends, and the entire Filipino people can accept our profoundest apologies, self-criticism, and willingness to extend any appropriate form of indemnification,” added Valbuena.

These latest civilian deaths are only one among the many tied to the perennial conflict between government and communist rebels. The intermittent skirmishes have placed innocent civilians in the cross-fire. Government troops have also intruded into lumad schools either by mere suspicion or confirmed reports of rebel presence.

The incident that took the lives of the Absalons exposes publicly the CPP-NPA’s use of the APMs, a clear violation of the International Humanitarian Law (IHL), specifically on the Convention on the Prohibition of the Use, Stockpiling, Production and Transfer of Anti-Personnel Mines and on their Destruction. The use of APMs has been banned to limit any military powers’ weapon choices and to help ensure that no civilians are harmed. But the Masbate police said they seized several explosives and bomb components after a brief encounter with the alleged rebels.

The Commission on Human Rights reacted to the incident, reminding both government and communist troops to respect the IHL.

On the other hand, the Makabayan bloc, which has been tagged by the defense sector as a communist front, was quick to condemn the CPP-NPA for the incident. Bayan Muna Rep. Ferdinand Gaite said the Joint Monitoring Committee (JMC), a body tasked to probe human rights abuses of both government forces and communist rebels, should investigate the matter.

The JMC, however, may only operate under an ongoing peace negotiations betweeen government and the National Democratic Front. To recall, the Duterte administration on Nov. 22, 2017, cancelled the peace talks over “tragic and violent incidents all over the country committed by the communist rebels.” In the next two days after that, President Rodrigo Duterte signed Proclamation 360, formally terminating the peace talks with the communist rebels and consequently designated the CPP-NPA as a terrorist group. The President vowed there will be no peace talks for the rest of his term.

Sans a peace talk in sight, the Absalon incident will likely fade into oblivion among the many of its kind while the cycle of propaganda and armed encounters continue, with no concrete steps to bring everyone back to the negotiating table. We can go biking in Anas or on any breezy road on any Sunday in any corner of the country and be blown to smithereens anytime.