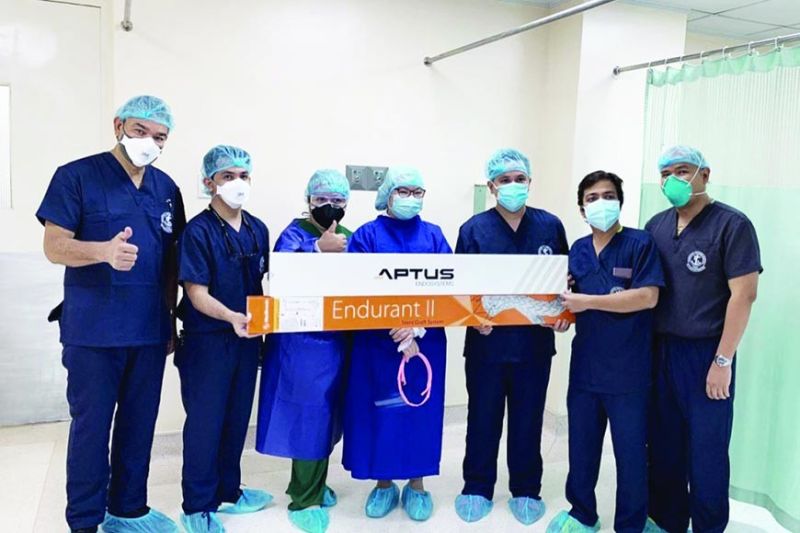 A TEAM of cardiac experts made history after they performed a unique life-saving medical procedure on a 72-year-old man at the Perpetual Succour Hospital (PSH) in Cebu City on May 22, 2021.

The team, led by Dr. Jonald Lucero, conducted the first-ever Endovascular Aneurysm Repair (Evar) with Endosuture on a 72-year-old man from Bohol who was suffering from abdominal aortic aneurysm.

The procedure, a milestone for the PSH-Cebu Heart Institute, was the first to be conducted in Visayas and Mindanao.

Lucero told SunStar Cebu that Evar is a minimally invasive procedure compared to the open surgical repair of the abdominal aneurysm.

Aneurysm, according to the Society for Vascular Surgery, is “a progressive weakening and ballooning of a blood vessel in the body.”

The abdominal aorta is one of the largest arteries in the body that supplies blood to all of the abdominal organs.

Lucero said the patient had a “very large” aneurysm about six to seven centimeters, which is bigger than the usual size of the abdominal aorta which is two to three centimeters.

Lucero said that during the procedure, they gained access to the patient’s aorta by making a small incision of about two to three centimeters in the patient’s groin area to visualize his femoral artery where they inserted their operating devices such as wires, catheters and endograft.

An endograft is a hollow fabric-covered tube that provides support for the weakened artery.

He said they did a tweaking on the technique by using EndoSuture or screws to make sure that the endograft that they placed on the aneurysm will not migrate and cause an endoleak, which is a common complication of Evar.

He said the entire operation lasted for two hours and 25 minutes and the patient is now in recovering.

“What’s unique with that case that we did, due to its challenging hostile aortic aneurysm neck anatomy plus there was the presence of proximal penetrating atherosclerotic ulcer, that’s why we were able to use the endoanchors and endo sutures as adjunct to the Evar,” Lucero said.

Lucero said the full recovery period after Evar takes two to four weeks, which is shorter compared to that of the open surgical repair which usually takes around six weeks to four months.

He said Evar also has a low mortality rate because the risk of any bleeding or rupture of aneurysm is less likely as operators will not touch anything in the abdomen area.

Lucero then expressed gratitude to his cardiac team composed of Drs. Edwin Tiempo and Monico Perez, who served as his assistant operators; Dr. Darwin Alvarez, who served as his cardiac anesthesiologist; Dr. Edwin Ybañez from Davao Doctors Hospital, and Lucero’s mentor, Dr. Enrique Posas from Manila, who, he said, have contributed greatly in the success of the procedure.

“With the current rate of research and advancement in cardiology, it was really a big opportunity for everyone, especially to our cardiology fellows to witness and experience, firsthand, this medical evolution which is endovascular aortic repair for the treatment of abdominal aortic aneurysm,” Lucero said. (WBS)