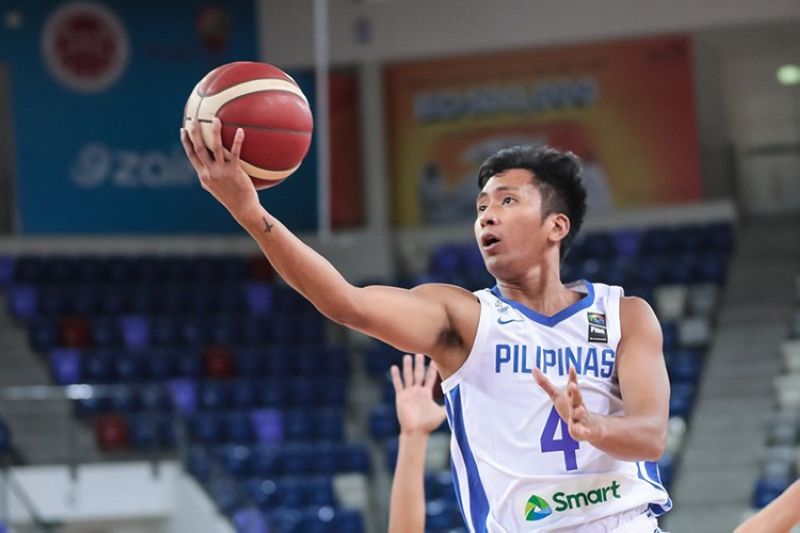 Former Cebu Schools Athletic Foundation Inc. (Cesafi) MVP Rey Anthony Suerte’s availability for the third window of the FIBA Asia Cup qualifiers in Clark, Pampanga is in question after he suffered an ankle sprain during practice on Wednesday at the Inspire Sports Academy in Calamba, Laguna.

According to the team’s resident trainer, Dexter Aseron, Suerte suffered the injury when he came down awkwardly on a rebound play, putting unnecessary weight on his ankle.

“By my estimation, it looks like a Grade 2 or 3 sprain so it could take one to two weeks to recover,” said Aseron.

The incident is a huge blow to the Gilas Pilipinas men’s basketball team, which is in the thick of preparations for games against Korea and Indonesia next week. The team has already lost guard Matt Nieto and wingman Dave Ildefonso due to different injuries and now, Suerte—who is the team’s captain—looks to be joining them on the sidelines for the FIBA Asia Cup qualifiers and the FIBA Olympic Qualifying Tournament in Serbia.

“The swelling is significant,” said Gilas program director Tab Baldwin. “He was recently designated as our Team Captain so this is not good news at all. It’s unfortunate because he was also doing very well in practice.”

Suerte, who starred at the University of the Visayas in the Cesafi, did very well in the second window of the FIBA Asia Cup qualifiers, tallying nine points in their first game versus Thailand before piling up four points, three boards, three assists and a steal during the second outing.

“Rey has been our captain and eldest member of the team so his maturity has been a stabilizing force in our group. He’s also an excellent three-point shooter who has a scorer’s mentality so he has become a reliable source of points,” shared Baldwin. “We will miss his leadership and scoring punch in the team.”

Suerte’s injury now leaves Isaac Go and Mike Nieto as the remaining 2019 draftees in the team as Allyn Bulanadi is still recuperating from a shoulder injury. However, out of all the values the Gilas men have learned not only from being together, but also from having to face injury after injury, one of their most important commitments is sticking to their “Next Man Up” mentality.

“As a national team, you always believe that you have the talent to replace fallen players. We’re currently looking at Jordan Heading and Jaydee Tungcab to step into the vacancy left by Rey’s injury. Jordan provides excellent shooting and some ball handling skills while Jaydee is an outstanding open court player who is also a tenacious defender,” Baldwin added.

“We are hoping that the impact on the team’s leadership will be minimized by more players stepping up and becoming more vocal, on and off the court.” (JNP)