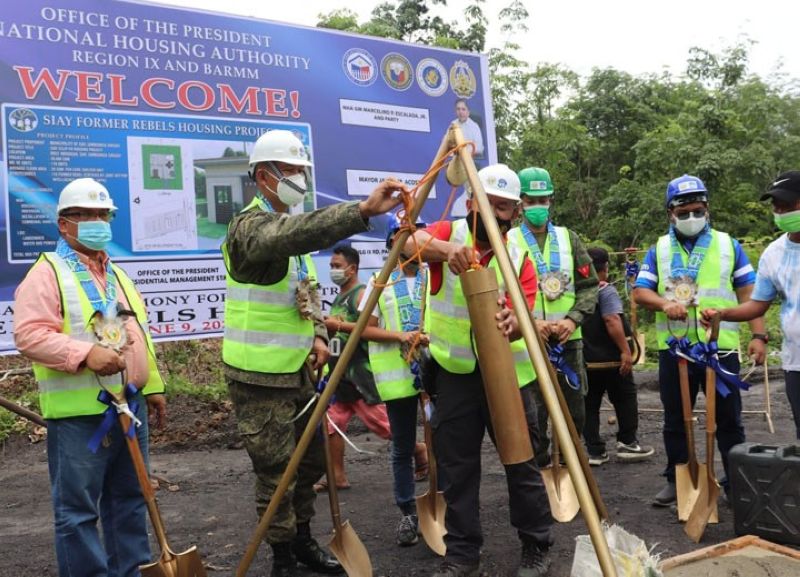 ZAMBOANGA. The Regional Task Force to End Local Communist Armed Conflict launches Wednesday, June 9, the housing projects intended for former members of the New People’s Army in the provinces of Zamboanga del Norte and Zamboanga Sibugay. A photo handout shows military and government officials conduct a groundbreaking ceremony that signals the start of the construction of the housing units. (SunStar Zamboanga)

A simultaneous groundbreaking ceremony was held Wednesday that signaled the start of the construction of the housing projects in the two areas.

The National Housing Authority (NHA) has allocated P50 million per project site that covers housing construction cost, individual septic tank, installation of solar panel and solar post and communal hand pump water well, while the local government units of the two areas have allocated the availability of land for the project.

“The housing projects are the fulfillment of the government's promise to provide better shelter and homes for our former rebels to help them rebuild their shattered dreams after years of deception and lies by the Communist Terrorist Groups,” said Engineer Al-Khwarizmi Indanan, NHA district manager.

Meanwhile, Brigadier General Leonel Nicolas, commander of the 102nd Infantry Brigade, pledged his commitment to assist the NHA in monitoring and securing the implementation of the housing projects.

“The realization of these projects will have a huge impact on our campaign to end local communist armed conflict, which is a manifestation of the government's commitment in addressing the root causes of insurgency,” Nicolas said.

“Just like most flagship projects of the government in the region, we will ensure to safeguard the unhampered implementation of these breakthrough programs of the government that will benefit the former rebels under our care and protection,” Nicolas added.

He said beneficiaries of the housing projects are former NPA rebels enrolled in the Enhanced Comprehensive Local Integration Program (E-Clip) certified by the joint military and police intelligence committee.

“We, former NPAs, are very happy and thankful that our government today listened to our calls and made our dreams into reality,” said alias Ka Joaquin, one of the project beneficiaries.

The two projects are targeted to be completed by December this year.

“With the start of construction of the housing projects, our FRs (former rebels) can now look forward to a more stable and progressive future as they join mainstream society. We at the RTF-ELCAC strongly encourage our FRs to take the responsibility of taking proactive actions to continuously counter any attempts by remaining WMRPC (Western Mindanao Regional Party Committee) members to recover lost ground.” Perlado said. (SunStar Zamboanga)