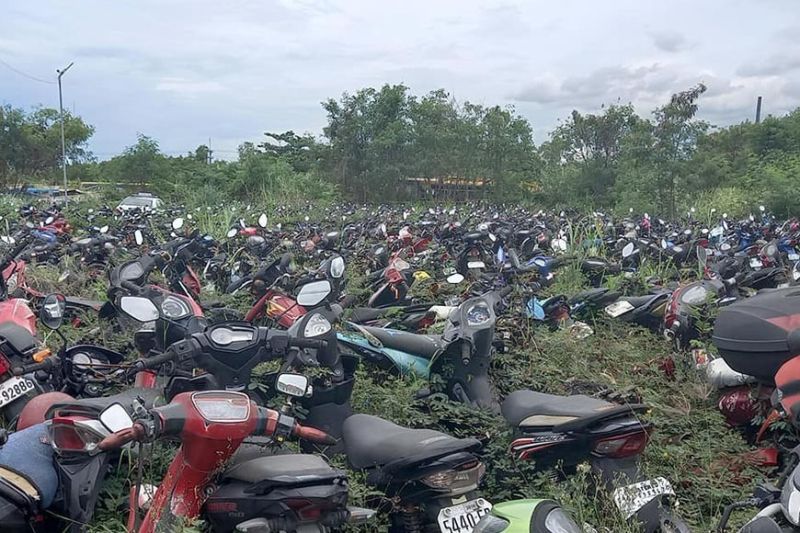 A GRAVEYARD OF MOTORBIKES. All kinds of vehicles, mostly motorcycles, that have been impounded since 2010 due to their owners or drivers committing traffic violations or failing to to present registration papers await to be claimed at the impounding area of the Cebu City Transportation Office. CCTO charges a daily storage fee of P100 for motorcycles, P300 for four-wheeled vehicles, and P500 for trucks. It would be cheaper to buy a new motorbike than pay the fines for the impounded one. (Cebu City Transportation Office)

AT FIRST glance, it may look like a junkyard with thousands of motorcycles and vehicles in various states of disrepair exposed to the elements amid overgrown grass.

But it is actually the impounding area of the Cebu City Transportation Office (CCTO). And the motorcycles and vehicles are not junk. They are waiting for their owners to claim them.

Based on the records of the CCTO, a total of 2,144 units have been in their custody since 2010. These include vehicles involved in accidents that were turned over by the Philippine National Police.

Paul Gotiong, deputy chief of operation and CCTO spokesman, said in 2020 and from January to May this year, they impounded 4,684 motorcycles, cars, trisikads, e-bikes, trucks and trailers.

But a total of 3,963 were returned to their owners after paying the fine for their violation, which usually involved not being able to present an official receipt or a certificate of registration or driving without a license, among others.

A city ordinance also charges owners a storage fee for every day their units are in the impounding area.

According to Gotiong, it’s P100 a day for motorcycles, P300 for four-wheeled vehicles and P500 for trucks.

Some owners cannot afford the penalty and the storage fee, which is why there are so many unclaimed vehicles in the impounding area at the South Road Properties.

Lyntoni Alburo, CCTO chief, said the intelligence traffic light system that the City installed has had great effect on the management of traffic, which is why he urged motorists to always obey traffic rules.

Mayor Edgardo Labella, who is currently on a three-week health leave, had also lauded traffic enforcers for keeping traffic under control. (PAC / PJB)