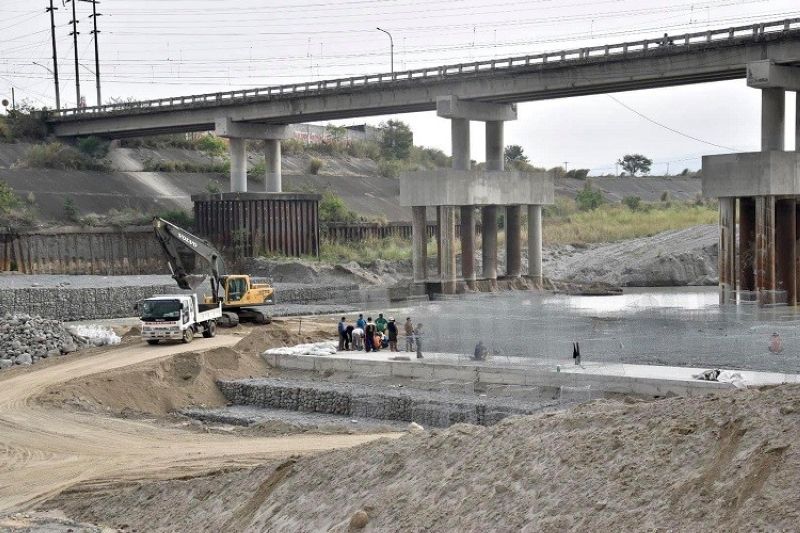 WORKS AT MANCATIAN BRIDGE. The Department of Public Works and Highways is currently working to stabilize both banks of Pasig-Potrero River and preserve the existing Mancatian Bridge in Porac, Pampanga. (DPWH)

THE Department of Public Works and Highways (DPWH) is currently working to stabilize both banks of Pasig-Potrero River and preserve the existing Mancatian Bridge in Porac, Pampanga.

DPWH Secretary Mark Villar said the countermeasure projects will restrain riverbed degradation and ensure safety by preventing the pile foundations of Mancatian Bridge along Angeles-Porac Road from being further exposed.

“Protecting the bridge is vital in keeping barangay Mancatian connected with the rest of Porac town,” he emphasized.

DPWH Undersecretary for Unified Project Management Office (Upmo) Operations Emil Sadain said the construction of dikes and groundsills with stepped dams downstream of Mancatian Bridge will stabilize the riverbed and reinforce the structural integrity of the 270-meter bridge and protect it from the threat of flood inundation and damage to properties.

Designed to fix the riverbed elevation and mitigate scouring by forces of turbulent flow during floods, construction of groundsill 1 including left and right dike is at 80 percent while groundsill 2 is at 91 percent. Another groundsill project started on February 2021 is now at 21 percent.

To maintain river channel capacity and stability, a 136-lineal meter dike along groundsills across Pasig-Potrero River at the downstream of Mancatian Bridge is being built and is now 96 percent completed.

Retrofitting works of the dike on both sides of Mancatian Bridge and other related facilities of the bridge are also ongoing at 80 percent which is more than 20 percent ahead of schedule.

“These protective engineering works are based on a 2019 Japan International Cooperation Agency study as structural measures to mitigate damage to the highly susceptible foundation of Mancatian Bridge where regular flow of lahar and water from eastern slope of Mount Pinatubo brought down through the Pasig-Potrero River,” Sadain explained.

The 9.54-meter wide concrete bridge replaced the old Mancatian Bridge destroyed by the initial lahar onslaught in 1991 and the temporary steel bridge constructed in 1995 that was also washed out during one of the most disastrous lahar events of 1997. (PR)