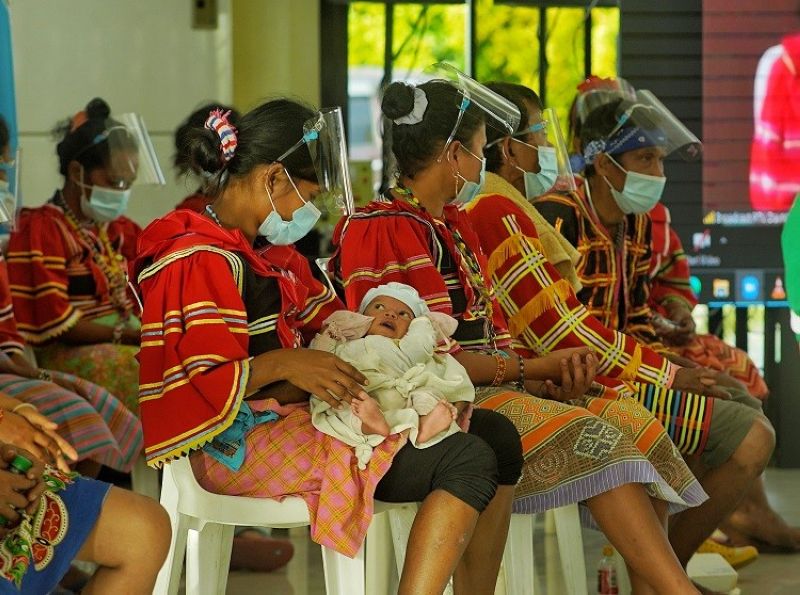 FIGHT CONTINUES. The mother of one of the alleged kidnap victims prepares to feed her infant baby during a press conference in Tagum, Davao del Norte with National Task Force-Elcac Spokesperson Undersecretary Lorraine Badoy together with the other parents of the alleged abducted children from Talaingod, Davao del Norte. The parents are now reunited with their children but vow to continue the case against the ‘Bakwit School 7’ after the Davao del Norte Office of the Provincial Prosecutor dismissed the kidnapping case against the group. (Photo by 10 DPAO)

THE National Task Force-Ending Local Communist Armed Conflict (NTF-Elcac) along with the Indigenous Peoples (IPs) insisted that the operation taking back the Talaingod IP children from a “bakwit school” in University of San Carlos (USC), Cebu was a rescue and not a raid.

This was made clear during a recent forum discussion at Provincial Pavilion, Tagum City, where the parents of the IP children and the children, themselves, insisted that the manner in which they were taken to Cebu was deceptive.

The statements of the parents and the rescued children are congruent in that a group of people from Haran came to Talaingod proposing to the parents to take their children to Haran for education and that they will be returned home after a month, to which the parents approved and gave permission.

Thereafter, the children were taken from Talaingod which, according to the parents and the children, was the last time they had contact with each other until the rescue operation.

The IP parents, with the help of NTF-Elcac and other concerned agencies, have filed various cases, including kidnapping, against the Bakwit School 7 (the collective name of the respondents of the case). Although the initial case fell through, the IPs and NTF-Elcac continue to work together to strengthen their legal offensive against the respondents.

In addition to the testimonies of the IP parents and the children during the forum discussion, former members of the Communist Terrorist Groups (CTGs) also detailed the connection of Bakwit Schools to the Communist Party of the Philippines-New People's Army-National Democratic Front (CPP-NPA-NDF).

They explained that the Bakwit Schools serve as a training ground to radicalize the children and the youth to eventually become part of the CPP-NPA-NDF’s manpower. They said that it is also a place where the CTGs exploit the IPs to conduct fundraising activities and earn funds from foreign sources.

The former members’ testimonies were in line with the experiences of the IP children while they were in Bakwit School in USC, Cebu according to Larry Mandacawan, one of the IP students rescued.

Police Regional Office-Davao Regional Director Police Brigadier General Filmore Escobal said the situation in the Bakwit School is similar to the one in Haran.

On the experiences of being in Haran, Awing Apuga, who was deployed as the Head of Education Committee of the Municipal Revolutionary Committee (MRC) of Talaingod, revealed that many IP children died during their conduct of rallies.

“Some of these IP children, we buried them in the roads we walked on as we made our way to UCCP Haran,” Apuga recalled.

Escobal said that the rescue mission in Cebu prevented such cruel experiences from happening to the IP children.

Adding to the list of crimes, which constitute the operation as a rescue, committed by the Bakwit School 7 is the violation of the Indigenous Peoples Republic Act Law.

In an earlier press conference held in the same venue, NTF-Elcac Executive Director Secretary Allen Capuyan emphasized that the IP’s rights to live in their culture have been taken away by the CPP-NPA-NDF, that it is not in the IP’s tradition to go on rallies against the government.