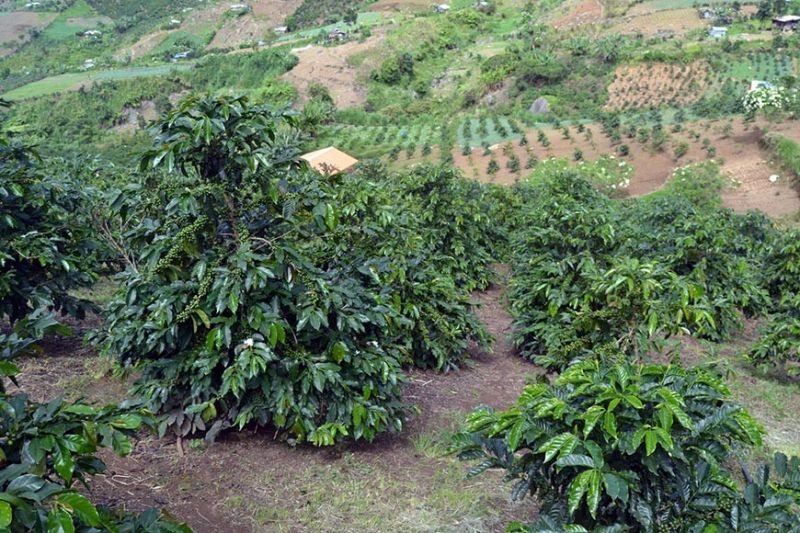 PCQC WINNER. In 2019, Marivic Dubria placed first after scoring an 85.36 for her natural processed coffee beans, which had notes of hibiscus, pineapple, lemon, green apple, thyme, basil, and spice. Her beans were cupped and featured at the Specialty Coffee Expo in Boston, Massachusetts in the United States in 2019. Photo shows her coffee plantation in Balutakay, Bansalan, Davao del Sur in 2020. (Photo by RJ Lumawag) 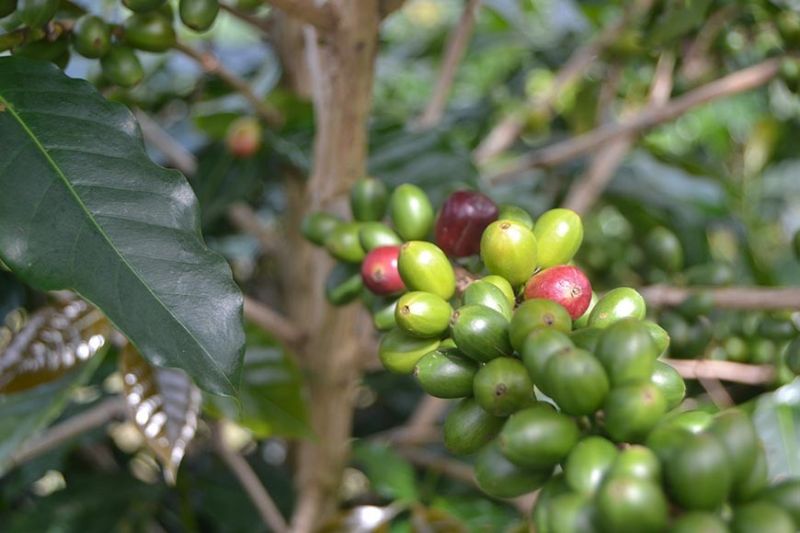 (Editor's note: This is a three-part series on the growing coffee scene in Davao Region)

DAVAO Region is known to be a major food basket in the country due to the variety of crops and fruits it produces. It is popular for the durian and pomelo. It is also known as the country's top producer of cavendish bananas. Recently, Davao Region has also been declared as the Cacao Capital of the Philippines.

In recent years, we are also seeing another crop industry that would soon be associated with Davao too -- coffee.

According to the Philippines Statistics Authority (PSA), Davao Region produces 17.8 percent of the 60,000 metric tons (MT) of coffee produced nationwide in 2019. Davao Region is the second-largest producer of coffee in the Philippines, tied with the Bangsamoro Autonomous Region of Muslim Mindanao (Barmm). The biggest coffee producer in the country is Soccsksargen at 34.2.

Coffee For Peace (CFP) Founder and Chief Executive Officer Joji Pantoja said Davao Region's edge is in its arabica and robusta coffee beans, which are widely planted by most coffee farmers in Davao Region. These two varieties that are also beginning to shine in the domestic and international coffee market.

According to the Bureau of Plant Industry of DA, Arabica is regarded for its flavor and aroma.

Mugshots founder and local coffee roaster Beauford Ma said "arabica beans possess a satisfying amount of acidity and tend to have a multi-layered intricacy of flavors and aromas."

ACDI/VOCA Business Development Coordinator Emmanuel Quisol, in an online interview with SunStar Davao, said the region's arabica coffee beans have the potential to make a mark in both the international and local markets.

"One of the strengths of the Arabica coffee beans produced from Davao Region is their consistency in terms of quality. This is illustrated in their performance in the past and most recent results of the Philippine Coffee Quality Competition (PCQC). Entries from Davao Region have consistently landed in the top list," Quisol said.

This is evident with the recent success of Davao coffee farmers in the Philippine Coffee Quality Competition (PCQC) on May 26, 2021.

Five farmers from the Balutakay Coffee Farmers Association (Bacofa) in Bansalan, Davao del Sur were among the top six in the Arabica category of the PCQC 2021.

Shaun Ong, Head Judge of PCQC 2021, praised the arabica beans from Davao Region, saying that they are among the best he has tasted from the country.

"This year’s winning specialty Arabica coffee of Marites Arellano has an average score of 85.86, which is super close to the preferred international score of 86 for this category. We are getting there, and I won’t be surprised that in the next year or two, we will be seeing coffee entries achieving higher scores," Quisol said.

This is not the first time our local farmers placed high in the annual PCQC, which is now in its fourth year.

In 2018, Juanita Amaba placed second in the Arabica category after she scored an average of 86.03. Her natural processed beans had notes of caramel, guava, banana, rose, and sweet spice.

In 2019, Marivic Dubria placed first after scoring an 85.36 for her natural processed coffee beans. Her beans had notes of hibiscus, pineapple, lemon, green apple, thyme, basil, and spice. Marivic's beans were cupped and featured at the Specialty Coffee Expo in Boston, Massachusetts in the United States in 2019.

"Davao Region is now positioning itself as premier source of high-quality specialty Arabica coffee after its series of wins in the PCQC. Undeniably, some of the best-tasting Arabica coffee in the country comes from this region," Quisol said.

He added that local farmers can take advantage of this emerging status and may expand their production to other areas with higher elevations.

At present, you can find arabica plantations in several areas at the foothills of Mount Apo.

"Aside from the areas in Davao del Sur that are surrounding Mt. Apo, there are other locations within the region that can be developed into sustainable and environmentally friendly coffee farms such as those in Talaingod in Davao del Norte, some areas in Davao Oriental and in Davao Occidental as well," Quisol said.

When it comes to robusta coffee, despite being widely planted by most coffee farmers in Mindanao, Quisol said Davao Region coffee farmers have yet to tap the opportunities that come with it.

Since robusta coffee thrives in lower elevation at below 800 MASL, many of the areas tend to be more dedicated to other crops.

"Opportunities for Robusta coffee in Davao Region has yet to be fully materialized. I think this will require some convincing among farmers who are used to producing other equally important crops such as coconut, cacao, bananas, mangoes, and rice," Quisol said.

After working with coffee farmers in Mindanao and other parts of the country, Pantoja said they are pushing for the robusta.

"I am entering robusta kasi (because) that is where we have so many farmers. So, gusto kong gawin talagang popular yung robusta para matulungan pa yung mas maraming farmers (I want to also popularize the robusta because we can help more farmers)," Pantoja said.

However, what they are promoting right now in CFP is not simply the pure robusta but the fine robusta.

Ma said when brewed, pure robusta has low to no acidity and usually tastes earthier, woodier, more rubbery, and more bitter than the arabica.

"With regular robusta, you really get a dry throat and if you feel it, your throat feels scratchy because of the salt, and it is really bitter on the back of the tongue," Byron Pantoja, CFP vice preside for operations and Q Arabica and Robusta grader, said.

Byron added, "with the fine robusta, it is super smooth. You feel like you have a full mouth, a nice heavy coffee but it’s really smooth and it tastes sweet and good."

Pantoja said CFP is helping several coffee farmers to develop and improve the quality of their robusta coffee.

"What we do here in coffee for peace, we blend it. We have the specialty arabica mixed with fine robusta, yun ang pinapopularize namin (we are working on popularizing this)," Pantoja said.

The arabica and fine robusta blend is CFP's Kapeyapaan 4AM Arabica & Robusta Coffee. Coffee beans are sourced from Mount Apo and are 33.3-percent robusta and 66.6-percent arabica (Catimor varietal).

Pantoja said Koreans are coming to the Philippines looking for fine robusta.

Despite the recent gains of the local coffee industry, leaders in the industry say there is still room for improvement for our coffee farmers both in quality and quantity.

Pantoja said in competing in the international coffee market, there is a need to improve the quality considering that the Philippines does not have large contiguous lands to plant a massive coffee farm.

"We have to take note that the Philippines is a group of islands. Therefore, wala tayong panlaban kay (It is not easy to compete with) Vietnam that could plant sa massive and areas nila. So our only edge is to produce... premium and specialty coffee and fine robusta," Pantoja said.

"While the potentials of Philippine coffee are recognized through the PCQC, we also must note that there is a huge demand for Philippine specialty coffee in the local market... Also, for a country that is a net importer of coffee, we cannot meet domestic demand in terms of volume. And the demand is expected to continuously increase in the coming years," he said.

CFP and ACDI/VOCA are currently working with DA and Department of Industry to improve coffee quality and raise awareness of Philippine coffee.

Part 2: Demand for local coffee going up but production struggles