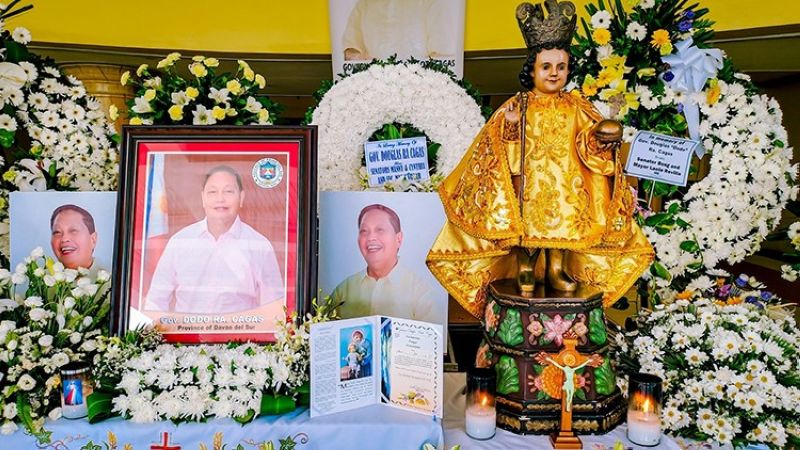 According to Mayor Cagas, the late governor "spent most of his life in public service and had endowed fruitful years in uplifting the lives of his fellowmen" in Davao del Sur, and Digos City.

"His strong political will and untiring commitment to bring sustainable development not only for Davao del Sur but also to Digos City, have touched the lives of many and transformed our Province and City into flourishing localities in the country," the mayor said in the EO.

He added the cityhood of Digos materialized because of Governor Cagas, who led the drafting of Republic Act No. 8798, converting the Municipality of Digos into a component city of the province in November 1998.

During the whole year of mourning, all government agencies, units and installations, private/business establishments, and private and public schools of all levels will put all flags at half-mast and offer prayers every 3 p.m.

“We mourn the tragic demise of the most charismatic, and the best public servant and leader in the Province of Davao del Sur. The saddest moment in the lives of the People of Davao del Sur and all Digoseños especially to those who have experienced his brand and superb quality of public service, those people whose lives are somehow getting better by the services and projects, our good governor rendered,” Mayor Cagas added.

Governor Cagas passed away on Thursday morning, June 10, 2021, due to complications of Covid-19, his family confirmed.

The governor’s only son, Vice Governor Marc Douglas, took over his father’s post while Senior Board Member of Davao del Sur’s First District and Mayor Cagas’ brother, John Tracy, will be the new Vice Governor.