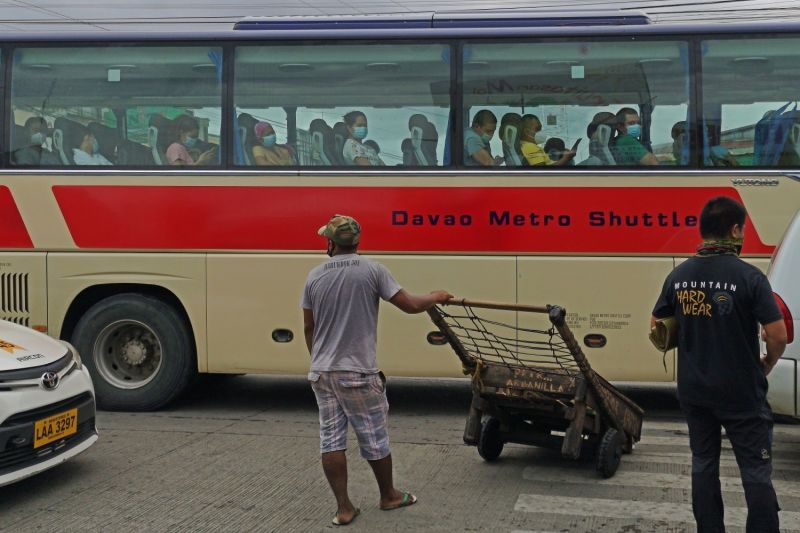 Dcott head Aisa Usop said when there was a downtrend in Covid-19 cases, bus trips started to gradually normalize, with an average of 600 bus trips daily.

The number of trips is nearing the pre-pandemic figure of 700 to 800 trips per day, reaching more than 1,500 bus trips daily during "peak" or holiday seasons.

Usop, in a previous interview, said bus trips coming in and out of the city decreased since the tightening of border controls started.

Davao City Mayor Sara Duterte-Carpio issued on Saturday, May 8, 2021, an executive order adopting the Joint Regional Interagency Task Force for the Management of Emerging Infectious Diseases-Regional Task Force Against Covid-19 (RIATF-RTF) 11 Resolution 01 series of 2021 or the tightening of border controls. It took effect in Davao City on Friday, May 14.

Following its implementation, bus trips decreased to 300 to 400 per day.

"Nung nag-declare naman tayo ng MECQ, lalong bumaba. (When it was declared that the city would be under MECQ, the number of bus trips further decreased.) From 300 to 400 [bus trips], our recent number of trips is nasa (now at) 180 plus lang tayo to 200 plus ang pinakamataas na bus trips a day natin," Usop said in a virtual presser on Friday, June 11.

Davao City's MECQ status took effect on June 5 and will end on June 20. This is due to the current surge in Covid-19 cases in the city.

Usop said they are currently discouraging non-essential travels with the ongoing surge of cases being experienced in the city.

"We are catering to passengers not only from Davao City, but also the entire Mindanao, including Visayas and Mindanao. But sad to say, kung pwede lang, kung hindi importante, huwag na lang tayong mag-travel (if it is not important, we discourage you from traveling) for your safety," the Dcott official said.

She also discouraged bus drivers from picking up passengers along the way. She added that buses can pick up passengers from terminal to terminal only, in accordance with the IATF and Land Transportation Franchising and Regulatory Board (LTFRB) guidelines.

Despite the existing policy, Usop said they continue to receive reports of drivers violating it.