How Davao faces its garbage concern 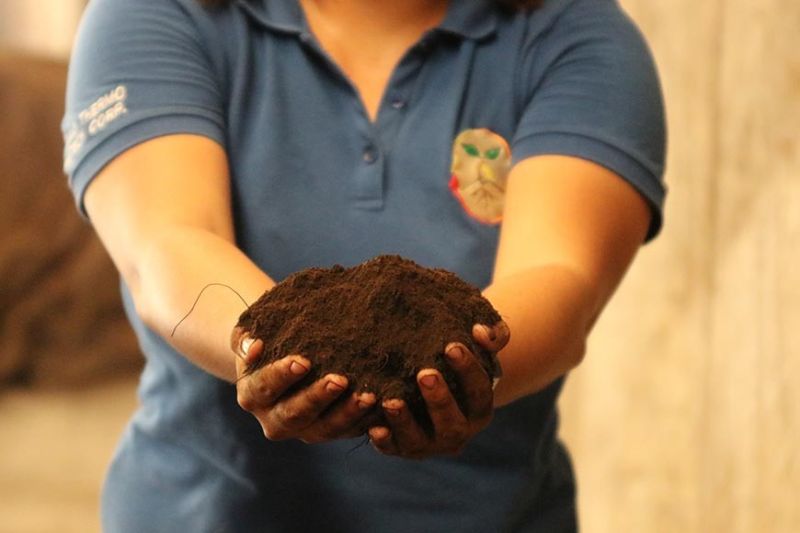 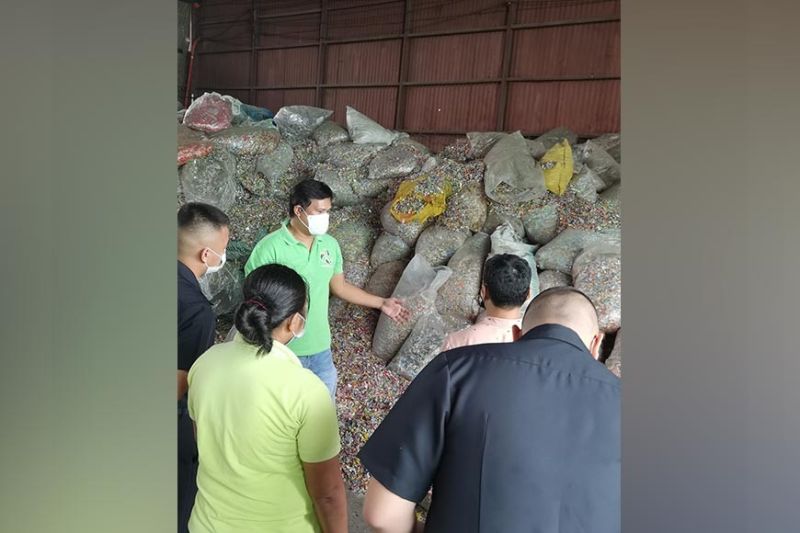 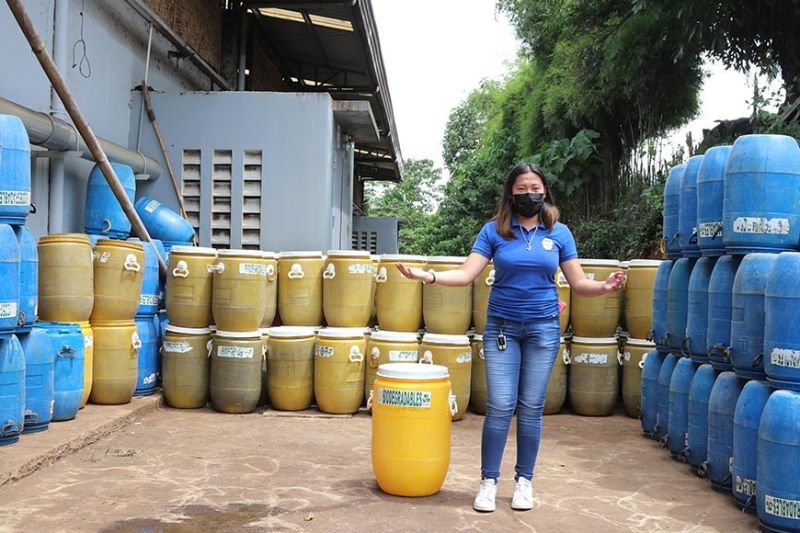 DAVAO. Lyen Queen Yap-Joaquin, business development officer, shows the corner where they usually clean and get rid of stubborn waste stuck inside the yellow drums. (Photo by John Orquiza) 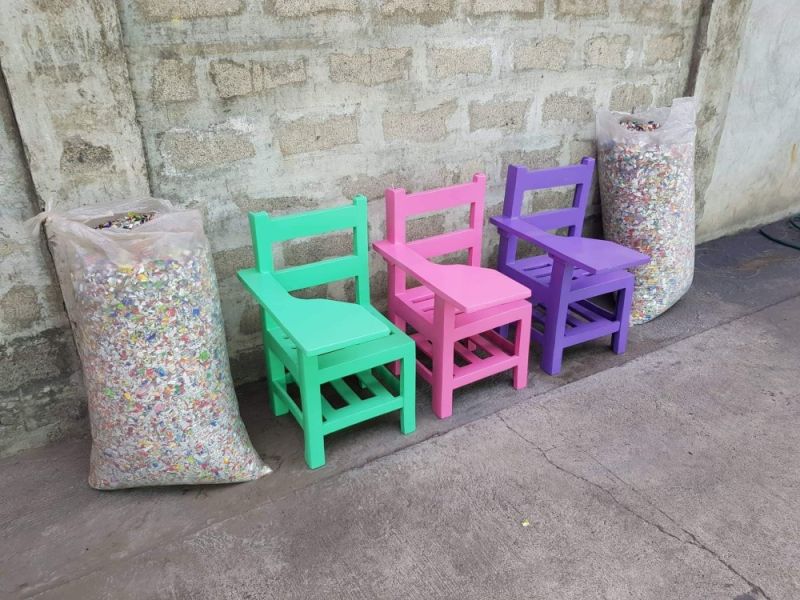 EVEN before the pandemic, the city government of Davao and the different environmentalist groups were already anticipating the exhaustion sooner or later of the 11.75-hectare landfill the city currently uses in Carmen, Tugbok District.

The city’s solution to this waste problem has already been highlighted and made public for several years now. In 2017, Mayor Sara Duterte-Carpio even visited a Waste-to-Energy (WTE) plant in Kitakyushu, Japan to observe their use of the technology. The project, with an initial grant amount of P2.5 billion through official development assistance (ODA), is in partnership with the Japan International Cooperation Agency (Jica). However, in a February 2020 interview, project manager and City Administrator for Administration lawyer Dwight Domingo said additional funding for the facility is still being sought.

“Apparently, right now, the Department of Energy already told us na wala na to (that it was scrapped). Dili na available ang fix na price sa pagbaligya og kuryente (The fixed price for the electricity is no longer available) and because of that the financial projection of study was changed,” Domingo said, who added that the project requires participation of utility companies such as Davao Light Power Corporation (DLPC).

The WTE project was initially proposed to be constructed in a 10-hectare property in Biao Escuela, Tugbok District.

However, environmentalist groups in the city continue to advocate against WTE because of its impact on the environment and health of the residents. According to them, the process of incineration produces toxic chemicals also known as dioxins, which are cancer-causing and are extremely dangerous.

They said a drop of dioxin in a lake "can "cause harm to the fish living there.” This was first said by Jorge Emmanuel, former United Nations (UN) Chief–technical advisor on environmental concerns in 2016 when the news of proposed WTE in Davao made noise again.

Emmanuel added the Philippines is not financially ready for the adverse effects of WTE on the health of the people.

The Carmen landfill is getting filled to the brim and the City Environment and Natural Resources Office (Cenro) projects it will be fully exhausted by 2023.

Since March 2020, when the city started experiencing the pandemic, waste produced by the city ballooned to 600 to 650 tons per day. Cenro plans to purchase another 10-hectare property adjacent to the existing landfill for expansion.

Despite WTE, Cenro head Marivic Reyes said there is still a need to rehabilitate the sanitary landfill, as the ashes from the incineration will be buried in the landfill.

On average, a landfill’s life span usually lasts five to eight years. The Carmen landfill was first opened in 2008 and its extended life was said to be partially because of households observing proper waste segregation.

Making use of biodegradable waste to its full potential

Many private individuals also believe that before getting into a huge commitment such as the WTE project, it is also crucial that Dabawenyos understand how to properly dispose of their garbage.

The Davao Thermo Biotech Corp. is an environmental solutions company currently engaged in biodegradable waste management and natural biofertilizer production. It started The Yellow Drum Project with companies but later on engaged with household owners.

The Yellow Drum Project provides a 60-liter yellow drum to their subscribers where different types of biodegradable waste are collected and will eventually be converted into biofertilizer in their facility in Toril.

“We have to change climate change realities. We have to change our attitude with respect to how we dispose of our biodegradables. In our law, it says that biodegradables must have to be composted at source – meaning in our homes, then in our barangays. It’s not supposed to go to the landfills,” Dr. Puentespina added.

The process used by Davao Thermo Biotech Corp. is Japanese-patented and is the only company in the country permitted to do it outside Japan.

“We use hyperthermophilic aerobic composting. Hyperthermophilic means ‘high temperature’ while aerobic requires oxygen. We use special bacteria that help with the decomposing of the waste. We have ‘blowers’ to supply the air requirement for decomposing. Within 45 days, the fermentation process takes place while we also turn the mound of treated waste every now and then to let the air through and for more balanced decomposing,” said Plant Manager Aimea B. Lumpay.

The Yellow Drum Project currently has more or less 40 household subscribers in different parts of Davao City while it also continues to work with restaurants, companies, and other private institutions. Puentespina shared that these companies follow environmental standards to continue operation and so The Yellow Drum Project partnership was fondly responded to by private sectors.

“We want more people to be aware that this project exists – that there is a solution for their biodegradable waste. They don’t need to mix it with their non-bio waste and throw it in the trash. They can actually make something good out of their biowaste. We understand that not all people have the capacity or resources to do composting at home so this project is actually ideal for those people,” said Lyen Queen Yap-Joaquin, business development officer.

Winder Recycling Company in Sasa, Davao City has been focusing on converting single-use plastic to useful items that would last for a long time such as tables, benches, school chairs, pots, and many others.

Engineer Winchester Lemen shared that their equipment can accommodate other types of plastic or non-biodegradable waste, but they decided to specifically focus on single-use plastic, those that are not accepted in junk shops as these types of waste are rarely recycled and some, unfortunately, end up in the sea.

The collected garbage goes through a meticulous process in their plant in Sasa before it becomes a durable repurposed item. The single-use plastic items are broken and cut into tiny pieces before they are washed and dried. Then they proceed to the melting machine, keeping the 14-percent moisture content, where the plastics are molded into molders depending on the planned by-product. They have molders for chairs, tables, benches, plant pots, etc.

Aside from these small items, Lemen also looks forward to bigger repurposing projects such as bricks to make houses. He said they have worked hard to ensure the durability of their products.

Winder Recycling Corporation and the Davao Thermo Biotech Corp. continue to seek partnership with the local government to influence more people in segregating their waste. They understand that with the mandate of the government, especially at the barangay level, it would be easier for residents to participate.

As the local government has yet to respond, the two companies continue to form professional relationships with huge companies to help with their waste problems.