Close to 900 families forced to evacuate due to Saturday flood 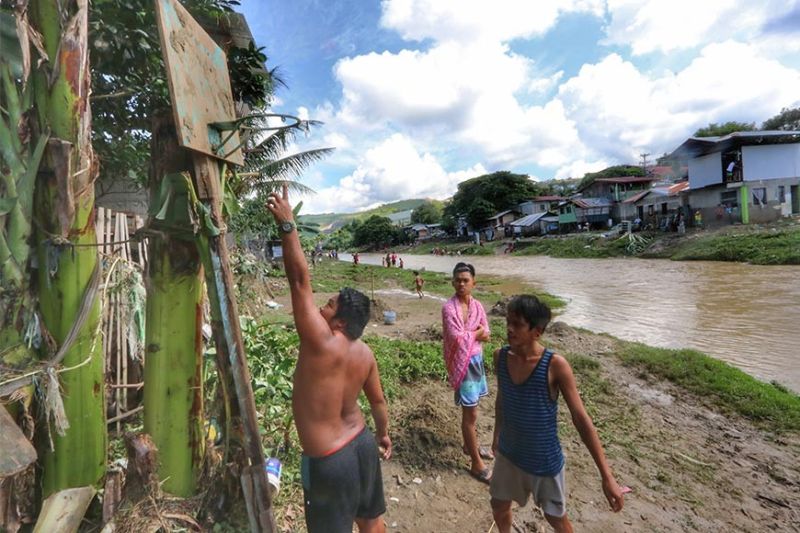 FLOOD LEVEL: A man living along the Mananga River in Talisay City, Cebu says the water reached as high as the basketball ring when the river spilled its banks Saturday night, June 12, 2021. The City Government was forced to evacuate 851 families in five barangays. Most of them were back home Sunday afternoon, June 13. (Photo by Amper Campaña)

A TOTAL of 841 families were evacuated from five barangays in Talisay City, Cebu Saturday night, June 12, 2021, after the Mananga River overflowed.

Joy Tumulak, chief of the City of Talisay-Traffic Operations and Development Authority (CT-Toda), dispelled rumors that the flooding was caused by a damaged dam in Barangay Campo 4.

He said majority of the affected residents live in low-lying areas that were quickly submerged by the rising water level when the river spilled its banks.

“In the afternoon, we already noticed the dark clouds up in the mountains,” he said in Cebuano.

Tumulak believes it rained really hard in the uplands early in the evening, which caused the river to swell.

The City Disaster Risk Reduction and Management Office (CDRRMO) received a report of flooding in the Mananga River at 6:55 p.m.

Rescuers who reached Sitio Bahala in Barangay Dumlog were forced to wade in water that reached as far as their necks.

As a result, Santillana immediately sought the assistance of the Philippine National Police and the Bureau of Fire Protection, which dispatched personnel to the affected areas at 7:25 p.m.

The Philippine Coast Guard also assisted in the rescue operation.

The floodwater began to recede around 9 p.m. By 10 p.m., the water was only knee-deep.

The CSWDO and the office of Mayor Gerald Anthony “Samsam” Gullas Jr. provided evacuated residents with mats, dinner and breakfast on Sunday, June 13.

Most of the evacuees returned to their homes later that day. However, they were advised to leave immediately should the water rise again.

In Cebu City, the landslides and flooding that occurred following the heavy downpour Saturday morning affected more than 90 families. However, there were no reported injuries or fatalities.

Based on the report of Cebu City Disaster Risk Reduction and Management Office (CDRRMO), as of midnight of June 13, a portion of a house in Barangay Lahug was affected by a landslide. Its seven occupants were evacuated to the barangay hall.

In Barangay T. Padilla, the flood affected 20 families in Sitio Soquite, 20 in Sitio Bukog, 15 in Sitio Indian and 15 in Sitio A. Valle.

The rivers in Sinsin Proper in Baranga Sinsin, in Sitio Purok 7 in Barangay Cambinocot and in Sitio Camarin in Barangay Bonbon also overflowed, according to the CDRRMO. So did the river in Sitio Pili in Barangay Malubog and the Tejero Creek, among others, it added.

The Cebu City Agriculture Department (CAD) has been monitoring crops in mountain barangays for possible damage.

However, City Agriculturist Joelito Baclayon said his office has not received any report of damage to crops or animals, as of Sunday.

Baclayon said CAD personnel, as well as farmers, were instructed to assess farmlands to determine effects of the rain.

According to the weather bureau Pagasa, Metro Cebu can expect high chances of rain in the next few days with occasional heavy rains as the country officially entered the rainy season. (REV, KAL, JJL with a report from WBS)