Bacolod mayor calls for unity to attain 'freedom of well-being' 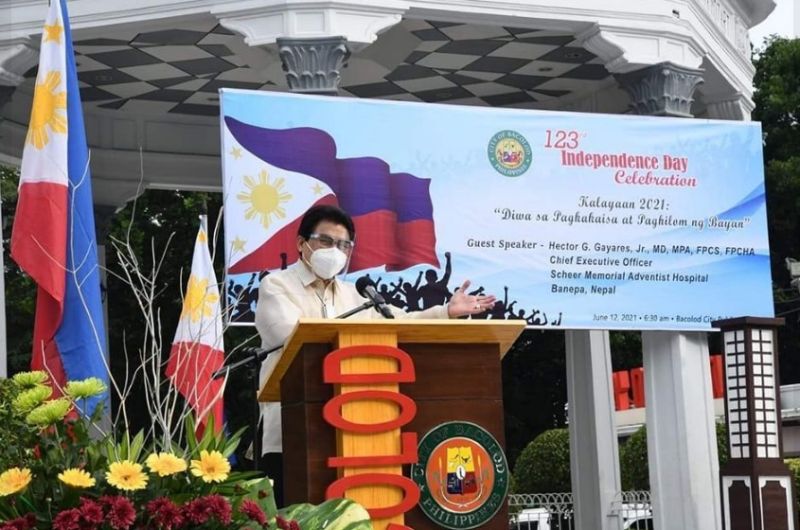 “Let me appeal and awaken in each of you that innate heroism and the instinct to survive in order to attain that freedom of well-being. We cannot remain passive or just be an observer. Let us all be up in arms. How? We can do it by simply observing the health protocols demanded from each of us,” said Leonardia during the 123rd Philippine Independence Day commemoration at the Bacolod City Public Plaza Saturday, June 12, 2021.

The mayor emphasized that working together as one city is crucial in containing the spread of the viral disease in view of the “spike and rebound” of local cases.

“These are the simple things that we can do daily for as long as the threat of the virus remains: wear your masks properly, avoid mass gatherings, sanitize as often as you can, avoid crowded places, and consult a doctor at once if you feel you need to,” Leonardia said.

Meanwhile, Dr. Hector Gayares Jr., this year’s guest of honor and keynote speaker, highlighted the "sterling character and unwavering spirit of the Filipino people” in his message.

Gayares, who is now chief executive officer of the Scheer Memorial Adventist Hospital in Banepa, Nepal, said these qualities are the same qualities needed from Bacolodnons during this pandemic.

“Let us not forget that each of us has a role to fulfill. This is not just only through the efforts of the government but that it calls for our individual participation —observance of minimum health protocol, getting ourselves vaccinated and building up our health,” stressed Gayares, who is also a member of the Covid-19 Vaccination Council (CoVaC) of the City.

Every tip is represented by each letter of the word “FREEDOM.”

“F” stands for fluids. “We are advised to drink at least eight glasses of water per day. I say water. Not beer or any alcoholic beverages,” said Gayares.

“R” stands for rest. The EOC deputy medical said that one should get at least six to eight hours of sleep every 24 hours.

“The time of sleep should coincide with our circadian rhythm — awake and working by day, asleep and resting by night. That is the natural order for the restoration of cellular functions and life,” he added.

The first "E" stands for exercise. Gayares encouraged the public to exercise even for 30 minutes a day.

“There is a scientific basis of what is commonly known as a ‘runner’s high.’ It gives you a feeling of well-being. It erases the stresses that bring down your immune system,” the doctor said.

The second “E,” meanwhile, stands for environment. For this tip, Gayares encouraged the public to expose themselves to the sun to get Vitamin D.

“Vitamin D is crucial for the optimal function of our immune system. A 30-minute exposure to the early morning sun will provide for you 20,000 to 30,000 IU of Vitamin D. Likewise, such exposure reduces the risk of respiratory tract infection by 30 to 70 percent,” he said.

“D” stands for divine help. “All the other concepts that each letter stands for will be for nothing without the help of our Almighty God. I believe this concept is universal,” said Gayares.

“O” stands for outlook, which Gayares said refers to “our mental health, our outlook in life, our perception of things, events and circumstances.”

According to him, one’s outlook should “veer on the positive side, obey the protocols, adapt a happy and grateful attitude.”

Lastly, “M” stands for meal. “Food is the fuel for our body,” said Gayares.

He went on, saying: “If we own a car, we usually refer to the manufacturer’s manual what fuel should be pumped into the vehicle — is it gas or diesel? We cannot just simply substitute the fuel, otherwise, the car will not run optimally. Same as with our body.”