Sara tells Leni to not involve Davao City in her ‘politicking’ 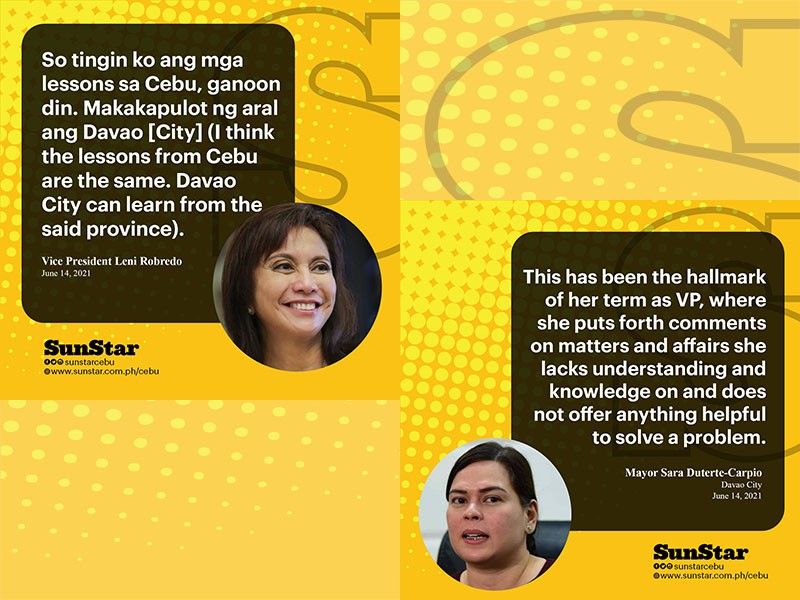 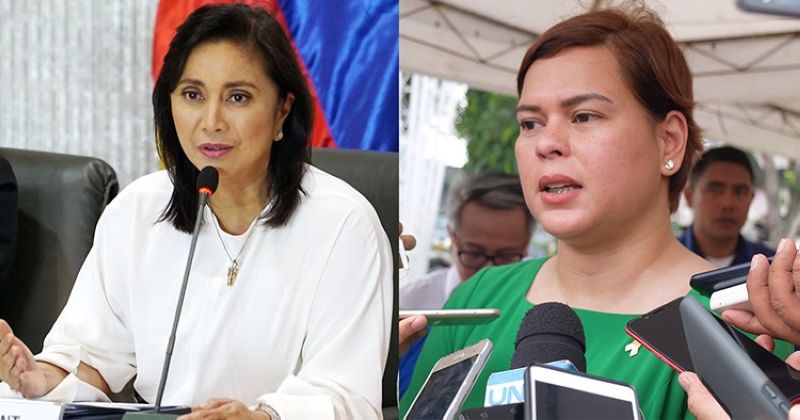 This is in response to the Vice President's statement in her radio interview on Sunday morning, June 13, saying that the Davao City Government should look at how Cebu City successfully controlled the surge of Covid-19 infections through private partnerships and the active presence of the medical community.

"Kasi kung titingnan mo ngayon na nagsaspike na, sa Cebu parang controlled, ‘di ba? Parang controlled and marami ang ginawa -- ang partnership doon hindi lang talaga LGU [local government unit] pero very active doon ang medical community. In fact, nung pumunta kami, nakatrabaho talaga namin ang medical community. Very, very active sila doon (If you look at the spike, in Cebu it looks like it is controlled, right? It looks like it is controlled and there are a lot of things you need to do -- the partnership there is not just with the LGU but the medical community there is very active. They are very active there.)," Robredo said in her interview on BISErbisyong LENI aired on RMN dzXL Manila.

The Vice President, however, said that Davao City cannot be compared to Metro Manila because they have different “characteristics.”

Robredo, meanwhile, urged for a “whole-of-government approach” and should not treat the current Covid-19 pandemic approach as “business-as-usual” because transmission rates and infection cases are rising in the provinces, particularly in the Visayas and Mindanao regions, especially in Bacolod, Dumaguete, Tacloban, Iloilo, and Butuan.

In a statement forwarded by the Davao City Information Office on late Sunday evening, June 13, Duterte-Carpio told Robredo to "refrain from giving advice if she knows nothing about what is happening on the ground."

"This has been the hallmark of her term as VP, where she puts forth comments on matters and affairs she lacks understanding and knowledge on and does not offer anything helpful to solve a problem," the mayor said.

She added that the private sector has been "very helpful and has tremendously contributed" to the Covid-19 response in the city.

“The VP should not attack the medical community of Davao City as being inactive when they have been silently suffering and working tirelessly to help save lives since March of last year,” Duterte-Carpio said.

"She should open her eyes to the surge of cases in localities all around the world and she might be able to say that a surge in cases where 85 [percent] of the cases are asymptomatic is primarily identified by aggressive testing, coupled with tracing and isolation/quarantining," Duterte-Carpio said.

The mayor told Robredo that she should avoid "involving the Covid-19 surge in Davao City in her attempt at politicking."

"There will be a proper time to attack my performance as an LCE [local chief executive] in this pandemic if she dares to run for President," Duterte-Carpio said.

Robredo’s spokesperson Lawyer Barry Gutierrez, in an issued statement on Monday afternoon, June 14, denied the mayor’s claim that the Vice President is politicking the situation.

“Si VP [Vice President Robredo) ang pilit hinahatak sa usapin ng pamumulitika habang ang buong focus niya nasa pagtulong (It is the VP who is being dragged in the issue of politics, while she is currently focusing in helping others),” Gutierrez said.

He also said the Vice President had been working and listening to the people on ground, asking for long-term solution in addressing the pandemic.

Davao City, currently under modified enhanced community quarantine (MECQ), recently topped the Octa Research's list of the local government units (LGUs) with most new cases per day during the period of June 5 to 11.

The mayor sought the help of Inter-Agency Task Force on Emerging Infectious Diseases (IATF) to revert the city to MECQ to address the shortage of bed capacity in both hospital and treatment facilities.