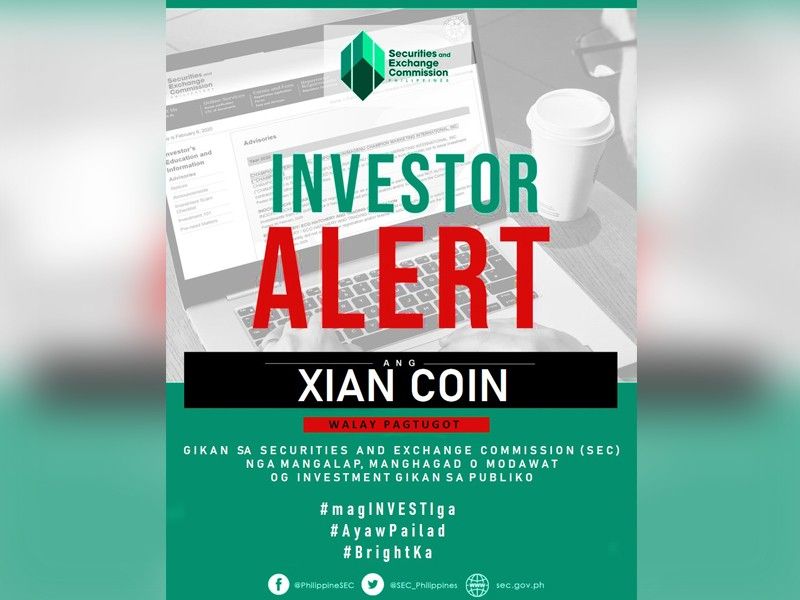 THE Securities and Exchange Commission (SEC) has warned the public against engaging with digital currency Xian Coin or XNC operated by the infamous "coffee date" scammer Xian Gaza or Christian Albert Gaza.

The advisory issued on June 7 by the SEC Enforcement and Investor Protection Department (EPD) strongly warned the public that Xian Coin or XNC clearly indicates it is a Ponzi Scheme.

A Ponzi Scheme is a fraudulent investment strategy where the money from new investors are used in paying “fake profits” to prior investors and is designed mainly to favor its top recruiters and prior risk takers. The scheme leads victims to believe that profits are coming from legitimate businesses when it actually is sourced from other investors.

The EPD investigation found that Xian Coin convinces would-be investors they will enjoy “a high range of price stability and appreciation of value due to the fact that it is taking advantage of a single, centralized supply chain” and is “independently controlled by virtual crypto currency bank of Xian Gaza with a limited global supply of 75 million XNCs.”

“While cryptocurrency is not illegal since the Bangko Sentral ng Pilipinas has regulated the cryptocurrency exchanges, what makes XNC dubious is that it has no SEC registration and it does not have the required license from SEC to solicit investments.

Please take note that any corporation who wishes to engage in investment-taking should have a secondary license in order to operate,” SEC Cebu Extension Office Securities Counsel Atty. Giness Marie Teves said.

Based on its website https://xianco.in/ Xian Coin is a centralized digital currency powered by the Etherium Blockchain that is exclusively traded by its coin holders. It says, “it is owned and issued by a virtual cryptocurrency bank where you can exchange your coins to Xian Coin, Colombian Peso, Mexican Peso, Brazilian Real, Peruvial Sol and Philippine Peso.”

The same also states that the primary function of Xian Coin is to create a powerful, unregulated and untraceable financial payment system that will power transactions and businesses across geographical spheres.

Once the investor has transferred funds via GCash and Bank Transfer, he or she will be told to get a screenshot as proof and send this to the admin page. He/she will then be asked to fill out the Xian Coin info sheet to be provided by the page admin together with 1 valid government issued ID. He/she will then be asked to go and join the official Facebook group that will be given by the admin page.

The Commission explained that based on this strategy, Xian Coin partakes of the nature of securities in the form of investment contract due to its centralized nature and as such subject to the Commission’s regulatory authority.

Xian Coin was also tested using the Howey Test. The test refers to the U.S. Supreme Court case for determining whether a transaction qualifies as an investment contract.

Under the Howey Test, an investment contract exists if there is an “investment of money in a common enterprise with a reasonable expectation of profits to be derived from the efforts of others.”

The Howey Test is also important for situating blockchain and digital currency projects with investors and project backers.

The U.S. SEC in its investigative report in “The DAO” case, said that “securities law may apply to various activities, including distributed ledger technology, depending on particular facts and circumstances, without regard to the form of the organization or technology used to effectuate a particular offer or sale.”Hence, the SEC EPD said, the investment of money in Xian Coins pooled by Xian Gaza, motivated by expectation of profits generated from their supposed price appreciation from the promotional efforts of Xian Gaza, constitute an investment contract.

Further, the SEC reminded the public of Gaza’s unsavory reputation, who himself proclaimed he is the “Pambansang Scammer” and boasted that money from Xian

Coins will bankroll his illegal activities.

“This should forewarn the public that Mr. Gaza or for that matter Xian Coin could not be trusted,” Teves said.

Gaza, whose name went viral in 2017 when he asked Filipina actress Erich Gonzales on a date using a billboard, was already a subject of a previous SEC Advisory for his Cristiano Alberto Real Estate Fund (CARE Fund).

He became news fodder anew in 2018 when he announced on Facebook that he was going to jail for violating the Bouncing Check Law.

Gaza is active on Facebook and is living abroad. (PR)