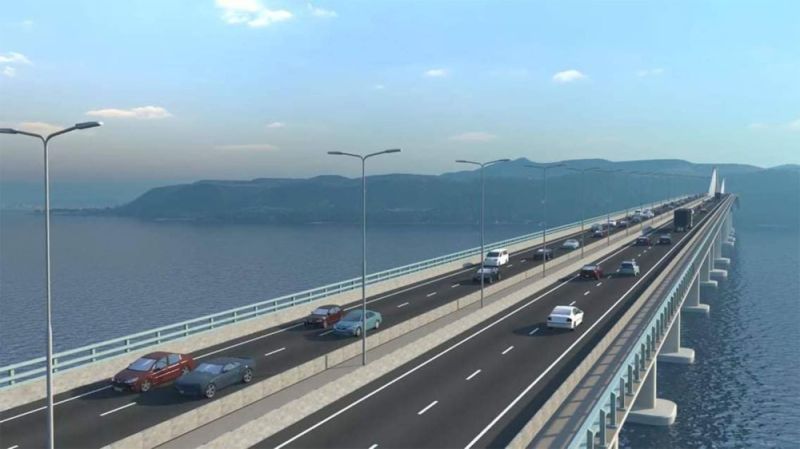 "Mangutana ko sa DPWH kung asa na ang amoang tulay? Kay hapit na lang ko namatay, asa naman ning tulay namo? Kay kung ani na lang man gani, ma-Covid napud ko, dalahon nalang tamo. Mga y*** mo. Klaruha mi ninyo diha. Unsa man gyud? (I want to ask DPWH. Where is the bridge? I almost died and there seems to be no bridge. If that is the case and if I get Covid-19 again, I will bring you here. You have to be clear with us)," Uy said in an interview on 87.5 FM Davao City Disaster Radio on Monday, June 14.

The mayor also asked DPWH Undersecretary for Unified Project Management Office (UPMO) Operations Emil K. Sadain about the concrete plans on the construction of the bridge.

The mayor segued his statement on the Davao-Samal Bridge after his condition became severe after testing positive with Covid-19.

Uy said he had his near death experience when he was quarantined anew after experiencing severe conditions for three days.

Uy said he is set to be discharged but he will still undergo quarantine and is awaiting to undergo repeat swabbing.

The mayor also revealed in the interview that he and his mother both tested positive. But he said his mother, who has existing comorbidities, succumbed from the virus.

Uy said he will continue to impose strict measures in the island, which is currently experiencing a surge of cases.

The mayor admitted the island's sole Covid-19 referral hospital is almost fully occupied and they are struggling to manage the patients due to the surge.

Based on their contact tracing history, most transmissions are happening within households.

According to the Davao del Norte Provincial Health Office as of June 13, Igacos has logged 481 confirmed cases, wherein 93 are active cases, 371 have recovered, and 17 died.

Meanwhile, Uy is among those who are waiting for the bridge project to commence. He foresees that the bridge will uplift the island's economy.

The mayor said in a previous radio interview that the groundbreaking was projected to commence in January this year, according to Public Works and Highways Secretary Mark Villar.

DPWH and China Road and Bridge Corporation (CRBC) signed the P19.32 billion official contract, which marks the green light for the design and build of the 3.98-kilometer Davao-Samal Bridge Project.

DPWH said the China-funded project is envisioned as a modern bridge that will connect the Samal Circumferential Road in Barangay Limao, Island Garden City of Samal to Davao City in between R. Castillo-Daang Maharlika junction.

Neda said the project involves the construction of a toll-free four-lane [two-lane each direction] bridge with an approximate length of 2.80 kilometers, a width of 24.2 meters, and a vertical clearance of 45 meters that can serve around 25,000 vehicles a day.

They also said the project will include the construction of interchanges with the existing road network, local existing junction improvements, viaducts over sections of land and approach bridges over marine areas.