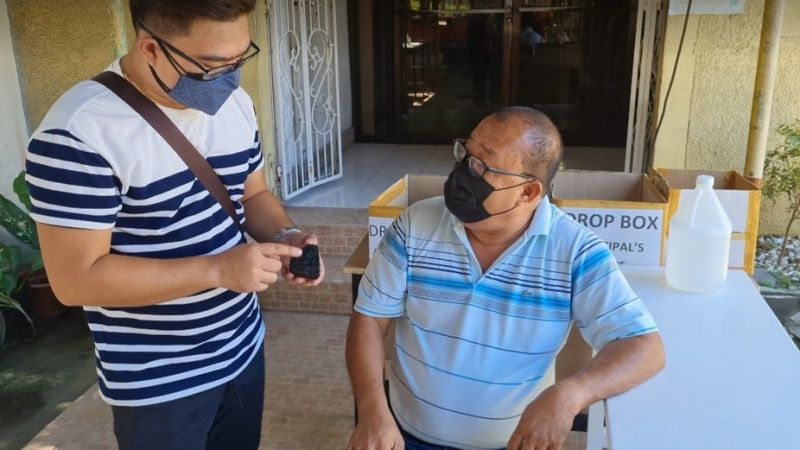 BACOLOD. Negros Occidental High School Principal Mario Amaca (right) shows this writer the stone believed to be a meteorite that recently fell in their school grounds folllwing the examination conducted by a team from Department of Environment and Natural Resources-Mines and Geosciences Bureau in Western Visayas Monday, June 14, 2021. (Contributed photo)

THE alleged burning stone that recently fell at the grounds of Negros Occidental High School (NOHS) in Bacolod City was found to have a metal component that is also present in a meteorite locally known as "bulalakaw."

A team from the Department of Environment and Natural Resources-Mines and Geosciences Bureau (DENR-MGB) in Western Visayas arrived at the school to examine the stone Monday, June 14, 2021.

Geologist Arnel Angelo Olarde, DENR-MGB focal person for Provincial Environment and Natural Resources Office-Negros Occidental, said the magnetic test is used to ascertain whether an object is a meteorite.

"A meteorite will attract the magnet as it has iron and nickel elements," he said, adding that in this case, it does not hold tight.

The team tried to chip the stone to further examine its mineral content. However, they have no tools to use.

It is hard to break the stone into pieces, so they recommended to send it to the National Museum of the Philippines in Manila for a laboratory test.

Mario Amaca, principal of NOHS, said he has already coordinated with the National Museum for the conduct of the "confirmatory" test.

Amaca said they will send the stone to Manila as soon as travel restrictions have been eased.

"Let us wait for the result. We will keep the stone for the meantime," he added.

On Sunday evening, the school official said that as per initial assessment of the National Museum using the images and videos of the stone, there was a 70 to 80 percent probability that it was a meteorite.

It can be recalled that the "burning stone" reportedly fell near the baracks of the security guards inside the school premise around 4 p.m. of June 4.

A wife of a security guard found the three-inch rock believed to be a meteorite following a loud burst similar to an exploding electric transformer.

It destroyed a trunk of Gemelina tree and styrofoam box.

"The stone was burning," Amaca said, qouting the staff who first found the object and brought it at his office.

The black stone is smooth, light and can fit a palm.

Once confirmed that it is a meteorite, it will be used by the school for its special science classes.

"It is a blessing for us as it will enable our students to see an actual meteorite if ever," Amaca said, as he dismissed claims by some that the it was just a hearsay.