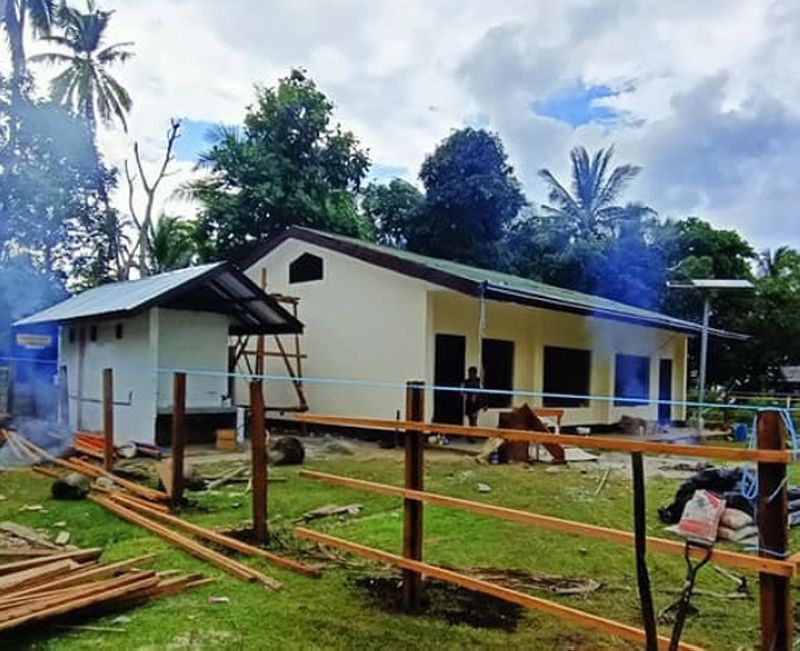 ZAMBOANGA. The 4th Marine Brigade and the University of Santo Tomas Golden Corps of Cadets "Maghari" Class of 1991 renovate a primary school in Bual village, Luuk, Sulu, providing a conducive learning environment to students in the area. (SunStar Zamboanga)

ACKNOWLEDGING that the future of Sulu depends on the strong foundation of the children, the 4th Marine Brigade (MBde), together with partner groups, renovated the dilapidated two-classroom building and its facilities of a primary school in a remote village of Sulu.

Songano said a "do it yourself" wash stand and an internet-ready for e-learning flat-screen smart television (TV) for the Children's Free Library were also turned over to education and village officials.

Songano said the project was realized through the collaborative efforts of the 4MBde, the kind-hearted Support Opportunities for Academic Resources (Soar) Projects of the University of Santo Tomas Golden Corps of Cadets (USTGCC) "Maghari" Class of 1991 of which Colonel Gregorio Hernandez, 4MBde deputy commander, is a proud member, and with the support of the Parent-teachers Association (PTA) members and the Bual village officials.

Hernandez said the members of the (USTGCC) "Maghari" Class of 1991 have defied the pandemic to undertake the project, which is the first phase.

"The Maghari Class 91 has just begun this noble endeavor as they will accelerate the gear as they pursue the phase II of their project," Hernandez said.

He said the second phase of the project is to provide free internet connectivity in the classroom and children's library "so that the school children will be able to connect to the Department of Education (DepEd) One Learning System.”

Songano said the future of Sulu province depends on the strong foundation of the children and "literacy is one of the pillars that must be provided for the youth, if only to ensure that the lasting peace and development will be achieve."

Songano reminded the students to maintain cleanliness of their newly renovated classrooms and newly constructed comfort rooms for the next batch of students.

He also challenged the pupils to finish their study to become professionals someday and never join any violent groups such as the Abu Sayyaf.

He added that renovated school building and facilities were turned over to education and village officials in a simple ceremony held on Thursday, June 10. (SunStar Zamboanga)