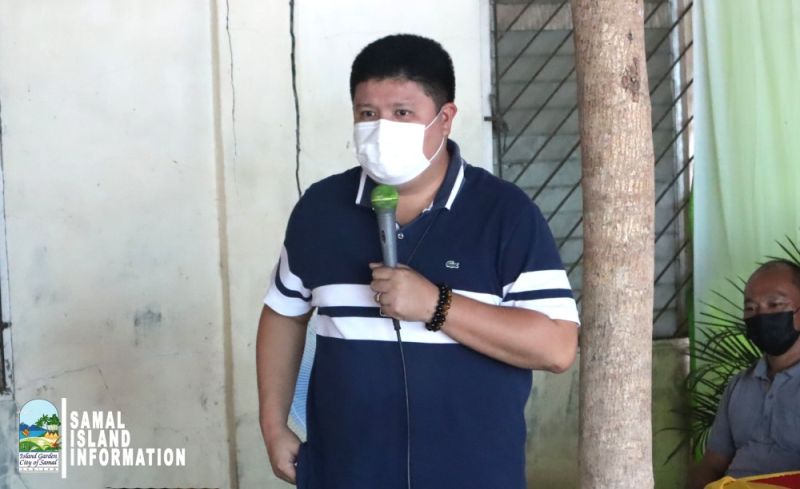 ISLAND Garden City of Samal (Igacos) Mayor Al David Uy apologized to the Department of Public Works and Highways (DPWH) a day after he aired his frustration on the delayed construction of the Samal Island-Davao City Connector Project (Davao-Samal Bridge).

"Nadala lang pud ta sa emosyon, sa frustration. Ako, nakapamalikas ta. Mangayo lang ko og dispensa sa DPWH sa nasulti nako. Pasaylua lang ko tungod sa nahitabo sa akoa (I was carried away by my emotions and frustration. I said hurtful words. I would like to apologize to DPWH for the words I said. Pardon me because I am going through something)," Uy said in an interview on 87.5 FM Davao City Disaster Radio on Tuesday morning, June 15, 2021.

Uy, in a radio interview on Monday, June 14, questioned the DPWH over the delays in the construction of the Davao-Samal Bridge, which was initially slated for groundbreaking in January this year.

"Mangutana ko sa DPWH kung asa na ang amoang tulay? Kay hapit na lang ko namatay, asa naman ning tulay namo? Kay kung ani na lang man gani, ma-Covid napud ko, dalahon nalang tamo. Mga y*** mo. Klaruha mi ninyo diha. Unsa man gyud? (I want to ask DPWH. Where is the bridge? I almost died and there seems to be no bridge. If that is the case and if I get Covid-19 again, I will bring you here. You have to be clear with us)," the mayor said.

The mayor also asked DPWH Undersecretary for Unified Project Management Office (UPMO) Operations Emil K. Sadain about the concrete plans on the construction of the bridge.

Uy also apologized to Sadain and DPWH Secretary Mark Villar for his statement.

In the recent interview, Uy said officials from DPWH already reached out to him right after the interview.

He said officials from DPWH will formally meet with him to give updates on the construction of the bridge in the coming weeks.

Uy admitted he was carried away by his emotions brought about by his personal struggle.

The mayor, who recently tested positive for coronavirus and was in severe condition, lost his mother to Covid-19.

He also said he shared the sentiments of his constituents who had been longing for the bridge for many years now.

Uy also cited the oppositions on the alignment of the bridge as another factor for the delays in the construction of the Davao-Samal Bridge.

The Rodriguez and Lucas family, whose property will be affected by the construction of the bridge, aired opposition as it will cause a detrimental impact on marine life where the bridge will be aligned.

"Basta naa gyud mu-dispute sa (Whenever there is a dispute on the) right of way issue, ma-delay gyud na siya. Naa man pud sila'y (expect that there will be delays. But they have the) right to challenge the project," Uy said.

He said they already had expropriation proceedings, which were already enacted through a resolution passed in the City Council.

The mayor did not elaborate further on the merits of the dispute.

He said, however, that he is hopeful that the construction of the bridge will still materialize despite several delays.

"Ang amo lang sa city, i-andam namo ang tulay kay (On the part of the city, we will prepare for the bridge as) it will be a massive development," the mayor said.

DPWH and China Road and Bridge Corporation (CRBC) signed the P19.32 billion official contract, which marks the green light for the design and construction of the 3.98-kilometer Davao-Samal Bridge Project.

DPWH said the China-funded project is envisioned as a modern bridge that will connect the Samal Circumferential Road in Barangay Limao, Island Garden City of Samal to Davao City in between R. Castillo-Daang Maharlika junction.

The bridge will have four-lanes [two-lane each direction] with an approximate length of 2.80 kilometers, a width of 24.2 meters, and a vertical clearance of 45 meters that can serve around 25,000 vehicles a day.