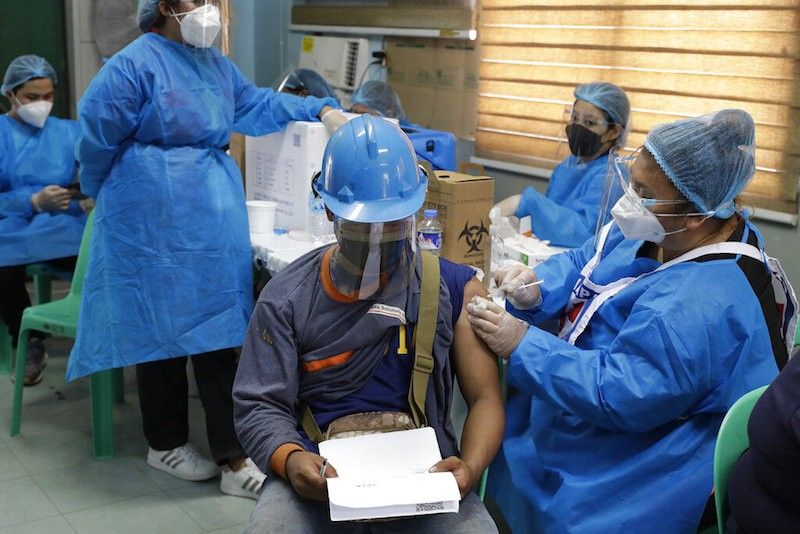 MANILA. A worker is inoculated with China’s Sinovac Covid-19 vaccine by nurse Lorna Ruanto at the Navotas Fish Port in Metro Manila on June 7, 2021. (AP)

(UPDATED) With the arrival of additional vaccines against coronavirus disease 2019 (Covid-19), inoculations accelerated in the last seven days nationwide.

Awaiting their second dose are 3,189,161 individuals as first dose inoculations reached 5,068,855, around 6.7 percent of the estimated 74 million individuals eligible to get the vaccine under priority groups A1 to A5.

The government is inoculating priority groups A1 (health workers, mayors, governors), A2 (senior citizens), A3 (persons with comorbidities) and A4 (government, private and informal sector workers who have to be physically present in their workplace as well as police and military).

Depending on the supply, some local government units (LGUs) may also administer the AstraZeneca-Oxford and Pfizer-BioNTech (Comirnaty) vaccines from Covax to group A5, or the indigent population.

As of June 13, 1,447,426 healthcare workers and others under A1 have received at least one dose. Of this number, 968,750 have also received the second dose. Under the government's national deployment and vaccination program, the target is to inoculate 1,762,994 health workers.

Vaccination of workers kicked off only on June 7 although ceremonial inoculations were also held on Labor Day on May 1, 2021. As of June 13, only 7,021 have been fully vaccinated out of the 152,964 workers, policemen and military personnel who have received their first dose. There are an estimated 35.5 million individuals under A4 nationwide.

The government initially prioritized vaccinations in NCR Plus 8, consisting of the National Capital Region, Metro Cebu, Metro Davao, Batangas, Bulacan, Cavite, Laguna, Pampanga and Rizal. President Rodrigo Duterte, however, has directed vaccine czar Carlito Galvez Jr. to also distribute the vaccines to other regions, especially those that are experiencing a surge in Covid-19 cases.

In a statement, DOH repeated its appeal to eligible citizens to get the vaccine. Those who have received the first dose are encouraged to get the second dose to protect themselves from severe Covid-19, which could lead to death. (Marites Villamor-Ilano / SunStar Philippines)