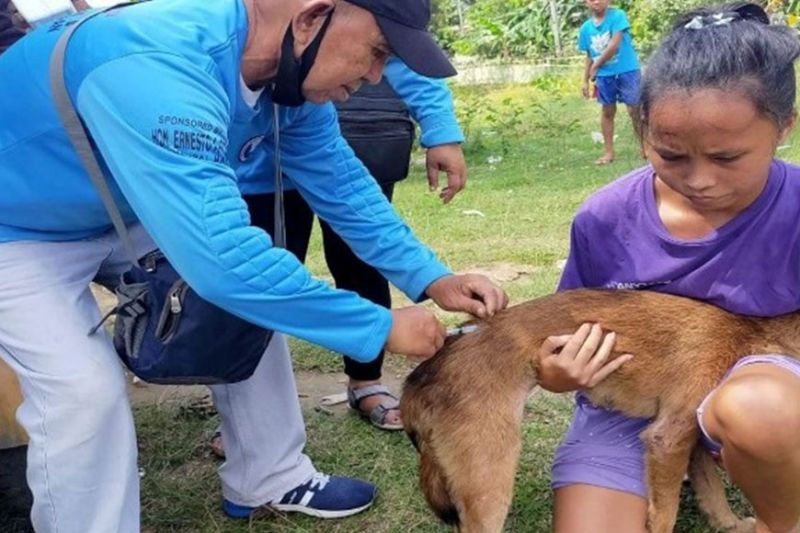 NEGROS OCCIDENTAL. Rabies mass vaccination is one of the series of activities conducted by the Provincial Veterinary Office to curb the spread of rabies cases in the province. (Contributed photo)

THE Provincial Veterinary Office (PVO) of Negros Occidental has noted 13 confirmed canine rabies cases among dogs in eight localities in the province from January to May 2021.

The figure was 39-percent higher compared to six cases in the same period in 2020.

Provincial Veterinarian Renante Decena said the increase was attributed to restrictions imposed since last year due to the coronavirus disease (Covid-19) pandemic.

PVO records showed that as of May 2021, the top three local government units (LGUs) with the highest number of canine rabies positive cases are Himamaylan City followed by Victorias City and Cauayan town, respectively.

The PVO, through its Provincial Veterinary District Field Units, in coordination with these LGUs, conducted immediate massive vaccination.

A total of 74,781 dogs were vaccinated provincewide against rabies, serving 47,506 dog owners.

A total of 468 stray dogs, meanwhile, were impounded by LGUs with a dog impounding facility.

Of the number, 437 were terminated and 31 were redeemed and adopted.

Decena said the public is encouraged to follow standard protocols by having their dogs vaccinated at least annually against rabies.

He said owners should not allow their dogs to be on the streets to prevent contamination and spread of rabies.

Other measures included dog population control like spaying and neutering, compulsory leashing and movement control such as dog impounding.

He added while in cases of dog bites, victims are advised to seek appropriate medical attention as soon as possible since rabies has no treatment once the symptoms start to manifest.