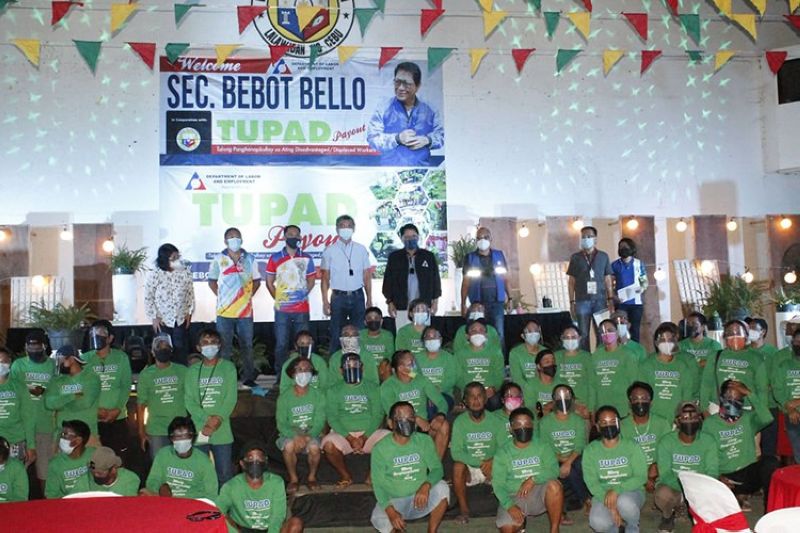 THE Department of Labor and Industry (Dole) 7 released more than P15 million worth of livelihood assistance and cash aid to Tupad program beneficiaries and overseas Filipino workers (OFWs) in four municipalities in northern Cebu.

Dole Secretary Silvestre H. Bello III was in Cebu last week to release the financial assistance to a total of 1,921 beneficiaries in the municipalities of Medellin, Santa Fe, Madridejos, and Bantayan.

The following is the breakdown of the distribution:

• In Medellin, 37 associations with 977 members received livelihood assistance worth almost P11 million. The amount will fund the beneficiaries’ various livelihood projects, such as motorcycle spare parts and repair; hog raising and marketing; chairs, tables, and tent rental services; and muscovado production and marketing, among others.

• In Santa Fe, a total of P1.2 million for the salaries of 302 Tupad workers was given.

Tupad stands for Dole’s Tulong Panghanapbuhay sa Ating Disadvantaged/Displaced Workers that provides emergency employment for displaced workers, underemployed, and seasonal workers for a minimum period of 10 days, but not to exceed a maximum of 30 days, depending on the nature of work to be performed.

Bello said that Dole’s implementation of its programs and services amid the Covid-19 pandemic is due to the support of President Rodrigo Duterte.

He said Dole will continue to deliver its various programs and services to help workers who have been suffering for more than a year due to the pandemic.