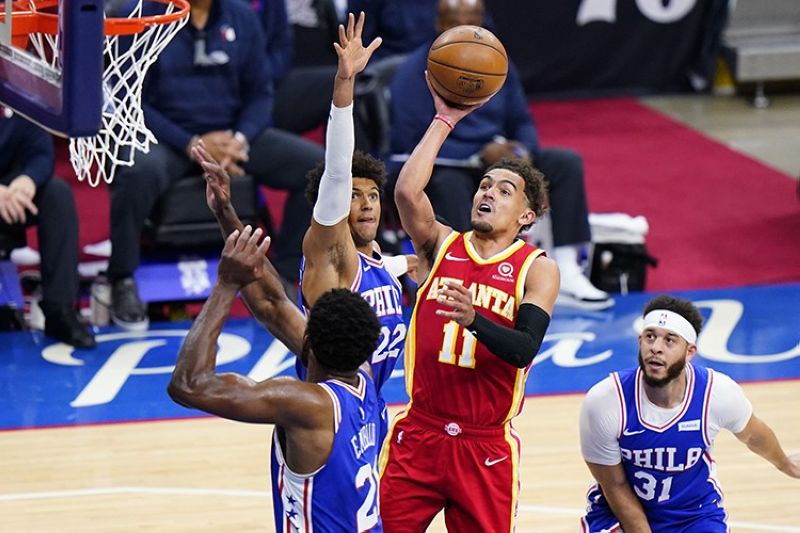 Atlanta Hawks' Trae Young (11) goes up for a shot against Philadelphia 76ers' Joel Embiid (21), Matisse Thybulle (22) and Seth Curry (31) during the second half of Game 5 in a second-round NBA basketball playoff series, Wednesday, June 16, 2021, in Philadelphia. (AP Photo/Matt Slocum)

PHILADELPHIA — Trae Young and the Atlanta Hawks pulled off a playoff comeback for the ages against the Philadelphia 76ers to move within a victory of the Eastern Conference Finals.

Young was fouled on a 3-pointer and hit all three free throws with 1:26 left to cap a 26-point comeback and send Atlanta on its way to a 109-106 victory over the 76ers on Wednesday night in Game 5.

The Hawks won in Philadelphia for the second time in the series and can advance to the conference final for the first time since 2015 with a victory Friday night in Atlanta.

Young scored 39 points and added to a postseason where he has become a breakout star.

Joel Embiid scored 17 points in the first quarter and had the Sixers on their way toward a romp with a 26-point lead in the first half. They still led 87-69 at the end of the third before they collapsed.

Embiid finished with 39 points, and Seth Curry had 36.

SALT LAKE CITY — Paul George scored 37 points and grabbed 16 rebounds to lead the Clippers to a victory over the Jazz in Game 5 of their Western Conference semifinals series.

Marcus Morris scored 25 points and Reggie Jackson added 22 for the Clippers. Los Angeles won its third straight game to push the top-seeded Jazz to the brink of elimination. The Clippers shot 51% from the field without Kawhi Leonard in the lineup.

The Jazz trailed the entire fourth quarter after making just six baskets in the third quarter. Utah cut the deficit to 100-97 when Mitchell converted a 3-point play with 5:46 left. Jackson answered with back-to-back baskets to squelch a Jazz comeback. Utah could draw no closer after that point. (AP)