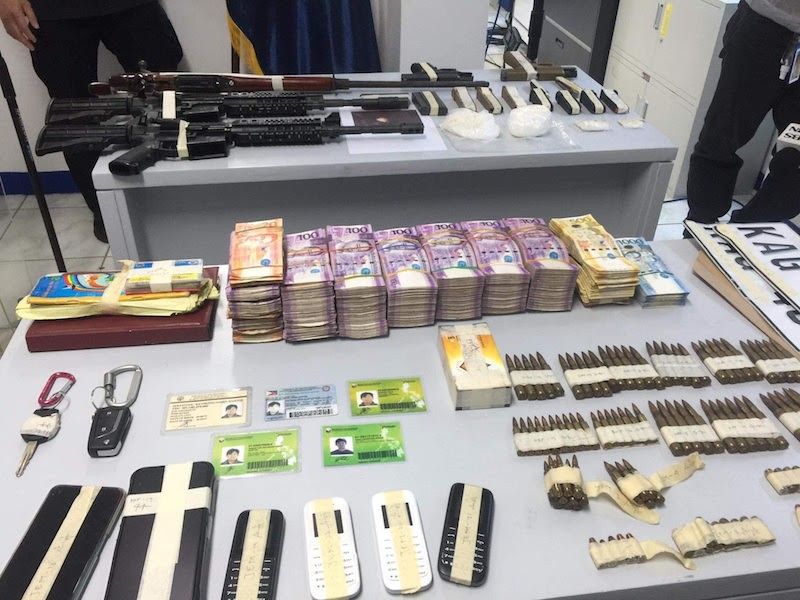 MANILA. Illegal firearms, ammunition, drugs and other items were seized from two vehicles believed to be owned by a former town mayor in Maguindanao, who was also a former Special Action Force personnel. (Third Anne Peralta-Malonzo) 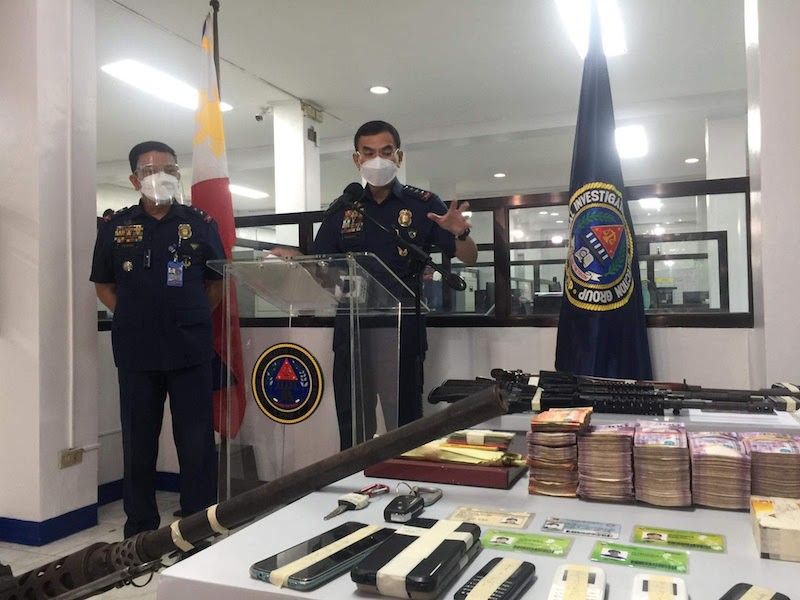 MANILA. Philippine National Police Chief Guillermo Eleazar on June 17, 2021 presents the Illegal firearms, ammunition, drugs and other items that were seized from two vehicles believed to be owned by a former town mayor in Maguindanao, who was also a former Special Action Force personnel. (Third Anne Peralta-Malonzo)

Eleazar said Montasser Sabal was arrested by Criminal Investigation and Detection Group (CIDG) operatives upon arrival at the Batangas Port Wednesday evening, June 16, via a roll-on-roll-off vessel from Mindanao.

While on their way to the CIDG main office in Camp Crame, Quezon City, Sabal allegedly grabbed the gun of one of his police escorts which prompted the cops to shoot him.

He had a standing arrest warrant for violation of Republic Act 9516, or Unlawful Manufacture, Sales, Acquisition, Disposition, Importation or Possession of an Explosive or Incendiary Device and of Republic Act 9165, or the Comprehensive Dangerous Drugs Act of 2002.

Recovered from his vehicle were various firearms and ammunition and around 28 grams of methamphetamine hydrochloride (shabu) valued at P200,000.

Police also searched another vehicle parked at the port, which is also believed to be Sabal’s, and also found various firearms, grenades, mortars and ammunition and P2.5 million worth of shabu.

Eleazar said Sabal was a member of the PNP Special Action Force from 1998 to 2008 with specialized training on intelligence, urban counter revolutionary warfare course, explosive ordnance disposal and sniper’s course.

“During his incumbency, he was charged by the Office of the Ombudsman and eventually suspended for failure to disclose his properties and business interests in his SALN from 2011 to 2015. Further, information revealed that he failed to initiate and propose legislative measures to the Sangguniang Bayan for the Municipality's anti-illegal drugs program as mandated under RA 9165,” Eleazar said.

“He was also considered as a narco politician guilty of dishonesty and neglect of duty that is why order for his dismissal was issued and affirmed by the Supreme Court. Siya yung mga nauna na napasama doon sa mga sinasabing narco politicians and ang basis naman natin nun is nagkaroon talaga siya ng kaso and warrant for his arrest for illegal drugs as well as illegal possession of explosives,” he added

Eleazar said Sabal was also allegedly involved in the Davao City bombing in September 2016, an act of terrorism owned by the BIFF. (SunStar Philippines)