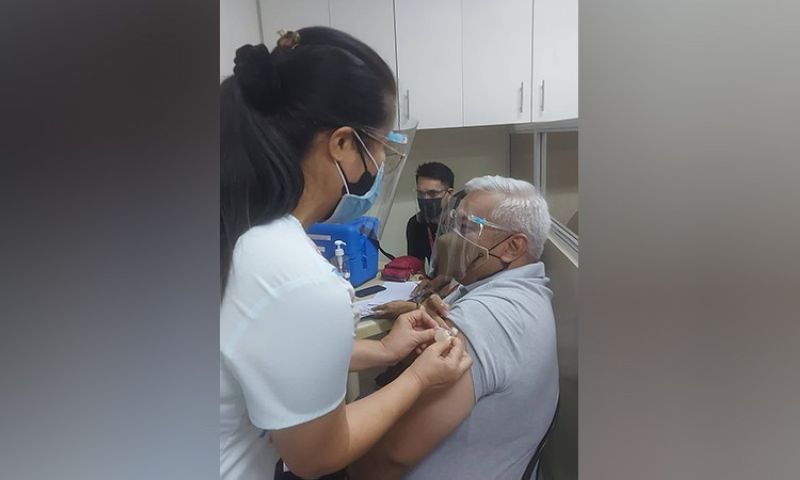 ANGELES City Mayor Carmelo Lazatin Jr. is now fully vaccinated, as he received his second dose of Sinovac Covid-19 vaccine on June 16, 2021 at the City College of Angeles (CCA).

"I am encouraging everyone to get vaccinated and be part of the solution. This will protect you and your loved ones against the virus," Lazatin said after receiving his second dose of Sinovac administered by City Health Officer-in-Charge Dr. Verona Guevarra.

Last May 2021, he Inter-Agency Task Force (IATF) approved the inclusion of local chief executives under the priority group.

To date, the Angeles City Government is conducting its ongoing inoculation at the CCA to priority groups A1 or health workers, A2 or the elderly, A3 also known as persons with comorbidities or those with existing health conditions, and A4 or frontline personnel in essential sectors including uniformed personnel and those in working sectors identified by the IATF.

Records from the vaccination center show that as of June 16, 27,673 Angeleños from the mentioned priority groups got their first shot of vaccines, while 5,070 completed their two doses of vaccine.

The vaccines administered -- Astrazeneca and Sinovac -- were donated by the Department of Health (DOH).

Meanwhile, the inoculation in the second designated vaccination site in Angeles City National High School (ACNHS) will begin on June 29, 2021.

This was confirmed by Lazatin's Chief Adviser and Tactician IC Calaguas, who recently supervised the installation of 17 computer units, 16 air coolers, and four tents placed at the new vaccination site.

"Beginning June 29 onwards, Angeleños scheduled for their second dose of vaccine would have to go to ACNHS," Calaguas said.

According to Calaguas, medical staff from the City Health Office and Rafael Lazatin Memorial Medical Center will be assigned at ACNHS -- seven vaccinators, eight doctors, and 100 support staff.

With the second vaccination area, the City Government could inoculate a total of 4,000 residents daily.

Through this, Lazatin urged Angeleños to register via the online survey for the Covid-19 vaccination at angelescity.gov.ph, and participate in the household survey being conducted at the 33 barangays by teams deployed by the city government, headed by Gender and Development Officer Mina Cabiles.

Cabiles said that 31 out of 33 barangays have already been surveyed. (PR)