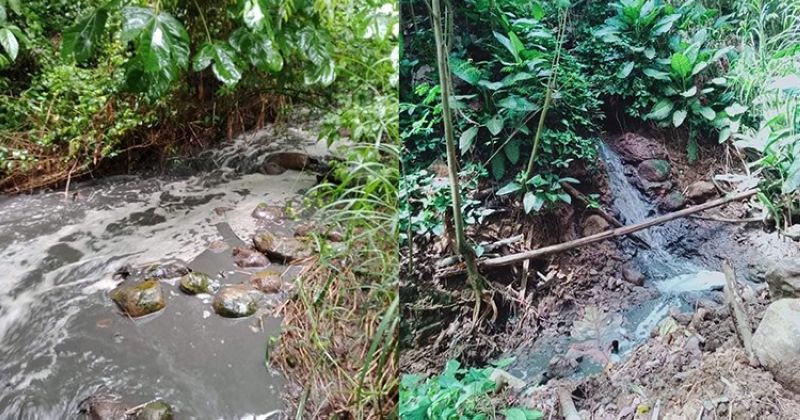 AN ENVIRONMENTAL group has endorsed to the Watershed Management Council (WMC) the complaint letter of a group of residents from Barangay Tamugan against a piggery farm for discharging animal wastes flowing toward Tamugan River.

In a press statement forwarded to SunStar Davao, Interfacing Development Interventions (Idis) said residents in Barangay Tamugan in Marilog District have been complaining about the foul-smelling, dark-colored, wastewater discharged by a nearby piggery in the area.

According to the letter forwarded by some residents to Idis, several discharges were made and mostly during heavy rains.

Among the discharged wastes are manure, urine, and washing wastewater directly going to the water bodies without any treatment.

"This issue has been detrimental to the health and properties of the residents nearby, especially during rainy days. Accordingly, several children from the community have experienced stomachache, fever, among others due to the foul smell of the discharges. People swimming and crossing the river near the piggery were also observed to have experienced skin itching, diarrhea, and fever," Idis said.

In addition, the wastes coming from the piggery also finds its way to Tamugan River, a tributary of Davao River, contributing to the deterioration of the river’s water quality.

The group said the farm was already inspected several times by the Watershed Multipartite Monitoring Team and endorsed recommendations and remarks to the owner of the farm.

"The last inspection was on April 28, 2021, and the team noted improvement in the operation of JML. But despite this, the piggery farm continues to release foul-smelling wastewater and the most recent was on May 12 and May 30, 2021, according to some nearby residents," Idis said.

The group said inadequate wastewater management has resulted in major water-quality issues in many parts of the country, exacerbating the water crisis.

"Water scarcity is caused not only by physical shortage but also by the gradual deterioration of water quality in many cities, lowering the amount of water that is safe to use," it said.

Idis Executive Director Mark Peñalver told SunStar Davao in a phone interview that they endorsed the matter to WMC and the office of Mayor Sara Duterte-Carpio.

Peñalver said that while the piggery is outside the watershed conservation area and the lagoon they constructed is located a few meters away from the river, they still committed violations as the waste overflowed toward the river.

"The act of releasing untreated wastewater padulong didto sa sapa, kay ginaingon lage nila nga wala sila kabalo nga naay release didto kay abi nila didto na-release sa ilang lagoon, pero gaapaw man gyud siya (along the river, wherein they even reasoned out that they are not aware that the wastes are overflowing from the lagoon towards the river)," he said.

"Whether intentional or not, the mere act of releasing wastewater padulong sa body of water nga untreated is already a violation of the Clean Water Act (because) you cannot discharge any waste water untreated without a discharge permit," he added.

Peñalver said he is hoping that the piggery will be given sanctions for various sanctions repeatedly committed.

He also revealed that some piggeries and poultry farms are committing similar violations.

He said the City Government and the Department of Environment and Natural Resources should immediately take action in sanctioning farms dumping wastes into streams, rivers, and lakes.

Peñalver said they are currently proposing the amendment of the Watershed Code.

He said they are proposing that the entire Panigan-Tamugan watershed be declared as a protected area against activities that pose threat to the watershed.

He said the enlisted prohibitions within the protected area are currently limited.

Peñalver said they are pushing for the inclusion of the prohibited activities outside the conservation area that would still affect the body of waters within the protected area.

WMC, in May this year, passed two separate resolutions following the collected waste materials in the city's watershed, especially in the Panigan-Tamugan River.

According to the resolution, trekking activities in watershed areas in Davao City are now strictly prohibited, while recreational activities in these areas will be regulated.

The Davao City Government, in an issued statement, said the recent discovery of used face masks, face shields, and other "discarded" plastic wastes at Panigan-Tamugan "proves the effective collaboration" between the local government and civil society organizations to ensure the protection of the city's natural resources.

The City added the importance of the Bantay Bukid volunteers as the local government's partner in the upland communities.

"The LGU does not only share expressions of concern over the condition of our environment, including our watershed areas -- it is also very much alarmed by the irresponsible, reckless, and destructive human activities that threaten our forests and other natural resources," the local government said.

The watershed council also ordered the closure of various structures without building permits.

Another reported operation of an existing public swimming pool in Purok Tubaran in Barangay Tambobong, Baguio District was also inspected by WMMT on April 23.

WMC said advance copies of the inspection report are already furnished to the Business Bureau and Ocbo for appropriate action.