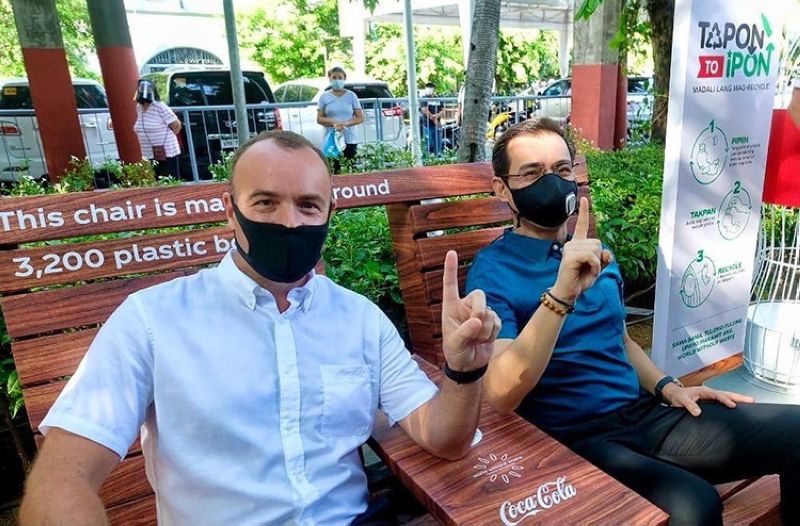 PARTNERS IN ACHIEVING A WORLD WITHOUT WATSE IN MANILA. CCBPI President and CEO Gareth McGeown and Manila City Mayor Isko Moreno sit comfortably on a bench made from over 3,000 pieces of transformed PET plastic bottles. The bench was manufactured by Winder Envirotech, a Davao-based recycling company. (PR) 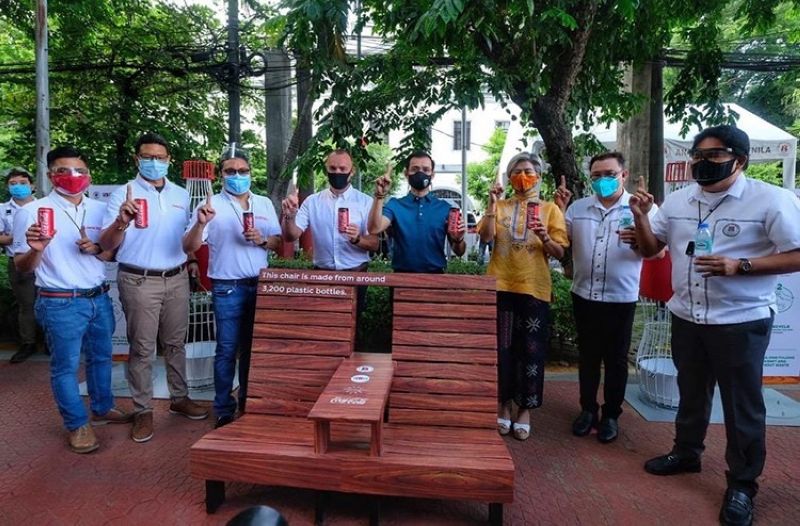 CCBPI REPRESENTATIVES led by President and CEO Gareth McGeown and Manila City LGU officials led by Mayor Isko Moreno and Vice Mayor Honey Lacuna. This PET bottle collection project for the city was made possible through the support of the Department of Tourism, Culture and Arts of Manila, as led by Director Charlie Dungo. (PR) 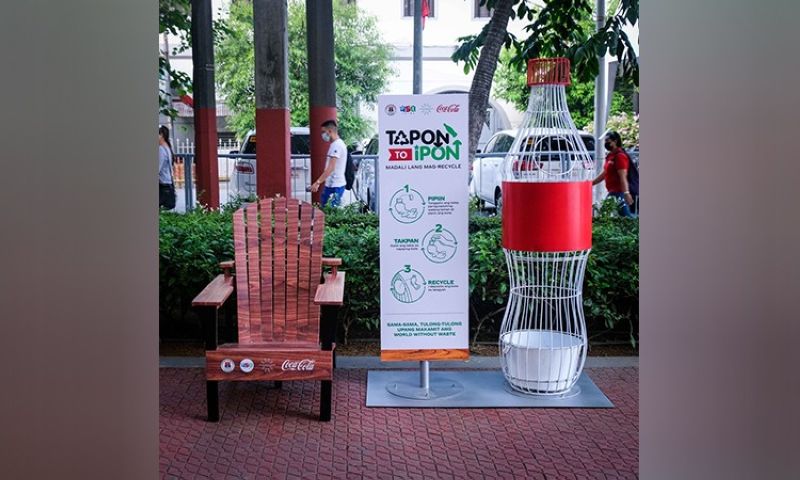 COCA-COLA Beverages Philippines Inc. (CCBPI), the bottling arm of Coca-Cola in the country, has signed a memorandum of agreement (MOA) with the City of Manila for the collection and recycling of PET bottles in the metro.

Under the MOA, clear PET plastic bottles -- regardless of brand or manufacturer -- deposited in contour bottle bins will be collected by Manila's Department of Public Services, and will then be hauled by CCBPI to its PETValue recycling facility in General Trias, Cavite. This is the first in a series of projects lined up for the City of Manila.

The wide-reaching sustainability project for the city was made possible through the support of the Department of Tourism, Culture and Arts of Manila (DTCAM), as led by Director Charlie Dungo and his team.

The City of Manila is the latest addition to the growing number of cities and municipalities that CCBPI is partnering with as part of its World Without Waste initiative, the company's commitment to collecting and recycling every single bottle and can that it sells by 2030.

"Coca-Cola and Manila, through the leadership of Mayor Isko, have always shared the same advocacies for sustainability and this partnership is just another testament to that," said McGeown. "We are very much excited to work with the City of Manila for PET plastic bottle collection, and in many more future projects that will realize our common goals."

McGeown added, "The ultimate aim is to collect every single PET plastic bottle within the city and divert it to PETValue. This would yield collective achievements-among them is helping keep Manila clean, while fostering the value of caring for the environment and strengthening the mindset for recycling."

Solid waste management remains a challenge across the country. PET plastic bottles are 100 percent recyclable and have value beyond their initial use -- and, therefore, should not end up in landfills or waterways. This recyclable material should re-enter the value chain as resource or feedstock for recycling, which will be processed at the PETValue facility.

Granted pioneer status in 2020 by the Philippine Board of Investments, PETValue Philippines -- a partnership between Coca-Cola and Indorama Ventures, a global leader in green tech and packaging solutions -- is the country's first, state-of-the-art, bottle-to-bottle, food-grade recycling facility. It will employ the safest and most advanced technology to sort, wash, and process used plastic bottles into new ones. The P1-billion facility is set to be completed in Q4 of 2021 and is expected to have a capacity to process around 3 billion pieces of plastic bottles annually.

Earlier this year, CCBPI opened a new distribution hub in Manila -- a true homecoming marking Coca-Cola's return to the city. Coca-Cola's new Manila site utilizes a smart logistics system, promoting innovative and advanced technologies in the country, and will thus serve as a model site for all Coca-Cola distribution centers. This is in line with the company's commitment to support economic recovery through the expansion of its nationwide footprint, which in turn will generate more jobs for Filipinos.

"We have always put our words into action, and we've proven throughout our 109-year stay in the Philippines that the support of Filipinos is integral to that," said McGeown. "We are unwavering in our commitment to help in the country's stable economic recovery -- we will continue to work with the national government, local governments, and various organizations across the Philippines. We truly believe that, because we have been coming together in solidarity, our best days are ahead of us." (Sponsored Content)